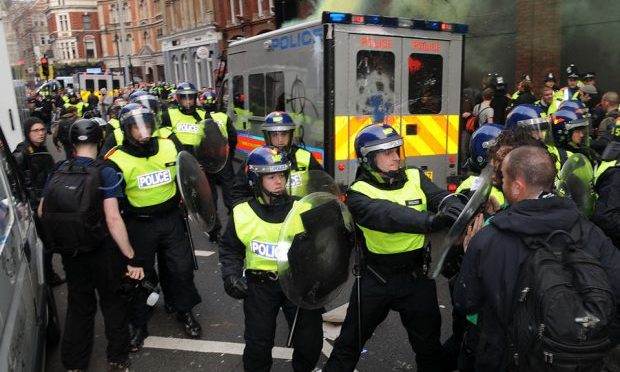 6 August 2021 marks the tenth anniversary of the start of the 2011 youth uprising (otherwise known as the England riots), a five-day-long eruption of pent-up anger by young workers who were sick to the back teeth of persistent police brutality, inequality, unemployment and poverty. Today, as capitalism’s 2009 crisis has been compounded by the 2020 ‘Covid’ world economic depression, the contradictions within our society are becoming ever more profound and widespread.

It is clearly only a matter of time before another such outburst occurs – even if the particular spark of outrage that lights the conflagration is hard to predict. The job of socialists and communists is to offer workers what they lacked during the last uprising: organisation and consciousness. To do this, we must continue to build our forces, uniting the broadest possible strata of the British working class under the banner of socialism.

Triggered by the point-blank police shooting of Mark Duggan, a 29-year-old father of three, in broad daylight in the Tottenham Hale area as he made his way home in a minicab, the protests of August 2011 quickly spread to the capital’s other powder-keg districts. Having begun peacefully as a vigil outside Tottenham police station – where Duggan’s family and friends were simply asking for dialogue with the authorities – the protesters became angered by the typically heavy-handed, callous and racist beating of a teenage girl, who was battoned to the ground by police.

“A 16-year-old woman … stepped forward to [speak to the] police around 8.30pm, demanding answers, but was attacked with shields and batons.

“‘They beat her with a baton, and then the crowd started shouting “run, run”, and there was a hail of missiles,’ said Anthony Johnson, 39. ‘She had been saying: “We want answers, come and speak to us” …

“Bailey said the girl was then ‘pounded by 15 riot shields’. ‘She went down on the floor but once she managed to get up she was hit again before being half-dragged away by her friend.’ (Tottenham riots: a peaceful protest, then suddenly all hell broke loose by Paul Lewis, The Guardian, 7 August 2011)

Rather than be forced off the streets, fierce resistance ensued, as more and more youth were drawn into the escalating battle, directly countering the police aggression rather than waiting for some indefinitely postponed inquiry and delayed ‘redress’. Students deprived of the education maintenance allowance and young unemployed workers used to routine stop-and-search, mistreatment and harassment at the hands of the police, joined in an outpouring of anger, rapidly escalating into an open conflict that threatened to overwhelm forces of the state.

Other poor, marginalised and oppressed communities across England were inspired by the events in London, taking to their own streets in cities such as Birmingham, Bristol, Coventry, Derby, Leicester, Liverpool, Manchester, Nottingham, West Bromwich and Wolverhampton.

The uprising lasted for a week – until 11 August – and although the police ceded the streets to the angry crowds while it lasted, over 3,000 people were later arrested. The sentences for those jailed were truly draconian, adding up to 1,800 years (an average sentence of six years for each person arrested).

Such was the ferocity of the subsequent police crackdown that one boy was sentenced to six months in prison for stealing a case of bottled water from Lidl worth £3.50. One mother was evicted from her council flat after her son was suspected of looting. Suffice to say, the British state worked tirelessly to punish and make an example of the protestors.

Typically, the mainstream media played its part in portraying the protestors as ‘feral thugs’ intent only on looting, and on committing wanton acts of violence and property damage against beleaguered small businesses. In fact, it was the police who initiated the violence, and were the principle target of the mass retaliation, whilst most property damage was targeted at large multinational corporations.

This false portrayal served a double purpose. First, it manufactured the general public’s consent for the brutal crackdown meted out against the protestors over subsequent months. Second, by stoking divisions amongst Britain’s poorest communities and turning those ethnic communities with strong shopkeeping connections, such as the Indians and the Turks in London, against the popular revolt.

Although looting did take place, this should come as no surprise given the incessant bombardment of marketing strategies aimed at the youth under our hyper-individualised, consumerist capitalist system. Our nation’s poorest proletarians, concentrated in a centre of vast corporate loot, living cheek-by-jowl with some of the richest people on earth and constantly witnessing their glut of consumerism and gluttony were expected to ‘respect the property rights’ of the wealthy, while subject to a draconiam police regime intended to keep them locked into their ghettos under conditions of mass underemployment, unemployment and poverty.

The horror of the government, media and official ‘society’ at this violation of corporate property, of the right of the capitalist minority to exploit the working-class majority, and their studied ignorance of the original sin that has led to the tottering inequality within society, the impoverishment of the mass of the working class by their wage-slavery, was ubiquitous. But it is precisely this primary injustice of capitalist exploitation that has led to the need for the persistent harassment of the impoverished youth by a police force whose fundamental role is to reinforce and perpetuate that primary injustice.

Does this not remind us of Marx and Engel’s acerbic critique of bourgeois morality in the Communist Manifesto?

“You are horrified at our intending to do away with private property. But in your existing society, private property is already done away with for nine-tenths of the population; its existence for the few is solely due to its non-existence in the hands of those nine-tenths. You reproach us, therefore, with intending to do away with a form of property, the necessary condition for whose existence is the non-existence of any property for the immense majority of society.

“In one word, you reproach us with intending to do away with your property. Precisely so; that is just what we intend.

“You must, therefore, confess that by ‘individual’ you mean no other person than the bourgeois, than the middle-class [capitalist] owner of property. This person must, indeed, be swept out of the way, and made impossible.” (1848)
The uprising also exposed the reactionary tendencies of those on the fake ‘left’. The Labour party revealed once again its contempt for the working class, labelling the young protestors as criminals, thugs and an “underclass”, and calling for increased police repression of their communities.

Reformists trumpeted policies to improve community relations with the police, as though it is was the police that were misunderstood, not the thousands of neglected and unemployed young people, who took to the streets to protest their disgust at the cold-blooded killing of one of their own. One thing was made clear, however: thousands of people began to realise the true role of the police under capitalism: that is, that they are a special body of (increasingly heavily) armed men, whose primary role is to enforce the dictatorship, the rule, and the system of exploitation of the bourgeois class.

Other opportunists sought to portray the uprising as a race issue, as ‘black v white’. However, by confusing the capitalists’ tactics (racism) with its strategy (economic domination), they played straight into the hands of the bourgeoisie, which is the real beneficiary of a divided working class. We are once again seeing a growing number of young people fall into this trap as they join the ranks of Black Lives Matter and other liberal identity politics-focused outfits.

What the reformists and opportunists’ respective positions showed was a complete lack of class-consciousness, a rejection of Marxism and scientific socialism, and an embrace of liberalism. Unfortunately, the unconscious youth themselves were but dimly aware of the class motivations of the police and the economic system with which they were locked in battle. Given that over the preceding years the ‘left’ had gradually disintegrated into an impotent, disorganised, liberal mess (primarily owing to the actions of the enemy within its own ranks – that is, the Labour party), it was no surprise that this spontaneous uprising died a rather quick death.

And yet, despite its primitive organisation, consciousness and non-existent leadership, the raw power of the rising showed the revolutionary potential of the working class. In the face of such mass, widespread revolt, the British state was shown to be weak and fearful. If only the British working class possessed the level of class-consciousness and organisation of Bolsheviks (or any other successful revolutionary workers’ movement throughout history for that matter), the 2011 youth uprising might have led to something a lot bigger.

That is why our party’s line was consistently: “Defend the youth; inject spontaneity with consciousness!” History shows us that workers, when properly organised and enlightened by socialist theory, have the world to win.

As Britain, along with most if its imperialist counterparts, demonstrates its inability to solve the contradictions inherent in its capitalist economic system, it is the workers who will continue to bear the brunt of every crisis.
This is despite the vast fortunes of a handful of billionaires, who sit on their mountains of cash, or who may even unwisely be flaunting it by taking day trips into space.

Exacerbated (but not caused) by the Covid-19 pandemic, the ongoing economic crisis continues to lead to rising unemployment, job insecurity and poverty wages across the country. One in 20 British workers can’t find a job. One in nine work in ‘insecure jobs’ on zero-hour contracts or for agencies. One in five live in a state of poverty. Those in work are seeing their real wages fall year on year. The so-called ‘middle class’ (ie, privileged workers) is gradually disappearing, pushed economically into the ranks of the lower sections of the working class, while fewer people at the very top of society accumulate more and more wealth.

In response to the growing resentment at our capitalist society’s many ills, the state has opted to introduce draconian anti-protest laws (the Police, Crime, Sentencing and Courts Bill), and laws that, incredibly, openly admit and permit its undercover agents to murder, torture and rape (the Covert Human Intelligence Sources (Criminal Conduct) Bill), and to expand the police’s already racist and oppressive stop and search powers (proposed relaxation of Section 60 of the Criminal Justice and Public Order Act 1994).

With all these factors combining and deepening, it is only a matter of time until another outburst of working-class anger erupts onto Britain’s streets. It is our movement’s duty to continue building itself so that it can be in a position to offer our fellow workers the proper leadership they so desperately need in the coming years.

We must continue to inject class-consciousness into the British working class, to counter the anti-materialism and divisiveness of identity politics on the left and of the various nationalisms on the right.

The 2011 youth uprisings exposed the primary weakness of capitalism: that we (workers) are many and they (capitalists) are few. When united and determined, the workers are unstoppable.