Remembering the legacy of Polly Mann, founder of WAMM 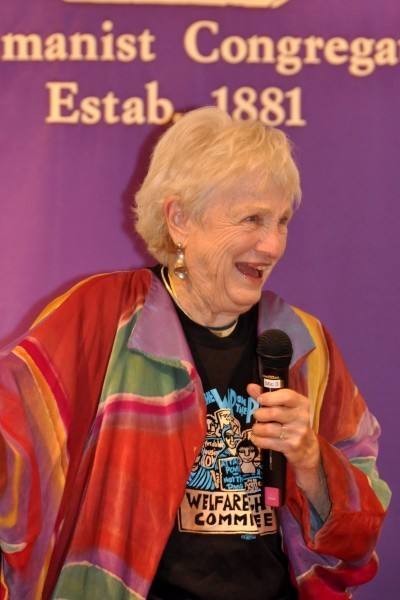 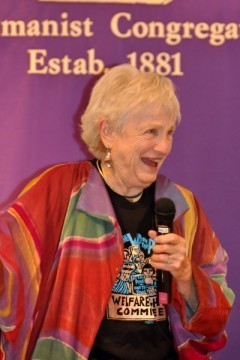 Minneapolis, MN – Polly Mann, a leading force and giant in the Twin Cities anti-war movement, died on January 12, 2023 at the age of 103 in San Francisco, California where she had lived with her daughter Connie for a little over a year.

In 1981 she called her friend Marianne Hamilton, who in 2015 recalled, “The smartest thing anyone ever thought of and carried through with was a new name for war: military madness. Men who were against war had to flee the country to avoid arrest, so women protested in great numbers. Dear Polly gave us a name to live up to – Women Against Military Madness: WAMM.”

Hamilton and Mann knew that polls showed most women were anti-war but they needed an organization to challenge the current government’s spending priorities, from military spending to human services. They were also concerned about the ongoing threat of nuclear warfare. They wanted a place for women to become leaders who would demand a peaceful and just society.

Mann always thought big, made things happen and remained involved. Until just six months before she died, she was still sending ideas and suggestions to the WAMM newsletter editor.

Mann began her lifelong commitment to peace and justice during World War II. As a secretary with the U.S. Army, she witnessed soldiers bayonetting straw effigies of enemy soldiers yelling “Kill, kill, kill!” and she instantly and from then on knew she opposed war.

Her fierce and relentless activism to all U.S. wars, interventions, and occupations began with the Vietnam War. She was a field organizer in the Gene McCarthy campaign, was present on the streets during the police assault on protesters during the Democratic National Convention in Chicago in 1968 and attended the Paris Peace talks in 1971 between the north Vietnamese and the U.S. with The Citizen Committee to End the War in Vietnam.

Mann was the first volunteer staff person in the WAMM office. She understood the importance of an office and staff to an organization and as a result she saw WAMM celebrate 40 years as a persistent anti-war presence opposing U.S. foreign policy. At times these were unpopular positions such as WAMM’s early decision to support Palestinians in their struggle for liberation, opposition to the U.S./NATO dismemberment of Yugoslavia and the U.S. involvement in the unsuccessful but destructive attempt at regime change in Syria.

Mann was very well informed, followed events closely and had a sharp and correct analysis and understanding of the depth and breadth of U.S. imperialism. She understood that capitalism was the root of U.S. wars at home and abroad. Her response to the injustices, oppression and violence perpetrated on both individuals as well as countries in the crosshairs of U.S. militarism was swift and strong which led her to immediate action.

She gave and organized support to countless people. Sara Olson, a current WAMM board member, recalls, “Once, while incarcerated, I requested what is called an ‘Olson Review.’ My so-called ‘counselor,’ a former Los Angeles County sheriff, a former member of a corrupt bunch if there ever was one, had to wait while I read my entire C file [criminal file]. I recall a letter Polly’s husband wrote to the California attorney general, telling him he should see to it that the judge on my case in Los Angeles be disbarred and why he, Walter, thought so. Next, there was Polly’s letter. As my counselor twisted and turned with frustration in his seat, I read her beautiful, well-turned phrases of support, tears streaming down my cheeks. While there are rarely good days in prison, for me, Polly’s letter made it one of the best.”

Kim DeFranco, WAMM member and former organizer with the Welfare Rights Committee, said, “Polly Mann was a fierce supporter of the Welfare Rights Committee. Throughout her lifetime and when fighting for economic and social justice, she knew the importance of women having a better economic status in society. She knew women are the economic and social backbone and needed to be better supported by the government and society.” Mann made every effort to promote the Welfare Rights Committee while in WAMM, either by writing articles, joining the group at rallies, demonstrations and legislative committee hearings. When she could, she would encourage the Minnesota legislature to pass important bills that would improve the lives of poor and working families and women and their children. Polly Mann will be missed but her legacy will carry on for another century.”

One of WAMM and Mann’s first actions was to organize buses to New York state for the 1983 Seneca Women’s Encampment for Peace and Justice, to stop the scheduled deployment of cruise and Pershing II missiles from the Seneca Army Base to Europe.

Mann went on delegations to many countries including Cuba, Libya and the Philippines to see and hear firsthand the effects of U.S. foreign policy. She ran a spirited campaign for the Senate in 1988 with the slogan “Speak Truth to Power.” She helped initiate an ongoing weekly vigil in Saint Paul, Minnesota for justice in Palestine during the first Intifada in 1988. She joined the picket line at the Hormel strike in Austin, Minnesota and, as Susan Giesen recounts, “Guardsmen were blocking the street. She marched right up to the line, approached each guardsman, touched him gently on the shoulder and said, ‘I know you don’t want to be sent to Central America. I will do all I can to not let them send you there.’”

She was an excellent and prolific writer and not only wrote columns for the WAMM newsletter, Southside Pride and the Women’s Press for years but also plays including, Victoria Reincarnated, which was about Victoria Woodhull and her candidacy – even before women could vote – for the office of U.S. president.

She was a popular speaker at innumerable programs and rallies including at the Minnesota State Capitol for the March on the RNC in 2008.

Mann was a beloved, respected and dynamic leader. Erica Bouza said on the occasion of her 90th birthday, “Greatness is rare. Not many of us have encountered it; the courage to stand up for what you believe and the skill to lead and persuade others to pursue the dreams of social, racial, economic and gender justice are isolated virtues, given to the very few. She is gutsy, scholarly, practical and effective, a devoted friend and an inspiration to those who dream of freedom, equality and justice.”

MANN OVERBOARD – Review of Michael Mann’s ‘The New Climate War: The Fight to Take Back Our Planet’

Remembering Richard Lachmann: A Political Sociologist with a Message for the Left

‘He never gave up the fight’ – remembering Alain Krivine