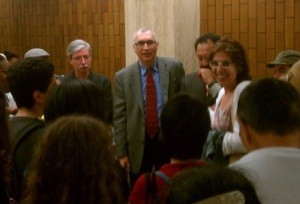 Carlos Montes trial moved to June 20, due to new developments

Statement from the LA Committee to Stop FBI Repression

Carlos Montes and supporters at court

Carlos Montes and supporters at court

Los Angeles, CA – Over 100 supporters rallied in front of the Los Angeles Superior Court today, May 15, to demand, “Drop the charges against Carlos Montes.” The supporters included MECHA students, union members, teachers, vendors and community members as well as activists from the anti-war movement.

“With your help we will win this case,” Montes told the crowd. “The repression against me is an attack on all of our movements. Thank you all for your solidarity! Together we will win!”

Following this strong showing of solidarity, supporters then moved in to the packed courtroom. Montes was set for trial. Due to a new development in the case, the trial was moved to Wednesday, June 20, 2012. The new development deals with obtaining information needed to clarify the legal record. The defense lawyer, Montes, and the district attorney agreed to the June 20 date, to give enough time to investigate this information that would help defeat this attack against Montes and our movement.

The struggle continues, we will continue to demand “drop the charges” and await the new findings that will clear the charges, if not we go to trial on June 20.

Carlos Montes is facing multiple felony charges because the FBI claims he is a felon in violation of firearm codes. The FBI claim stems from a 1969 student strike for Black, Chicano and Women’s studies at East L.A. College, where police beat and arrested demonstrators. Montes was arrested on his way home from the protest, accused of assaulting a sheriff’s deputy (with an empty soda can). This charge was sentenced as a misdemeanor according to a recently uncovered court document. District Attorney Steve Cooley, under the guidance of the FBI, is basing his case on this 42-year-old misdemeanor, disguising it as a bogus felony. Without a past felony, all of the charges Montes is facing, relating to his legally purchased firearms, would be dismissed. Both sides agree that no prison time whatsoever was served in the 1969 incident. The legal process is being driven by something other than the facts of the case. It is political repression.

“In the weeks ahead we need to keep putting pressure on the District Attorney to drop the charges,” states Mick Kelly of the Committee to Stop FBI Repression. “The prosecution of Carlos Montes is part of a broader attack by the FBI and local police on anti-war and international solidarity activists. We need to do everything in our power to push back.”