Report on the refuges on the Polish Belarusian border 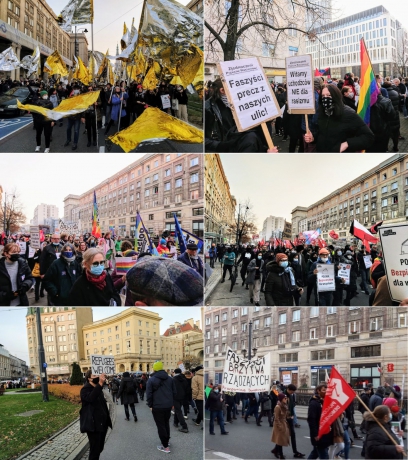 Short report on the refuges on the Polish Belarusian border and yesterday’s fascist organised, and state supported, march in Warsaw.

The horrific treatment of  refugees on the borders of Belarus with Latvia, Lithuania and Poland continues. Belarusian president Alexander Lukashenko is pushing refugees over the borders and they are being forced back. The biggest number of refugees is on the Polish border with Belarus.

Polish soldiers, border guards and police are brutally enforcing the “push backs”. Their numbers have escalated – there are now 15,000 Polish troops on the border.

According to official figures eight people are known to have died in the forests and swamps of the border areas, but who knows how many more bodies there may be out there? We have just learnt that  a 14-year old boy from Iraq has been found frozen to death. The refugees have to sleep in the open in freezing temperatures, some of them have been enduring this for weeks.

Poland’s right wing racist Law and Justice (PiS) government refuses to call the people on the border refugees –  insisting  on calling them migrants so that it can deny them their rights. And it has introduced a state of emergency in a 3-kilometre wide zone on the border to prevent anyone witnessing the brutal treatment if refugees.

PiS accuses Lukashenko of using the refugees as weapons in a “hybrid” war. But there is one simple way to “deweaponise” the refugees. Let them into Poland!

Many antiracists believe we can rely on the European Union to help defend the refugees. But the EU (and NATO) leaders have backed Poland’s brutal border policy. They blame only Lukashenko. And we mustn’t forget that EU policy is responsible for at least 22,842 deaths in the Mediterranean from 2014 to October 26 this year (according to International Organisation for Migration data).

PiS has strengthened its alliance with fascists. The annual fascist organised march on Independence Day yesterday (November 11) was initially banned by Warsaw’s mayor. The ban was upheld by the courts but overturned when the government declared the march was now an official state event. PiS leaders wanted at all costs to avoid a defeat for the extreme right. A minister said: “Today, in the face of the situation on the Polish border, demonstrating our patriotism has taken on special significance”. And the government has given the fascist organisers of the march around one million dollars in aid.

Yesterday solders took part in the march and military police acted as stewards – accompanied by fascist banners from the Polish ONR and the Italian Forza Nuova at the front of the march.

The march was neither the biggest nor the smallest in recent years – it attracted some tens of thousands of people. It shows what a threat the fascists pose – that they must not be underestimated and must be opposed wherever they appear.

But it is also important to stress that throughout the year protests in which the vast majority of people are opposed to the government’s links to the extreme right predominate – over LGBT+ and women’s rights, climate change and in solidarity with refugees. Only last Saturday (November 6) 25, 000 people marched in Warsaw after a woman died in hospital because doctors were afraid to save her life before the foetus she was carrying died. Demonstrations also took place in over 80 towns and cities, all under the slogan: “Not one woman more!”.

In October thousands marched in Warsaw and Krakow in support of refugees – the biggest demonstrations of solidarity with the people being brutalised on the border we have yet seen. And many are involved with sending material aid to the border area and providing legal support.

And that resistance continued with yesterday’s anti-fascist demonstration in Warsaw which attracted several thousand people.

Europe’s shame: The horrific treatment of refugees on the Poland-Belarus border