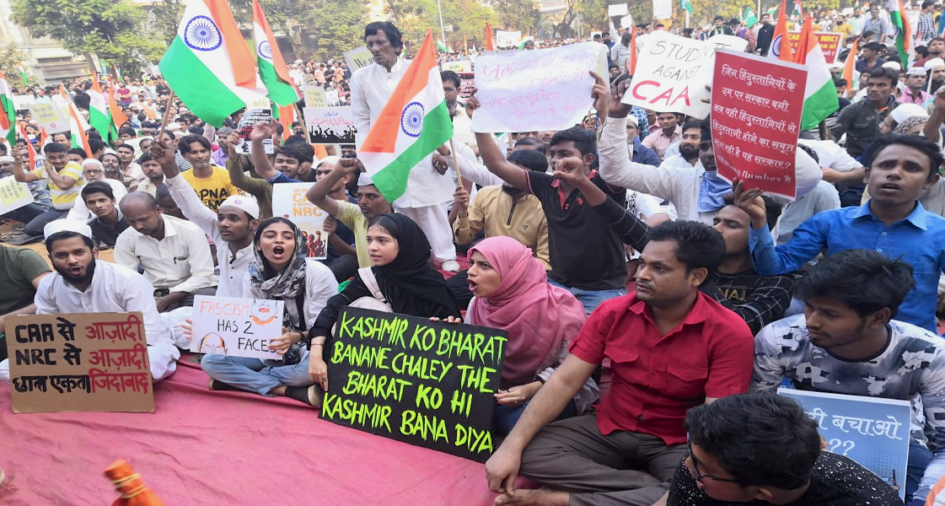 Protests in Mumbai against the National Register of Citizens and Citizenship Amendment Act (credit: Vishal Yashoda)

In India, as in other parts of the world, voter suppression has always targeted oppressed communities and minorities. Independent India’s constitution included universal adult suffrage from its birth. Structurally, however, there were limits on suffrage.

The incomplete and half-hearted programme of land reforms meant that landlordism continued to wield great political power on caste lines. Landlords from dominant castes owned large tracts of land; tenants from intermediate castes farmed the land; and most agricultural labour was performed by landless men and women from the oppressed castes, including the extremely oppressed Dalits. In elections, powerful landlords controlled and delivered votes to political parties they backed. Labourers held fast in a feudal relationship with landlords would not go out to vote; voting booths would be ‘captured’ by the men of the dominant caste and party, and votes ‘cast’ en masse for the party of choice.

There have, however, been organised political assertions by the landless poor in the decades since independence. One prominent instance was that led by the Communist Party of India (Marxist-Leninist) Liberation, or CPI(ML), in the eastern Indian state of Bihar in the 1980s.

From voter rights to victory

Born in 1969 in the wake of the 1967 peasant uprising in Naxalbari, West Bengal, the CPI(ML) had boycotted elections in the 1970s and remained underground. But as its work in Bihar among the rural landless poor grew, the party recognised that this class aspired to exercise its franchise. The right to vote was a political right, seen on a par with economic rights (including to own one’s homestead and cultivable land promised by land reforms) and social dignity (an end to feudal practices that humiliated people of oppressed castes).

The feudal forces saw such assertions of voting rights as a challenge to their political hegemony and sense of feudal ‘honour’ and power. Dipankar Bhattacharya, general secretary of the CPI(ML), observed in 2012: ‘If we look at the history of the CPI(ML) movement [in Bihar]… the right to vote has been one of the most keenly contested issues… In the 1989 Lok Sabha [national parliament] elections, when large numbers of Dalits for the first time succeeded in exercising their franchise and electing Rameshwar Prasad as the first Naxalite [revolutionary communist] Member of Parliament… [22 people] had to pay with their lives the price for the right to vote.’

A similar process occurred in 1995, when the election of two revolutionary communist MLAs (members of the legislative assembly) in Bihar was a key trigger for the formation of the feudal private army, the Ranveer Sena. In 1996, this army carried out the Bathani Tola massacre: the killing of a village full of women and children.

While the Ranveer Sena itself has declined considerably, feudal political violence aimed at deterring Dalits from voting continues. But the CPI(ML)’s successful struggles to assert the voting rights of Dalits and landless labourers helped secure it a lasting foundation in Bihar. In the 2020 Bihar Assembly elections, the party won 12 out of the 19 seats it contested as part of an anti-fascist coalition.

Today, violence at polling booths aimed at deterring Dalits, Adivasis and other minorities from voting is often carried out by the state’s own forces, not only by feudal outfits. With the rise of Hindu-supremacist politics since the late 1980s, India’s police and paramilitary forces have become increasingly Islamophobic.

The Hindu-supremacist Bharatiya Janata Party (BJP) has been in power at a national level since 2014, exercising unprecedented control over these forces as well as the election commission. This has resulted in occurrences such as the shooting at a polling station in Sitalkuchi, West Bengal, during the state’s assembly elections in April 2021 – an incident widely believed to be intended to intimidate and deter Muslim voters.

Beyond violence and intimidation, the process of preparing electoral rolls is opaque, arbitrary and difficult for the poor to challenge. As a result, millions of people are systematically excluded. One segment among these that is seldom acknowledged is the massive migrant workforce.

The 2020 lockdown revealed the vast size of this exploited population to the world, when they were forced to walk hundreds of miles on foot from cities to their villages. The vast majority of such workers get excluded from voting either because they are left off voter rolls, or because they are registered as voters in their villages but are unable to take leave from work and find the money to travel home to vote. Further, in the 2019 elections, two leading psephologists calculated that there were some 21 million missing women voters.

In the state of Assam, fears of ‘Bangladeshis’ entering the country and becoming voters have been harnessed politically, with disturbing consequences. One is the system of voters being marked as ‘doubtful’ (D-voters), requiring them to prove that they are indeed Indian citizens. In the meantime, such voters are often held for long periods in detention camps. The National Register of Citizens (NRC) conducted in Assam was intended to settle this issue once and for all but it has only exacerbated the problem. More than 1.9 million applicants were left out of the final NRC in 2019. The vast majority of these are poor and marginalised Indian citizens without the documentation to prove citizenship.

The BJP government, headed by Narendra Modi, intends to conduct the NRC exercise across India. In 2019, it passed the Citizenship Amendment Act (CAA) with the explicit intention of disenfranchising Muslims. The CAA allows the non-Muslims potentially excluded from the NRC a way back to citizenship by claiming to be ‘refugees’ from neighbouring countries. Home minister Amit Shah has used the dehumanising term ‘termites’ for Muslims, whom he claims are ‘infiltrators’ masquerading as voters. The NRC and CAA, if implemented, would be among the most sinister voter suppression/exclusion exercises in the world today.

Kavita Krishnan is a communist feminist activist and a Politburo member of the Communist Party of India (Marxist-Leninist).

The Limits of “Lived Experience”