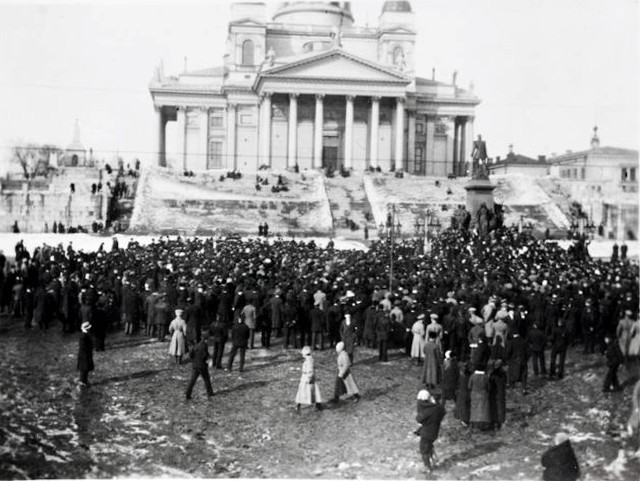 The Russian Revolution was far less Russian than has often been assumed. By examining the imperial borderlands’ numerous socialist parties, my new book Revolutionary Social Democracy: Working-Class Politics Across the Russian Empire (1882-1917) (Brill, 2021) challenges long-held assumptions about revolutionary Russia and the dynamics of political struggle in autocratic and parliamentary conditions.

Beyond rediscovering the lost history of the Tsarist empire’s non-Russian Marxists, my study addresses the following puzzle: Why did revolutionary processes and outcomes diverge so dramatically across time (between 1905 and 1917) and space (between the different regions of imperial Russia)? I point to two significant causal mechanisms driving these divergences: regime type and party articulation.

Exceptional political freedoms in Finland — the one region of the Russian Empire with a democratically elected representative body and civil liberties — consistently set its workers’ movement down a more parliamentary, and more organized, path than the rest of Russia, where autocratic conditions pushed the workers’ movement towards a strike-based, insurrectionary focus.

But differences in political regimes cannot explain why radical socialism prevailed in almost all of the empire’s regions in the 1905 revolution(s), but not in the 1917–18 revolution(s). Reflecting the political strategy of the dominant socialist party in their given region, anti-capitalist governments were established in Finland, central Russia, Latvia, Estonia, Azerbaijan, and Lithuania in 1917–18, while cross-class governments were established in Ukraine, Poland, Georgia, and Armenia (and supported by Jews).

Making sense of these outcomes, I argue, requires accounting for the inter-party competition of organized socialists and their evolving strategic orientations, especially following the demoralizing defeat of the 1905 revolution. Though they operated in circumstances not of their own choosing, workers’ parties made their own history, especially in moments of revolutionary upheaval.

Bringing in the Borderlands

Most inhabitants of imperial Russia were from dominated national groups – Ukrainians, Poles, Finns, Latvians, Jews, Muslims, and Georgians, among others. The same was true for most Marxists within the empire. But since these non-Russian socialist parties have been ignored or marginalized, the hegemonic accounts of 1905 and 1917 — as well as the literature on comparative revolutions — have failed to either note or explain the divergent revolutionary processes and outcomes across imperial Russia.

In part this myopic focus reflects the longstanding Russocentric tendencies of academics and activists alike. It also has linguistic roots: the primary sources of the non-Russian socialists were mostly written in not-widely-read Eastern European languages. On the basis of my original research in Finnish, Latvian, Polish, Ukrainian, Russian, German, and French sources, Revolutionary Social Democracy is the first monograph to comparatively analyze the borderland Marxists from an empire-wide perspective.

The marginalization of non-Russian radicals in the academic and activist literature does not accurately reflect their actual weight in imperial Russia, or their analytical importance for understanding the evolution of working-class struggle. Revolutionary movements had remained stronger in the borderlands than in the imperial center for much of Tsarist rule. In an empire where non-Russians comprised 58 per cent of the population, borderland parties represented over 75 per cent of organized Marxists. And up through 1917, the massive Finnish Social Democracy remained the single largest socialist party per capita in the whole world.

Why were anti-capitalist governments established in certain regions but not others in 1917–18? To help answer this puzzle requires examining the political evolution and competition of socialist parties. Up through Russia’s first revolution, class struggle radicalism predominated everywhere except in Finland and among Armenian communities. Indeed, the borderlands had generally been even more militant than St. Petersburg in the first Russian Revolution. But in the wake of 1905’s disorienting rout, moderate socialists eventually became hegemonic in Ukraine, Georgia, Poland, and among Jews. In Finland, however, the opposite pattern prevailed, with radicals displacing moderates after 1905.

As outlined in Table 1, political outcomes in 1917–18 corresponded entirely to whether radicals or moderates predominated in the socialist movement. Where radicals were hegemonic, they set up anti-capitalist governments. Where moderates predominated, they generally established coalition governments with bourgeois parties and often proceeded to invite foreign militaries to intervene in 1918. Ukraine and Poland – the two largest and most geo-politically strategic borderland regions – were particularly decisive, and surprising, defeats for the spread of revolution westward.

Making sense of the distinct political outcomes in 1905 and 1917–18 poses a challenge to the vast comparative scholarship on revolution, which has overlooked Russia’s borderlands and minimized the causal impact of political parties. For instance, by treating Russia as a homogenous nation state, Theda Skocpol’s sociological classic States and Social Revolutions does not acknowledge, let alone explain, the divergent outcomes of socialist politics and revolutionary struggle for the different nationalities of the Russian Empire in 1905 and 1917–18. A broader geographic scope would require tempering her ‘state-centric’ structural account of revolution with an appreciation of social movement agency, particularly as concretized through competing party-building projects and the strategic decisions of socialist leaders.

Revolutionary Social Democracy demonstrates that examining the strategic evolution of socialist parties and their competition with each other is necessary, if not sufficient, for explaining why moderates after 1905 won dominance in Poland, Ukraine, Georgia, and “the Jewish street” but lost it in Finland. Imperial Russia, with its diverse regions, organizations, and outcomes, is a historically unique laboratory for a comparative analysis of working-class politics, illustrating how workers’ movements were shaped by parties as well as governmental regimes.

The exceptional case of Finland – the only region of Russia where the Tsar allowed political freedom, a democratically elected parliament, and a legal labor movement – provides an especially rich comparison to reveal the distinct dynamics of socialist politics in authoritarian and parliamentary polities. Conditions in Finland pushed the workers’ movement down a less insurgent, and more organized, path than in the rest of the empire. Though the party had initially been one of the most moderate in Europe, Finnish socialists from 1906 onwards implemented the revolutionary social democratic strategy famously articulated by Marxist theoretician Karl Kautsky in Germany. This patient, parliamentary-oriented approach was a spectacular success in Finland, where the Social Democratic Party won an electoral majority in 1916 and proceeded to leverage that democratic mandate to seize power in early 1918.

Finland’s long-overlooked experience illustrates that workers and socialists in parliamentary contexts will tend to focus on what Walter Korpi labels “the democratic class struggle” — building class power through electoral politics as well as union organizing — and it lends credence to the democratic socialist case that anti-capitalist rupture under parliamentary conditions likely requires the prior election of a workers’ party to the state’s democratic institutions.

In the other regions of imperial Russia, absolutist conditions pushed workers’ movements towards a strike-based, insurrectionary focus. Hitherto underground radical socialist movements across the Russian Empire seized power in 1917–18, confirming the case of works positing that successful working-class insurrections generally only arise under conditions of authoritarianism. Analyzing the entirety of the Russian Empire makes it clear that the presence of an autocratic regime was the single most important factor differentiating the trajectory of Russia’s underground socialists from their counterparts across Europe — which is one key reason for the failure of post-1917 Leninist attempts to export an insurrectionary strategy and soviet power to political democracies abroad.

But autocratic conditions were not sufficient on their own to ensure the dominance of radical socialism. Demoralized by the 1905 defeat, leaders of a wide range of socialist currents – including the Mensheviks, Polish socialists, Georgia’s social democrats, the Jewish Bund, and Ukrainian social democrats – broke from the prevailing radical consensus and for the first time began to search for a bloc with the bourgeoisie. With now-moderate socialists dropping their previous advocacy of working-class hegemony, they increasingly built ties with liberals and nationalists, setting the stage for the cross-class coalition governments that arose in 1917–18.

As the experience of the Tsarist Empire helps demonstrate, the crystallization of workers into a politically united and societally hegemonic class depends to a significant degree on the existence of parties pushing in that direction. One of the key dynamics illustrated in my book is what recent sociological scholarship has termed “political articulation” — parties do not just reflect cleavages, they help structure them by articulating interests. This is a point especially worth underscoring at a moment when so few people believe that organized workers can again become the central agent for winning progressive change. But without parties today pushing to cohere workers as workers, it is not surprising that such a political force has not emerged automatically. While it is true that many different social relations and identities can spur political contention, it does not follow that all forms of collective mobilization are equally efficacious or that popular struggle is entirely contingent on discourse.

There is one final reason why it is important to analyze the rise and unexpected fall of working-class politics in Russia’s borderlands: it can help explain the defeat of the post-1917 international revolutionary wave, whose containment paved the way for the consolidation of bourgeois rule in the West and the subsequent emergence of Stalinist authoritarianism in Russia.

From at least 1905 onwards, Kautsky, Leon Trotsky, V.I. Lenin, and allied non-Russian revolutionary social democrats had envisioned that a successful revolution in central Russia would spread to the German and Austrian empires via the Tsarist Empire’s borderlands. It appeared that this internationalist dream was set to become a reality in 1918, as the military catastrophe of World War One and the inspiring example of the October Revolution sparked the most serious challenge ever mounted against global capitalism.

Bolsheviks and Western powers alike understood that Russia’s periphery was a key battleground for the expansion or containment of socialist rule. Between central Russia and the rest of the world stood the borderlands: if the revolution triumphed in the empire’s periphery, it might proceed to advance across Europe and Asia. But to the surprise of the era’s radicals, key imperial borderland regions such as Poland and Ukraine ended up constituting more of a barrier than a bridge to world revolution after 1917. One century later, it is well past time to analyze the reasons for this unexpected outcome —and to explore the broader lessons of imperial Russia’s socialist movements for those interested in radical social transformation today.

[1] This table, and the monograph, covers the 11 national groups and regions in the Tsarist Empire that had at least one Marxist party of their own.

[2] This refers to the dominant socialist approach on the eve of the revolution (e.g. late 1916) and at its climax (e.g. late 1917), with the exception of Ukraine, where radicals generally predominated before, but not during, 1917. Note: radicals in regions like central Russia briefly lost hegemony early in 1917, but regained it quickly. ‘Radical’ refers to socialists committed to class struggle and a revolutionary break with capitalism. ‘Moderate’ socialists were those strategically or practically oriented to a bloc between working people and the upper class, an orientation that usually meant opposing the establishment of an anti-capitalist government.

[3] Cross-class here refers to administrations that included bourgeois parties or that subordinated themselves to foreign capitalist powers. Listed outcomes are for the governments established in the main urban centers (e.g. Baku in Azerbaijan). For 1917–18, the governmental outcomes are from February 1917 up through the end of 1918. Note that cross-class regimes generally preceded anti-capitalist conquests of power in 1917 and that there were numerous localized power seizures by parties across the political spectrum.

Eric Blanc is a Ph.D. candidate in the sociology department at New York University. In addition to being the author of Revolutionary Social Democracy, he is also the author of Red State Revolt: The Teachers’ Strike Wave and Working-Class Politics (New York: Verso, 2019).

This article is based on Eric Blanc, Revolutionary Social Democracy: Working-Class Politics Across the Russian Empire (1882-1917) (Leiden: Brill, 2021).

Image: Demonstration at Helsinki Senate Square. Image by National Board of Antiquities on the Finna service hosted by the Finnish Ministry of Education and Culture, Public domain, via Wikimedia Commons