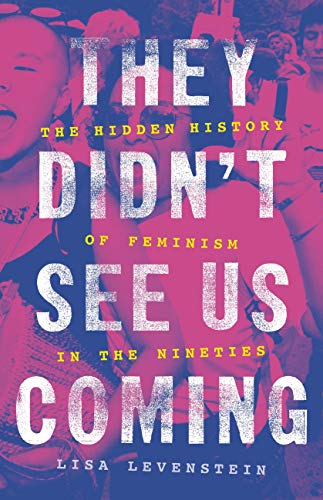 They Didn’t See Us Coming: The Hidden History of Feminism in the Nineties by Lisa Levenstein is an important correction to mainstream media claims that feminism should be defined as a U.S. movement, mostly of white, middle-class women, that diminished in the 1990s.

Leaders of large, U.S. feminist organizations like the Ms. Foundation had their own misperceptions, including that the movement might fall apart if it splintered into too many groups outside of their centralized control. They sent feminists from other activist groups across the U.S. to the 1995 UN Fourth World Conference on Women in Beijing, China, to present a united front and strengthen their foundation’s national network. Instead of attending classes about the UN as planned, the attendees preferred workshops by feminists from other countries and learning about their issues.

As with similar conferences during the 1990s, the U.S. women, many of whom were women of color, learned from “the exposure to entirely new ways of thinking—frameworks and ideas shared by women from Latin America, Asia, and Africa.” Loretta Ross, leader of SisterSong, stated, “The women globally offered us lessons and strategies that we simply did not know in the U.S. We had everything to gain from becoming a global activist as long as we understood that we had far less to teach than to learn.”

Levenstein says they “outlined the effects on women of the spread of global capitalism,” and U.S. women discovered that “the underlying logic of the policies they were pushing back against at home echoed what was happening in the Global South.” These involved the policies of neoliberalism and structural adjustment. As one activist said, “the U.S. was actually enacting welfare reform all over the world.”

Activists were also creative with activism. Women with disabilities from different countries united to attend each other’s panels and to infiltrate workshops on all other issues, explaining how disability is part of every feminist issue. Similarly, feminists promoted awareness in social justice organizations and in the UN that women’s liberation is part of every issue and how it’s necessary for a thriving society.

Levenstein discusses other resulting developments in feminist activism. Worldwide feminism flourished online after women taught each other how to use the internet. U.S. feminists joined the environmental justice movement and learned that women’s labor and healthcare struggles are part of the struggle against environmental racism. International feminists also taught those in the U.S. that they have a common struggle against patriarchy.

With an increase of people hired by activist organizations, feminists discussed how funding from governments, corporations, and philanthropists reshapes the mission of an organization from social justice to preserving capitalism. Women of color in domestic violence and rape activism led the way in this analysis.

Levenstein hopes many more histories are written of feminism to show the complexity of the movement. This book explores how the feminism of today took shape. It also shows the importance of feminism as a radical, worldwide struggle against patriarchy and capitalism and as a network of relationships.