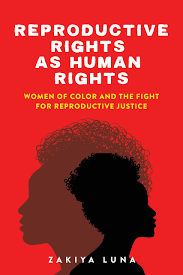 From the November-December 2021 issue of News & Letters

In Reproductive Rights as Human Rights: Women of Color and the Fight for Reproductive Justice, Zakiya Luna discusses how SisterSong, the reproductive justice organization, was based and operates on the concept of human rights. Founded in 1997 from a coalition of 16 organizations, it is led by women of color, focusing on their reproductive rights. These include the need for safe and legal abortion and contraception but many other rights as well.

A few are the right to and education about healthcare, freedom from violence and environmental toxins and the right of incarcerated women to not be shackled while giving birth. SisterSong coined the term “reproductive justice” to mean the right to have a child, to not have one, and to parent children in safe, healthy environments (see “Trust Black Women in Solidarity with Black Lives Matter”, N&L, March-April 2016).

RIGHTS AND THE OPPRESSIVE STATE

Reproductive justice combines the terms “reproductive rights” and “social justice.” SisterSong also uses the term “civil rights,” and Luna explains how “human rights” contains all of these. She states the UN was formed and developed the concept of human rights in response to the Holocaust. Hoping to prevent future atrocities by governments on people, both citizens and noncitizens, the UN stated all people have certain rights just by virtue of being human. These include the rights to thrive and express one’s full humanity, having it respected and celebrated.

SisterSong opposes what Luna calls the “restrictive domestication” of human rights by the U.S. government. The U.S. claims “exceptionalism” in being a country that recognizes human rights. It justifies economic exploitation and military intrusion into other countries in the name of liberating them from invaders or their own supposed backwardness by teaching them about human rights. At the same time, it justifies denial of human rights to its own citizens by claiming they already have them. While activists must call upon the state to change laws and policies, the state is also the oppressor.

SisterSong engages in “revolutionary domestication” of human rights, “demanding that the United States be held accountable to the same human rights standards that are recognized around the world.” It also points out that the U.S. has refused to sign international women’s rights treaties such as the Convention on the Elimination of All Forms of Discrimination Against Women because, unlike other countries, it objects to reproductive rights language. SisterSong also recognizes human rights as “a relational practice” among people. Part of its mission is to educate U.S. citizens about their own human rights, as they often are only aware of the concept as it relates to other countries. SisterSong’s human rights focus has brought more activist groups, such as the NAACP, into supporting reproductive rights by explaining how rights are interrelated.

OUR LIBERATIONS ARE BOUND UP TOGETHER

Reproductive justice includes discussion of how a denial of rights affects communities, countries and the world as well as individual women. An article by SisterSong states, “There is a dialectical relationship between what happens to women of color in other countries and what is visited upon women of color in the United States: all of our human rights are restricted by a white supremacist structure that de-prioritizes our needs while exploiting our bodies for the reproduction and maintenance of the economic system.”

Luna quotes Australian Aboriginal activist Lilla Watson, “If you have come to help me, you are wasting your time. But, if you have come because your liberation is bound up with mine, then let us work together.”

Luna discusses increasing globalization, not as the globalization of capital, but as the interaction of people. This book is a valuable beginning of a conversation about the role of the concept of human rights in activist organizations and in creating a more just and humane world.