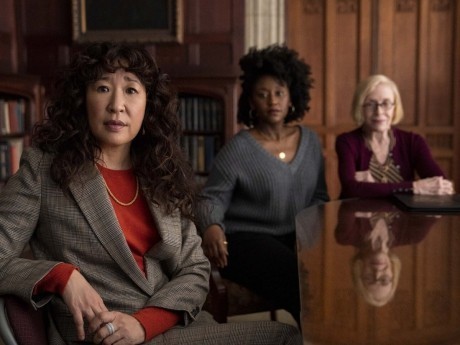 The Chair attempts to deal with how universities are dominantly perceived: as a marketplace with students as consumers, and the faculty as producers of knowledge. It is an imagination of an American Private Ivy League-ish university and it gets many things that resonate with people who studied Literature: the way English departments function in an American University as straddling the vestiges of the past (is anyone interested in Henry Melville anymore) and reading of our literary greats for their flaws (what about the women in lives of Melville?).

The exploitation embedded in the industrial complex of academia is also very clear in the tokenization of the role of the Chair itself – the Chair can solve and tackle every problem, or is supposed to, even when the first racialized woman is finally offered that position in the midst of a budgetary crisis that devalues the Humanities (played by Sandra Oh).

Sandra Oh’s character, Ji Yoon, is called on for almost everything: from fighting for a better office for one of her profs, to deciding the distinguished lecture. But someone like a contract instructor might be doing a lot of the teaching workload with less money in her bank account (where is the teaching happening, really, if the upper echelons are busy doing everything but teach?) but we don’t see this in the show. Although it is hinted that the university runs like a profit-making machine relying on the exploited labour of the people who do not teach but keep the university running.

For example, the Title IX complaints department keeps merging disparate offices run by a singular administration staff person who also happens to be an Asian woman— the university clearly, according to The Chair, has diversified in race/ethnicity but only by doubling down on the amount of work this diverse faculty and administrative staff are supposed to do. Thus, the Chair, in her new role, is suddenly answerable to problems she did not create. To add to departmental budget cuts and the university administration’s bureaucratic structure, she also has to clean up the mess of the man she loves.

Bill Dobson, a professor who teaches Death and Modernism, is dealing with his wife’s death and is going through a moment where his own narrative authority seems to be questioned – much like the literary style he teaches. In the debacle where he gives a Nazi salute in class lies the articulation of dissent on campus: in his mind, it is pedagogical, for students it is unacceptable. This brings to mind the debate over the use of the “N” word that has erupted in university classrooms recently.

But the show treats students as props of dissent. Their demands are unclear and even shown as so impossible that even the greatest writer on campus doesn’t pass the perfect apology test (perhaps a slight hark to the term cancel culture?) Students are seen signing petitions, vie for their racialized professors to get tenure, call out the Nazi-saluting Professor by recording his lecture only halfway through. Students of this university are sarcastic and mean with their professors whose credibility they are ready to question at the tip of the hat. There is no engagement of students on campus outside of saving the dying departments or outcrying the teaching of the walking dead on campus and their outmoded logic of thinking.

Given the current climate in the US and Canada where students are actively unionizing and asking for better working conditions and throwing up the university as an exploitative workplace, seeing students as contrarian idealists and not workers is what struck me as a choice to be thought about more. For The Chair, Students do not know how money works—all they can do is sign petitions, and indeed, this is why, according to the show, we should empathise with the academic 1% that is The Chair who is doing her best, and in the end, also thinks of students as people who cannot be fooled with a simple termination of the Professor and demotes herself.

This is where I want us to focus on the moments the Teaching Assistant, Lila, comes in. She is clearly facing the brunt of Bill’s entitled behaviour in the classroom and outside of it as a thesis supervisor–right from the beginning, we see her being the shield of her Professor’s self-aggrandizing and self-degrading behaviour. She is running around searching for her Professor who is more busy wallowing about death than caring about Modernism. When she comes to the Chair with how Dobson’s behaviour is impacting her research, she is told to not take this up with the media lest the department goes down—and if it does, so will she. Who will supervise her? What will happen to her funding? Instead, the gag order, as it is called in the show, is used as a device to make us feel bad for the Chair who has been decontextualized, just like Bill is, from her well-meaning intentions to save her department.

And yet, one is left thinking—what is the department without the TA who both studies and works? This might have been answered through the scene between Ji-Yoon and Lila wherein Ji-Yoon is trying to make amends, where Lila breaks down when she is being assigned a different supervisor in order to save her research. This was the most relatable moment for me as an academic worker myself: it is people like Lila who bear the dearest costs and have to settle for pennies and compensatory acts pushing them to pivot their research. In the end, in a classic Hollywood style happy-ish ending, Lila gets her “due” in a book contract –she is chosen over a rich, white student by Dobson and thus begins a slight gesture towards a redemption arc for Bill.

Radical and Marxist academics like Fred Moten and Joss Winn have illuminated for us that both student labour and faculty labour produce the knowledge commodity on campus–the labour process isn’t really as simplistic as The Chair makes it out to be. However, rather than lamenting what The Chair doesn’t do, we can work with what it does: the divide between students as idealists and faculty as workers.

The only student worker in the show, the TA Lila, arrives in important moments and yet is the most unimportant character–much like how student academic workers are treated in universities. I want us to think about the character of the TA as both the student and the worker, to understand that students on campus do not just dissent against dying departments because they love their professors, but because budget cuts and corporatisation of the campus affects them directly as workers as well.

This treatment of Lila as both important and insignificant is where I found The Chair’s understanding of the university at best: it is on the backs of those underpaid and under-valued thinkers that the university can call itself the bastion of knowledge and resistance.