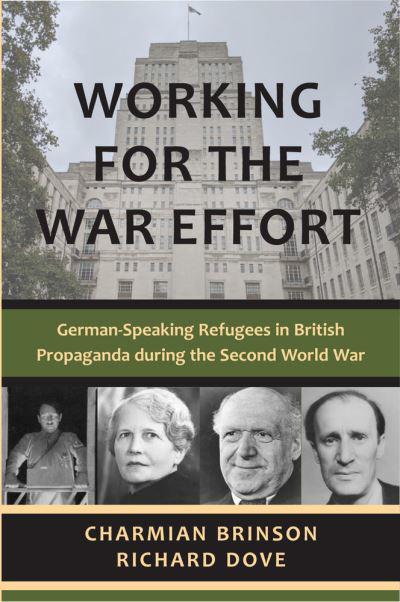 Merilyn Moos reviews a recent work on German-speaking refugees and their role in British wartime propaganda. Moos finds this an instructive area of history for modern socialists, but the narrow focus of this book prevents a sufficient investigation of the complexities of anti-fascism, communism, and the politics of German-speaking propaganda.

While there are several books about refugees who fled Nazism to Britain, Working for the War Effort by Brinson and Dove is the only one which focuses on how important German-speaking refugees were to British wartime propaganda. What it reveals is how far many German-speaking refugees, far from having some residual attachment to their country of birth, enthusiastically supported the British Government during the war.

As Working for the War Effort reveals, the refugees’ commitments were all the more noteworthy given the ‘hostile environment’ they inhabited. Although there are no definitive figures, approximately 80,000 German-speaking refugees arrived in Britain by September 1939 and a few thousands after that. The British public and a significant section of the British establishment viewed all Germans as having a collective responsibility for Nazism, a view associated with Sir Robert Vansittarist, a former Permanent Under-Secretary at the Foreign Office. ‘Vansittarism’ impacted on the left as well as the right of the British political spectrum, even drawing in some German-speaking refugees. In 1940, Churchill introduced the policy of mass internment of ‘enemy aliens’, some of whom, in particular communists, were sent on to the ‘Dominions’. Approximately 30,000 German-speaking refugees were interned, including, for a time, many of the main characters in this book. Working for the War Effort makes clear that this was not the welcoming environment that we are repeatedly told Britain offered the refugees.

A further issue Working for the War Effort highlights is the levels of anti-Semitism amongst the British ruling-class. A regular ‘concern’ in the corridors of the Foreign Office and the Ministry of Information, was their wish to avoid ‘Jewish-run’ organisations or ‘Jewish intellectualism’ being involved in propaganda and the war effort. Working for the War Effort, in highlighting the hostility which the many Jewish, communist, and other exiled German refugees faced, cuts against the rosy image of Britain’s wartime ruling class as defenders of freedom.

Working for the War Effort includes detailed and well-researched chapters on the role of varying little-known institutions in propaganda. These include the German language newspaper, die Zeitung, as well as the German service of the BBC and the contribution of refugee artists. The differing purposes of such propaganda was to appeal to two audiences, at times in tension: Germans in Germany and elsewhere, and German-speaking refugees in Britain, including the roughly 400,000 POWs, during and after the end of the war.

The chapter on Die Zeitung, a paper set up to present a pro-British stand to German exiles in Britain following an appeal by two German journalists and backed by the Ministry of Information and the Foreign Office, reveals the Government not wanting the paper to end up in the hands of communists, nor for that matter, too many Jewish journalists. Although Die Zeitung’s anti-communist stand appealed to refugees on the left who had fallen out with the German Communist Party (KPD), as the book demonstrates, many of the exiles, especially on the left, were critical of Die Zeitung for attempting to minimise communists ‘contribution to anti-Nazi resistance.

As the book reveals, the British Security Services did their best to ensure that German-speaking communists were not recruited to work in propaganda. The chapter which includes a section of the German League of Culture (FGLC), founded by refugee Germans in late 1938/early 1939, and probably the best organised of the refugee organisations, shows how it came to be dominated by refugee communists. They made repeated offers to the Ministry of Information and the Home Office to provide hundreds of writers, journalists, scientists, musicians, and artists (including John Heartfield) to produce anti-Nazi propaganda. This was in effect turned down, although feuding within the FGLC did not help.

A further chapter on Government political warfare shows how indispensable the German refugee speakers were to ‘black’ propaganda ventures.  The Political Warfare Executive, a still largely concealed section of the Foreign Office, was responsible for such ‘black’ propaganda to enemy countries, whose purpose included ‘stimulating active rather than passive defeatism among German workers’. A ‘German workers station’ was established, largely run by refugees in Britain from Neu Beginnen, a left breakaway from the Social Democratic Party of Germany (SPD), such as Fritz Eberhard, who could broadcast in ‘proper’ German. This station claimed to be broadcasting from inside occupied countries, appealing to German workers, whilst hiding their relationship with the British State.

The Special Operation Executive (SOE) had been set up in July 1940, initiated by Churchill and placed under the control of Labour MP Hugh Dalton, who was part of the National Government. Dalton split SOE into propaganda and sabotage sections. Consequently, much of its work falls outside the remit of Working for the War Effort, but its propaganda does feature, including via the Political Warfare Executive. For example, SOE was involved in a plan by Wilhelm Weinberg to send a large number of anonymous letters to German officers posted from within Germany, purporting to come from a German with a military background to undermine the morale of the German officers. What happened to this initiative is not clear.

SOE’s sabotage role was far more pronounced. Its support, often temporary, for partisans fighting against Nazism in occupied Europe facilitated left-wing Germans, who might not have wanted to support the operations of the ‘bourgeois’ state, working for them. Though Working for the War Effort does not go into detail about members of groups to the left of the SPD whose members were willing to work for the National Government, it does discuss how, unusually, the leadership of SOE, mainly establishment figures, were willing, or even enthusiastic, to draw on German-speakers on the ‘left’ in the exile community, though not from the Communist/KPD network.

Working for the War Effort has much to recommend it to socialists even though its narrow historical focus is inevitably limiting. As opposed to the crude thesis of Daniel Goldhagen, a modern-day successor to Vansittarisam, that all Germans were to some extent collaborators, this book highlights how committed many ‘ordinary’ Germans were to do their bit to defeat fascism. What the book does not explain is the particular motivations and difficulties leftists faced when opting for an alliance with the British State, including in propaganda, as the only way of defeating Nazism.

It is worth reminding ourselves how politically unreliable the British Government were in their position on fascism. The British State was not a reliable ally against Nazism, an issue Working for the War Effort could have usefully brought out further. They had failed to support the Spanish Republican Government or, at a minimum, to condemn the Italian invasion of Abyssinia. Then there was Chamberlain and his Munich sell-out to Hitler. It was against this background that, in the years leading up to the outbreak of war, the British Communist Party and the KPD exiles had adopted the line of the ‘popular front’ which emphasised the need to organise across communist, socialist, and even liberal organisations against fascism. Therefore, working for the Government against Nazi Germany should not be understood as an easy decision for some of these refugees, yet the nuances and lessons of these decisions is underexplored in the book.

The Hitler-Stalin pact came as a further shock to many refugees. It was excused by communists as a defensive measure against Nazi Germany; the Comintern’s line became that there was nothing to choose between rival imperialisms. Once the USSR entered the war on the side of the Allies, the discomfort of many in the German and British CP’s was calmed. After the collapse of the Hitler-Stalin pact, the line of the KPD in exile resembled the line of the British CP, to subsume all activity to the war effort. As a result of these events, the leading members of the KPD exile community, who pass through the pages of this book, were, by and large, keen to cooperate in whatever ways they could with the British Government, even though the British State would be understood at least by some as representing the ‘class enemy’.

Such ambiguities are not explored in this book. A consideration of the German-speaking refugees’ commitment to the British State would have raised interesting questions. But the book certainly has its value: it reminds us of how important it is not to sink into the miasma of the politics of national identity; it reminds us of the power and importance of internationalism in a period when this Government are constantly hitting the nationalist drum and finding ever more savage ways of undermining the rights of refugees and asylum seekers; it reminds us of how ‘foreigners’ play a crucial role in the struggle against fascism.