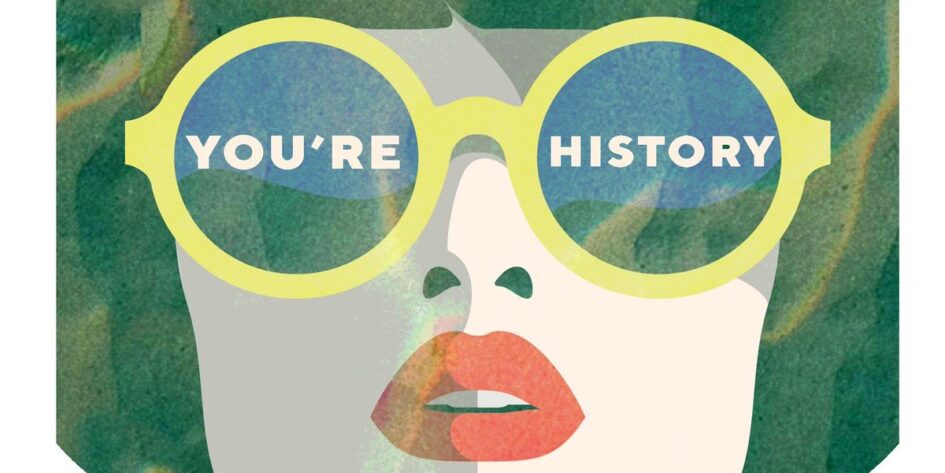 Can ridiculous music be sublime? As music and film critic Lesley Chow argues here, traditional music criticism tends to be taxonomic, ‘placing and summarising work rather than being overwhelmed and struggling to make sense of sounds’.

In You’re History, Chow recommends an alternative criticism, driven by curiosity, puzzlement and enjoyment of music without the need to fully explain it. She exemplifies this technique through bite-size studies of a wide range of female bands and artists, paying attention to video and performance, dress and choreography as much as sound and lyrics.

Women in music are subject to abundant stereotypes, but Chow contends that the acts she covers are not just non-stereotypical but actively ‘strange’. Of all You’re History’s subjects, Kate Bush has gained perhaps the most mainstream acclaim, but Chow rightly remarks on the unapologetic peculiarity of Bush’s initial appearances, her lyrical and thematic eccentricity wedded to the best of her era’s modishly melodic power-pop.

Elsewhere, Chow looks at TLC’s boisterous mix of polish and playful vulgarity, Neneh Cherry’s proto-MIA cultural blending, and the goth glam of Shakespears Sister. Not many of the artists discussed are obscure, cultivating cult credibility among a self-congratulating few. Rather, their strangeness is hidden in plain sight. These artists’ idiosyncrasies worked so well, producing single smash hits or enduring superstardom, and became so ubiquitous that their challenging nature could go unnoticed.

Chow’s maverick subjects are self-possessed, anarchic, standoffish, obnoxious, contradictory and perverse. Their work has much to say about particularly female identity and experience as well as universalisms: about ageing (Chow notes that ‘in today’s pop landscape, age is a much bigger taboo than sex’), insecurity, infidelity, the anxiety of vulnerability and the weight of experience. She shows how what might be considered technical imperfections – Janet Jackson’s ‘asphyxiated gasp’, Siobhan Fahey’s ‘guttural alto’, Carly Simon’s disorderly lyrical syntax – are used evocatively, imaginatively and in gently groundbreaking ways.

Refreshingly, there is little here on biography, on the private troubles and traumas that are so often treated as the only thing of note about female creatives – writers and artists as well as musicians – as though they cannot create art for art’s sake but must always be working out some inner reaction (usually in response to their treatment by a man). In cases like the lyrically fascinating but politically catastrophic Azealia Banks, this approach allows Chow to usefully separate the art from the artist.

Although You’re History focuses on female bands and singers, its arguments have wider application. Pop, hip hop, disco and R&B are not subject to the same level of analysis or canonisation as rock because of inbuilt cultural biases – not because they are, as often alleged, too cheap, basic or frivolous to reward critical interest. Chow is not claiming that the songs she celebrates here have nothing more to them than cheapness and frivolity, as in the ironic appreciation of art that’s ‘so bad it’s good’. Instead, she argues that this music has its own merit, with solid technical and aesthetic value located in counter-intuitive and overlooked aspects.

The question of meaning

A central question here is that of meaning. Music, we are told, must be ‘meaningful’ in order to be credible and worth discussing. But are pop, electro or R&B as ‘meaningless’ and ‘mindless’ as detractors claim? Their sound may be glossy or glib, but it is also precise and exacting, engineered to have a particular effect. Quirks of inflection and performance can subvert clichéd or banal wording and generate unexpected, subversive or arresting ‘meanings’ or responses in the listener. Indeed, it makes little sense to discuss and evaluate lyrics in isolation from their music and delivery, which can produce magic from mundane material. Chow demonstrates this well through Rihanna’s hit ‘Umbrella’, a song whose vapid verses merely support the haunting disconnected hook that ends the chorus.

Chow finds paradoxical complexity in this music’s superficiality, multiplicity, irony, and frequent refusal to make sense or be serious. It can deal flippantly or ambiguously with sharp-edged topics of heartbreak, grief and regret, without committing didactically to a single position – as befits the turbulence of these emotions. Its use of language is often illogical or nonsensical and can be entirely non-verbal (Chow devotes a great concluding section to the various uses of the ‘ooh’ in music), but it is nonetheless deeply invested with meaning, whether joy, rage, love or despair. Playful rather than po-faced, this kind of music may not lend itself to critical anointing, but it remains immensely enjoyed and beloved, regardless of the scorn often directed its way.

Chow concludes by discussing the contemporary compulsion for artists to stay on-brand, to be bland or artfully high-concept rather than earnest, and the persistent tyranny of youth in music, which is now grimly smoothing out the eccentricities that were still present up to the 1990s in TLC or Shakespears Sister. Nonetheless, she identifies the continuation of oddity in Taylor Swift’s cynical deconstruction of her own preppy malevolence, Rihanna’s sphinx-like mystique, and Nicki Minaj’s cartoony camp creativity, her multi-dimensional personae hyperactively inhabiting the space of single songs, verses or occasionally lines.

You’re History is incisive and engaging, often encouraging interactive reading as its thoughtful critique inspires you to check out for yourself the songs and performances described. Reading this voyage of rediscovery set me thinking anew about similarly strange, striking and subversive women not covered here, such as Sinead O’Connor, Missy Elliott, guitar virtuoso Sister Rosetta Tharpe and blues legends Ma Rainey and Bessie Smith. These essays made me re-evaluate female artists of my childhood and adolescence, who I had not fully appreciated at the time, or those I had enjoyed without grasping how strange it was that I loved them.

You’re History: The Twelve Strangest Women in Music is out now from Repeater