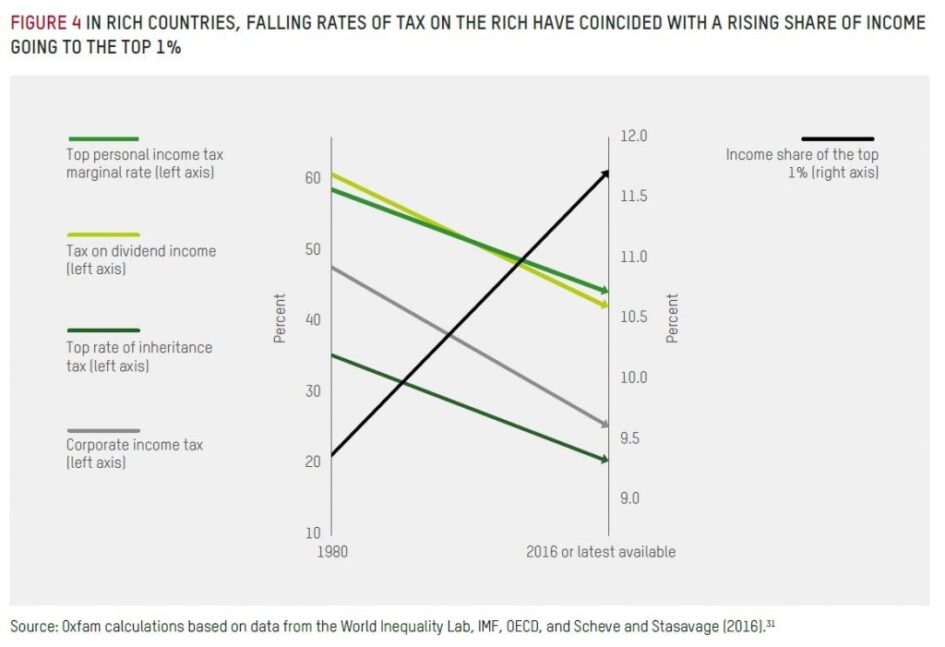 In 2020 and 2021, the wealthiest 1% of the world’s population took nearly two-thirds of all new wealth – six times greater than the wealth made by the poorest 90% of workers. And while billionaires get richer, global poverty is increasing, Oxfam warns.

“Since 2020, for every dollar of new global wealth gained by someone in the bottom 90%, one of the world’s billionaires has gained $1.7 million”, wrote Oxfam.

In the meantime, global poverty is getting worse, not better.

These shocking statistics were published in “Survival of the Richest“, a report authored by Oxfam, an international humanitarian organization dedicated to fighting poverty and hunger.

The document details how, while hundreds of billions of working people across the planet suffer from hunger, insecurity, rising costs of living, and decreasing wages, “The very richest have become dramatically richer and corporate profits have hit record highs, driving an explosion of inequality”. 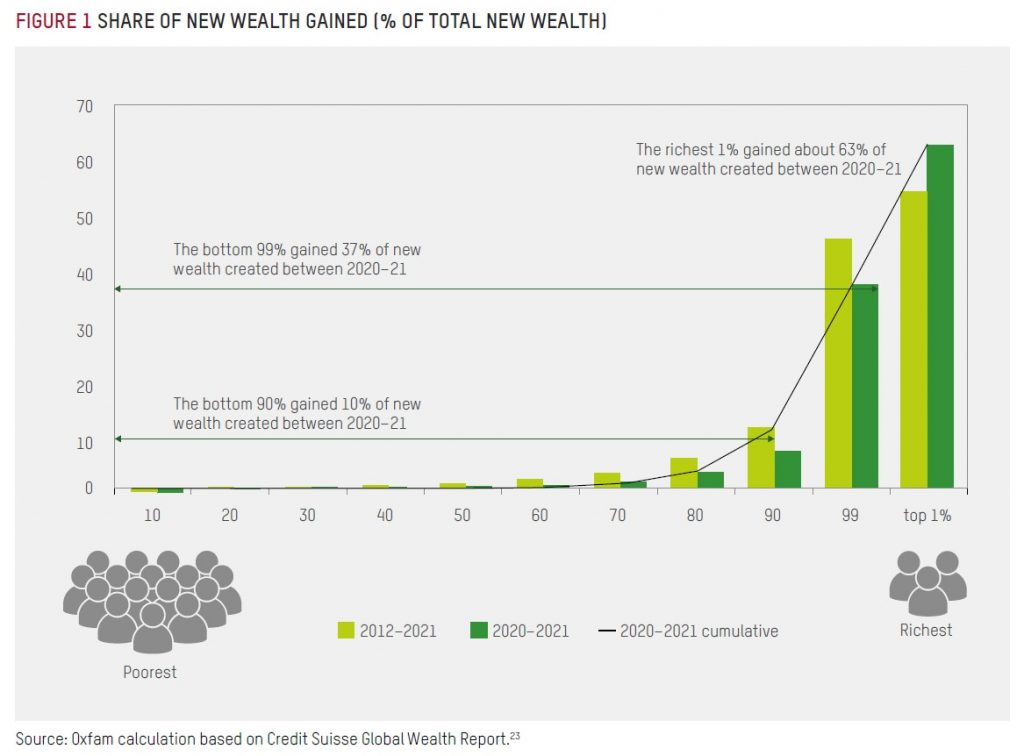 Since 2020, the richest 1% have captured almost two-thirds of all new wealth – nearly twice as much money as the bottom 99% of the world’s population.

Billionaire fortunes are increasing by $2.7bn a day, even as inflation outpaces the wages of at least 1.7 billion workers, more than the population of India.Food and energy companies more than doubled their profits in 2022, paying out $257bn to wealthy shareholders, while over 800 million people went to bed hungry.

Only 4 cents in every dollar of tax revenue comes from wealth taxes, and half the world’s billionaires live in countries with no inheritance tax on money they give to their children.A tax of up to 5% on the world’s multi-millionaires and billionaires could raise $1.7 trillion a year, enough to lift 2 billion people out of poverty, and fund a global plan to end hunger.

The report was published on January 16, to coincide with the beginning of the World Economic Forum (WEF), an annual meeting that brings together the world’s capitalist elites.

Oxfam explained, “As billionaires, government leaders and corporate executives jet in to meet atop their mountain in Davos, Switzerland, the world faces a dramatic, dangerous and destructive set of simultaneous crises. These are having a terrible impact on the majority of people” on the planet.

According to the United Nations Development Program (UNDP), human development is decreasing in more than 90% of countries.

In 2022, the human development index declined for two years in a row – the first time ever, since the UNDP began calculating it 32 years before.

In its “Survival of the Richest” report, Oxfam asserts that the “very existence of booming billionaires and record profits, while most people face austerity, rising poverty and a cost-of-living crisis, is evidence of an economic system that fails to deliver for humanity”. 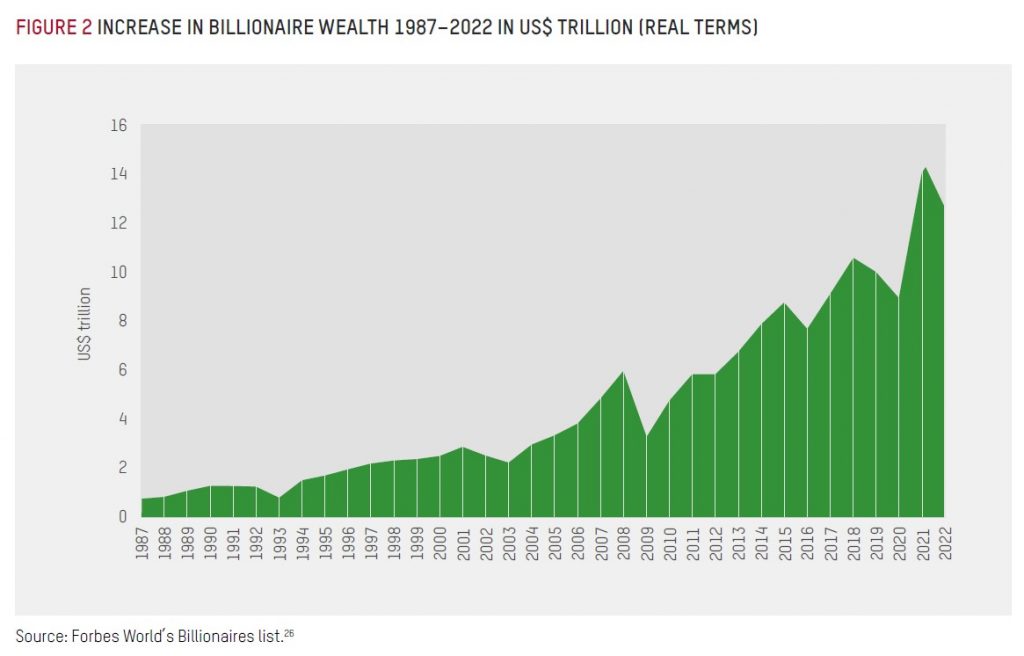 Oxfam argues that one of the main reasons for this breath-taking increase in inequality is a big decline in taxation.

Since the rice of the neoliberal phase of capitalism in the 1980s, taxes on the rich have significantly dropped all across the world, in Western countries, Asia, Africa, and Latin America. 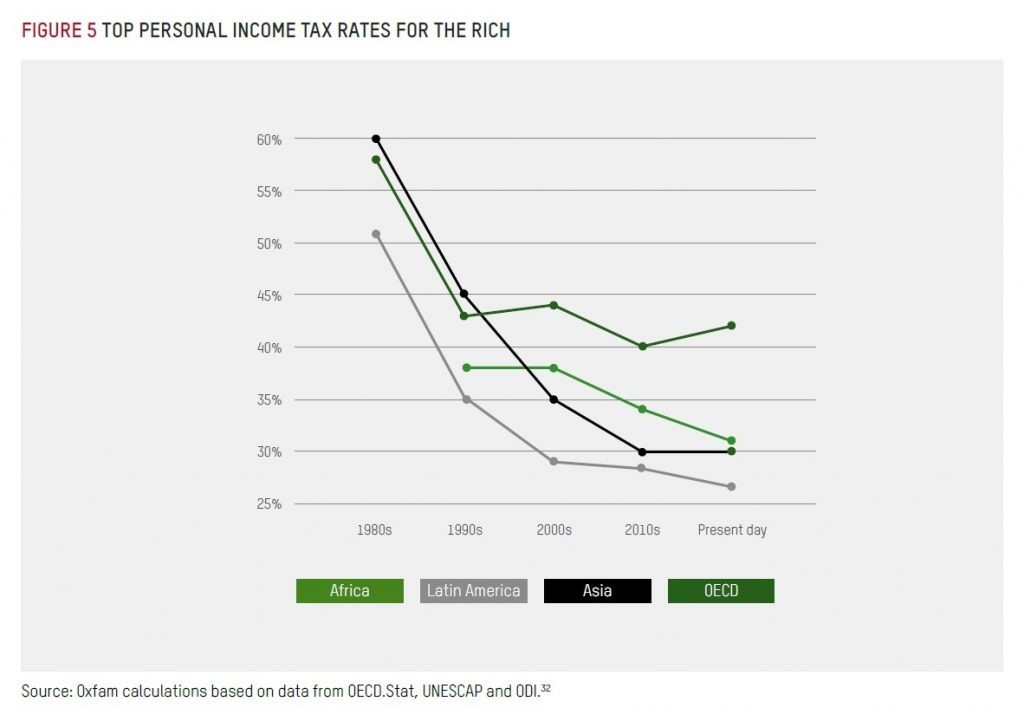 “Top rates of tax on income have become lower and less progressive, with the average tax rate on the richest falling from 58% in 1980 to 42% more recently in OECD countries”, Oxfam reported. “Across 100 countries, the average rate is even lower, at 31%”.

“Rates of tax on capital gains – in most countries the most important source of income for the top 1% – are only 18% on average across more than 100 countries”, the humanitarian organization added.

The data clearly show that, as taxes on the rich declined, the percent of income that went to the top 1% increased. Fewer taxes mean the rich get richer. 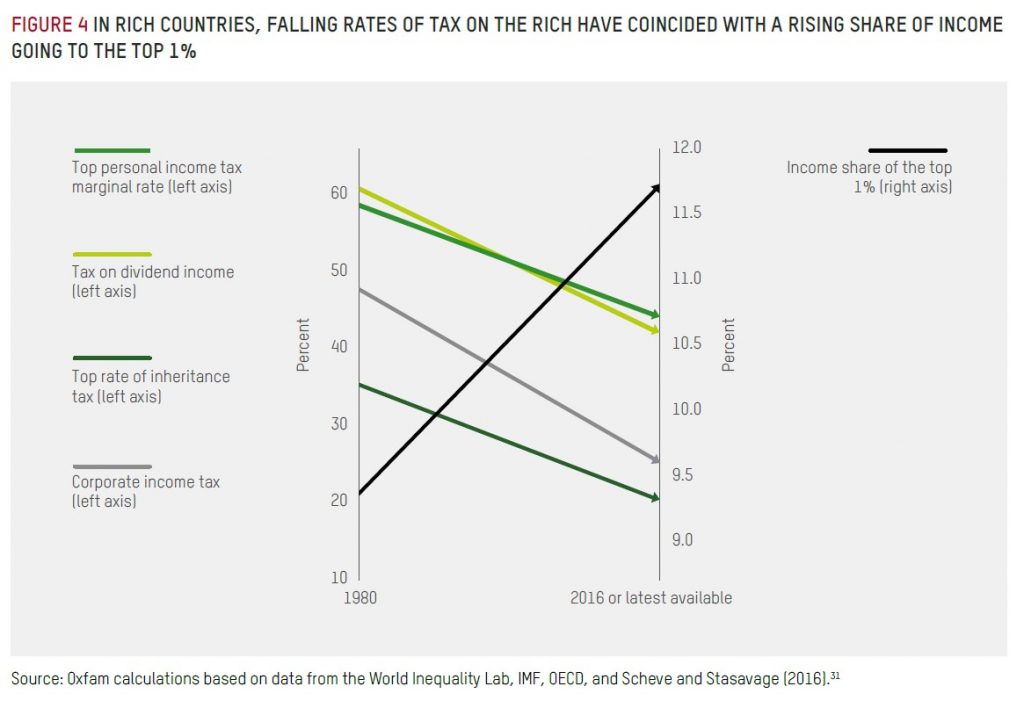 Oxfam noted, “Taxes on the richest used to be much higher. In the United States, the top marginal rate of federal income tax was 91% from 1951 to 1963; top inheritance tax rates stood at 77% until 1975; and the corporate tax rate averaged just above 50% during the 1950s and 1960s. There were similar levels of tax in other rich nations”.

It pointed out that “these high levels of tax … existed side by side with some of the most successful decades of economic development we have seen”.

The humanitarian organization called for governments around the world to boost taxes on the rich, and to invest more money in social services and programs that help working people.

“To break the discredited cycle of never-ending billionaire wealth accumulation, governments need to address all the many ways in which the economy is rigged in their favour, including on labour laws, privatization of public assets, CEO compensation and much more”, Oxfam urged.

Oxfam said its research shows that “a billionaire emits a million times more carbon than the average person, and billionaires are twice as likely as the average investor to invest in polluting industries like fossil fuels”.

‘Hyper-inequality’ exploded during the pandemic; without a global wealth tax, it will become permanent