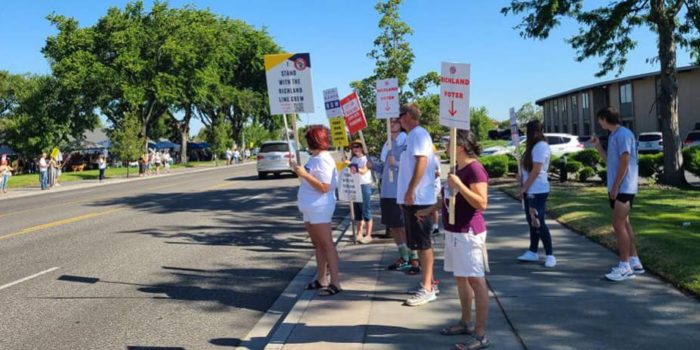 Picket in solidarity with the line crew earlier in the summer.

On August 17, community members in Richland, Washington, joined together at the Richland City Council meeting to support the Richland Line Crew in their campaign for fair wages. The Richland Line Crew are part of IBEW Local 77 and are fighting for fair wages and better treatment in order to combat the problem of understaffing and overwork, which Richland workers face, and to avoid losing more of their jobs to expensive contractors. Members of the Line Crew sat in attendance to listen to community members give their support. Together, the community and Line Crew filled City Hall’s council chambers.

The crowd, which included speakers from other unions such as AFSCME, and members of political organizations, such as the Party for Socialism and Liberation, attended the meeting to voice their support for the Richland Line Crew. During the public comments section of the meeting, community members took to the podium to tell Richland’s City Council exactly how they felt about the council’s behavior toward the city’s workers.

Pauline Santos, a voting resident and partner to the electrical foreman of Richland, spoke of the hard conditions of the understaffed workers. Pointing to the low wages and reduction in personnel, she highlighted the need for overtime to cover the shortage of workers: “Overtime is necessary to deal with the increased workload. But overtime is a burden. It steals from life, family time, effects health, etc. In my opinion, that’s not sustainable.”

Community members spoke out about the need for infrastructure maintenance. Pauline Santos said, “The city of Richland has grown exponentially in the last decade, yet your line crew has diminished. I would imagine you need more line crew, not less. So I wonder what your plan is.” WFSE and AFSCME member Ginger Wireman reminded the City Council that, “the piece of equipment that started the Camp Fire that burned the city of Paradise to the ground was $19. And it wasn’t repaired because PG&E put profits before maintenance of public facilities … The fact we’re trying to lowball and drag these guys along, when they have provided such a valuable service to us, and such reliable, safe electrical power, is obscene.”

Fifty-three year resident of Richland, Ronald Omberg, attended his first City Council meeting to back the Line Crew. “I know no member of Richland linemen personally, but I consider them our friends and neighbors. When there’s a power outage at, say, one in the morning, you make a phone call, and these are our friends and neighbors who will get out of bed to go about their dangerous work to get power to our houses again.”

Healthcare worker Shelby Covert came to offer her solidarity: “I cannot thank this crew enough for working understaffed as much overtime as they do. As a healthcare worker in this time, I can associate myself with that.” She also took time to point out the hypocrisy of the City Council — the majority of whom decided to stay home out of fear of the COVID-19 Delta variant. “There was no information about this given out to our public … I feel like this is very irresponsible. We speak that we care, we speak that vaccination is important, but even when you’ve been in person you do not wear your masks.”

Community organizer and PSL member Scott Howland remarked on the conditions of the workers: “The city has implied these workers are greedy. Greedy workers don’t struggle for fair, standard wages reflective of their area. Only mistreated workers do that.”

After the public comments were concluded, the Line Crew and their supporters departed City Hall all at once, leaving the chambers almost totally empty, demonstrating the importance of this issue in particular to the community.