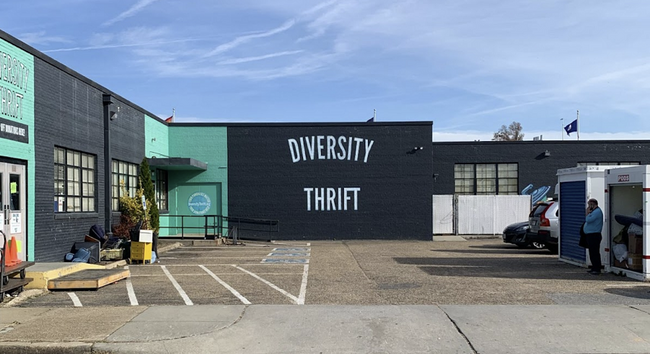 After three days of striking, starting with a walk-off on November 7, Diversity Thrift workers in Richmond, VA won considerable concessions. Prompted by unsafe working conditions due to understaffing, and the mishandling of a sexual harassment claim, workers took to the streets to demonstrate with their community. After sustained struggle, the demands of the workers  –– including higher base pay, the hiring of more employees, and stronger sexual harassment protocols and training –– were met.

After articulating their specific demands, and after a last-minute attempt to arbitrate with management the morning of, the workers were glibly told “this is America, go strike.” And they did. At around 10:00 a.m. on November 7 Diversity Thrift workers and community members gathered to demonstrate across the street from the thrift store for the duration of the business’s operating hours. Roughly a hundred community members, including members of the PSL, DSA, IWW, and UCWVA came out to demonstrate in solidarity.

Diversity Thrift has long been promoted as a bastion of inclusivity, and has been respected as a queer-friendly organization that benevolently opens its doors to the community. This branding has, in light of recent revelations, only shown the stark distinctions between image and action. A survivor of sexual harassment at the workplace filed a complaint that amounted to nothing as the offending party was restored with a promotion while the victim was passed over for three promotions. This incident has exposed a hostile working environment that does not honor the purported values of the business. In response, workers demanded mandatory sexual harassment training for all employees and management in addition to greater accountability for those found guilty of a sexual harassment, and won.

The unsafe working conditions of the business are not only limited to a socially unsafe environment, but also include immediate threats to workers’ physical health. One worker striking was in a cast due to an injury sustained at work, and workers say that many instances of injuries have simply gone unreported.

This lack of safety and respect by management is perhaps unsurprising given that many of the workers are there during a probationary period as they reintegrate into the community following arraignment in court. These court mandated community service members are not able to strike as it could possibly lead to legal ramifications and prolonged unemployment due to the difficulty of their finding work in the first place, conveniently lowering the number of workers actively on strike from Diversity. According to the Prison Policy Initiative, “formerly incarcerated people are unemployed at a rate of over 27% — higher than the total U.S. unemployment rate during any historical period, including the Great Depression.”

The organization relies heavily on this form of especially exploitative labor, in addition to understaffing and inadequate safety training, seemingly caring more about their bottom line than the workers who create the profit. Though unable to strike, these workers’ interests were upheld by those on strike in an important expression of working class solidarity. These issues are reflected in the workers’ demand for the hiring of more employees to better manage the workload and reduce injuries, a demand the company has now promised to honor due to workers’ organizing efforts.

Another issue is the lack of democracy in the company’s decision making process. Workers demanded that non-supervisory employees elect by majority vote a member to the Board of Directors as a way to raise issues on behalf of the workers. Diversity Thrift responded to this demand with a promise to launch an internal investigation into its leadership structure, and workers will continue to have to press for more workplace democracy.

In addition to an internal investigation of the company’s culture and management, hiring of more employees, and training on sexual harassment, the employees also won an increase in base pay to $15/hour from $11/hour as well as guaranteed back payment for the days those employees were on strike. Workers also won the contracting of an independent HR professional, at the behest of management, who will negotiate disputes between staff and management. The increase in base pay is a significant gain as Diversity Thrift worker and activist Aurora Higgs noted, “a lot of us are paycheck to paycheck.” With housing costs in Richmond 13% higher than the national average and a roughly 11% increase on average rent from last year, each dollar counts. The president of Diversity Thrift has also announced that he will be stepping down in addition to the Controller being placed on administrative leave pending an investigation, in accordance with the workers’ demands.

Explaining the necessity of closing the shop until the workers’ demands had been met, staff member and organizer Stephanie Miller said in a speech to the Board of Directors “they had closed the store before due to weather. We would consider this the perfect storm.” The Diversity Thrift organizing success shines a light on the need for workers to organize and fight back, sometimes escalating to the point of walking off the job in order to impact the company’s profits to win concessions for workers in a profit-driven system.

Alabama miners: ‘Whatever it takes to win this strike’