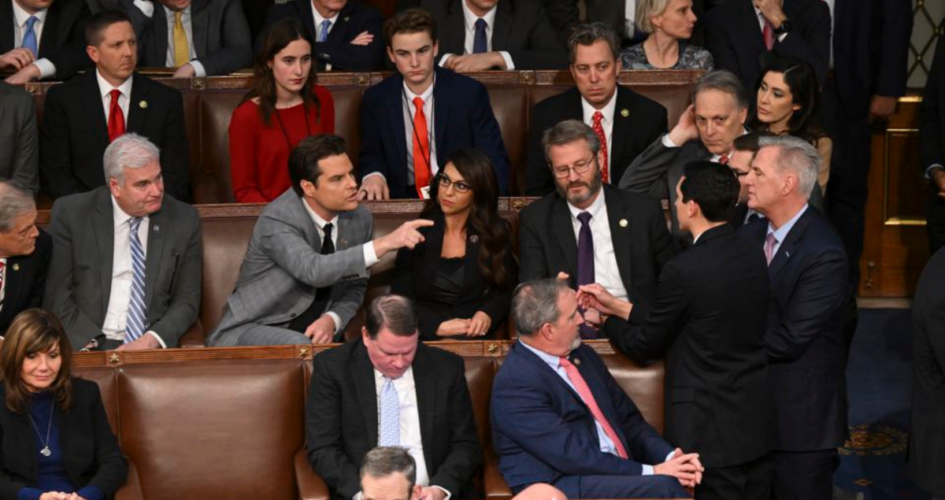 Working class people, understanding on a cellular level the many ways in which they’re battered by the ruling elite, are hungry for rebellion.

This raw hunger found expression in both Bernie Sanders’ two presidential campaigns and in the election of Donald Trump. Both figures were perceived by a section of ordinary people as representing a rebellion against the elite. “Political revolution against the billionaire class” and “Drain the swamp.”

But these two rebellions couldn’t be farther from one another.

Trump, on the other hand, marked his Presidential term by carrying out vile attacks on immigrants, women, and working people, while forcing through the Trump Tax Cuts for big business and the rich and pouring money into the border wall.

Right populism is an extremely serious threat to working people in its ability to ensnare those who are justifiably angry at the status quo with its impersonated opposition to the political elite. The pretense of fighting for ordinary people against Washington bigwigs can be used as a Trojan Horse to carry out damaging attacks on Social Security and Medicare and other vital programs.

In the race to give form to working peoples’ thirst for rebellion, right populism is currently in the lead. There is perhaps no greater example of this reality than the recent right-wing insurgency in the House of Representatives which forced Kevin McCarthy to make endless concessions to the Freedom Caucus in exchange for the title of Speaker of the House.

Who Are The Freedom Caucus?

The Freedom Caucus is the farthest-right bloc within the Republican caucus in the House of Representatives. Formed in 2015 by Tea Party members, the group advances a reactionary ideology that combines libertarian fiscal priorities and ambitions of small government with an added element of right-populist social beliefs. Many Freedom Caucus members are rabidly anti-immigrant and campaigned for election on the promise that they’d defeat the “woke agenda” in D.C.

Within the Freedom Caucus itself there’s a range of attitudes. In 2021, months after the January 6 insurrection, an informal faction called the “MAGA Squad” formed within the caucus – with Marjorie Taylor Greene and Matt Gaetz at the head. The composition of this informal grouping has shifted overtime, but its existence has continued into 2023. They represent an even farther right trend within the overall Freedom Caucus and, as the Speakership debacle showed, are far less inclined to play by D.C. rules than many of their peers.

While 20 Freedom Caucus members voted against Republican leader Kevin McCarthy for Speaker in 11 consecutive votes, after winning significant concessions from him, on the 12th vote most of them voted for him. Six members of the MAGA Squad, still unsatisfied, held out for a further four votes until finally voting “present” on the 15th ballot, allowing McCarthy to take his post. When asked why he finally voted to end the stalemate, Matt Gaetz told CNN: “I ran out of things I could even imagine to ask for.”

These “ultraconservative rebels” as the New York Times has coined them, succeeded in winning a flurry of procedural changes in the House that will enhance their own authority within the overall Republican caucus – guaranteeing that over the next two years they will have the power to continue to pull similar stunts. McCarthy may be forced to rely on Democratic votes to get things through. All of this will only deepen the existing divisions in the Republican Party.

As the Wall Street Journal pointed out, the holdout Freedom Caucus Republicans who opposed McCarthy could not be brought to heel by big money interests and Republican Super PACs because they have the support of massive small donor networks. They are also not worried about losing in upcoming elections because they know that their constituents want them to shake up the complacent ivory tower of U.S. politics that is filled with politicians happy to kowtow to corporate lobbyists and the ruthless billionaire class.

In March of 2021, Indiana Rep. Jim Banks’ confidential memo to then-Minority Leader Kevin McCarthy, marked “URGENT,” pointed out the writing on the wall: “President Trump gave the Republican Party a political gift: we are now the party supported by most working-class voters. The question is whether Republicans reject that gift or unwrap it and permanently become the Party of the Working Class.”

Since then, the gift has kept on giving. The failures of the Biden administration, and the cowardice of Democratic “progressives” in particular, has handed the right the ability to stake their claim as the primary voices calling out inflation and the rising cost of living, Fed policy, and U.S. involvement in Ukraine.

Biden’s high-profile crackdown on rail workers’ fight for sick days gave Senators like Josh Hawley, Marco Rubio, and Ted Cruz the go-ahead to tout their “No” votes on the strikebreaking bill in a disingenuous ploy to present on the side of workers. Without a genuine platform for working-class politics on the national stage, there’s nothing stopping Republicans from talking out of both sides of their mouth.

The problem is that the con is working. The Democrats are hemorrhaging working-class voters across racial groups, and this trend isn’t going anywhere. To be clear, the Democrats losing votes is hardly a loss for working people – they’re just as much fakers in their “pro-worker progressivism” as anyone. But the answers Republicans have for these voters is vicious snake oil: attacks on immigrants, voting rights, abortion rights, movements like BLM, and queer and trans people in particular. This does absolutely nothing to improve the lives of working people of any race, gender, or nationality and is a cover to smuggle through their own agenda of tax cuts for the super-rich and starving essential social services.

Big business knows it can rely on both parties to carry out its interests. Most major corporations and PACs split their contributions between Democrats and Republicans, often giving the larger share to whoever they expect to win. But they still play favorites. Let’s look at how the rail bosses spent their campaign cash in the 2022 election cycle: rail carrier BNSF’s parent company, Berkshire Hathaway, donated $454,687 to GOP campaign committees, compared to less than half of that for Democrats. Union Pacific gave a generous $90,889 to the Republicans, against the Democrats’ $66,160.

Trucking, oil and gas, building materials, automotive and steel production, and waste management all rank in the top most heavily Republican-favoring industries for political donations. The very politicians pandering to blue-collar workers are their bosses’ right-hand men and women in Congress. Furthermore, Republicans are the architects of the neoliberal destruction of the labor movement dating back to Reagan, of right-to-work laws in half the country, and of the vicious attacks on public sector unions post-2008.

Marco Rubio’s criticism of “the union bosses” for betraying their members in the railroad struggle was hardly a jab at business unionism, but an arrow in his quiver for a push against unions altogether. Rubio followed up by introducing an “employee choice” bill that would allow a single worker representative on the corporate board of companies with over $1 billion in profits, instead of unions that could serve as actual organs of struggle.

In the nascent fight over the debt ceiling, it’s becoming increasingly clear that the strategy is to combine Trump’s playbook of using broad strokes to give voice to economic discontents with the same old Tea Party politics. The MAGA wing’s “Fair Tax” legislation that they brought to a floor vote in exchange for their vote for McCarthy, would have replaced income tax, payroll tax, and estate tax with a 30% national sales tax – a criminally regressive proposal that would overload the tax burden onto lowest-income households. They have no real plan to fight inflation or lower the cost of living, but they’ll gladly use it as an excuse to fire government workers and gut public spending.

Right populism has nothing to offer working people. As the House Republicans threaten a government shutdown in the fall, we need to remember it was the threat of mass action from air traffic controllers and flight attendants that rescued tens of thousands of government workers furloughed under Trump’s shutdown in 2019. As Republicans continue their horrific attacks on the oppressed with virtually no pushback from the Democrats and NGOs, we should remember the eruption of airport protests that forced Trump to walk back his racist travel ban in 2017.  Ordinary people can’t look to the Republicans or Democrats to feed our hunger for a better world. What we need can only be found in our own power in our workplaces, in the streets, and in the struggle for a new political party that doesn’t play games in its unwavering allegiance to the core needs, and highest aspirations, of the working class.

Gridlocked: The Freedom Convoy and the New Canadian Populism

Populism and the Limits of Business Power

The abuse of the concept of “populism”

NATO Expansion: Blinken and Stoltenberg Lie Intentionally and the Media Let Them

How to lie with inequality statistics

Why Chinese “debt trap diplomacy” is a lie

Why Chinese ‘debt trap diplomacy’ is a lie