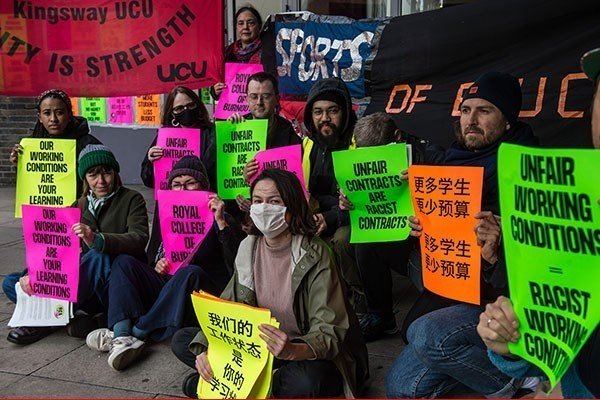 A defiant mood on the picket line outside the Royal College of Art (Pic: Guy Smallman)

University workers at the Royal College of Art (RCA) in London struck on Monday and Tuesday to demand an end to casualisation and unsafe workloads.

A staggering 90 percent of teaching staff at RCA are on zero-hour and other insecure contracts.

UCU union member Ronnie is one of those workers. He told Socialist Worker that he’s worked at RCA for seven years on casual contracts. “I’ve worked at two colleges within the RCA with no sick pay and no holiday pay for years,” he said.

“The stress just mounts up. We have more students to teach now than a few years ago, but fewer resources and time to teach them.”

A survey by the university itself found that 95 percent of workers were stressed.

Another striker, Alan, said that he had been made to reapply for his job three times in the last four years.

And, although he is now on a fixed-term contract, he is now facing redundancy. “What I went through was basically fire and rehire,” he told Socialist Worker. “Now I could lose my job completely.”

Ronny has also suffered at a university that relies on a casualised workforce. “Quite recently, I applied for the job I was already doing,” he told Socialist Worker.

“Unfortunately, I was told I couldn’t even interview for it because I didn’t have the research profile of those who’ve done a PhD.

“I’ll say it again. I was already doing this job. When I was told I couldn’t even interview, I put my head in my hands and cried.”

At the end of last month, Ronny and other workers were offered a contract—as they had worked at the RCA for over four years. “When the contract came, it included no information,” Ronny said. “There was no salary or hours, nothing.

“I was also told I would only get a week to decide whether to sign it. I just thought, why is there a date for us to sign by?”

And if insecure contracts weren’t enough, striker Cecilia says working conditions have worsened steadily. “Social spaces for staff have been largely taken away,” she told Socialist Worker. “They’ve taken away all coffee and tea facilities.

“These spaces give us a chance to talk and organise.

“Teaching staff are also not allowed to communicate with each other using email. I think it’s all a way for management to try and control us.”

Cecilia pointed out that the university’s attempts to isolate workers comes as no surprise as the institution has an anti-union record.

In December 2016 the only UCU union rep at RCA was made redundant due to restructuring by the university—but their job was the only job to go.

Those on the picket made it clear that union intimidation, heavy workloads and equality issues are all linked to the marketisation of universities. “The RCA charges its students some of the highest fees in Britain,” said Cecilia.

“You start to ask yourself where’s all that money going. Well, it’s going into the pockets of senior management.

“The numbers of those that earn more than £100,000 have gone up in recent years.

“Arts institutions are also trying to grab as much cash before the Tories’ plans to cut 50 percent funding to the arts comes in. If this happens, the arts will become less accessible, especially for working class students.”

While strikers are angry at the state of education, they are confident that strikes will force RCA university bosses to listen.

Workers will return to picket lines four three days next Tuesday and then strike between 1 and 4 and 15 and 19 November.

A united fight in education could win better pay and conditions for workers and hurl back the Tories’ and bosses’ assaults.