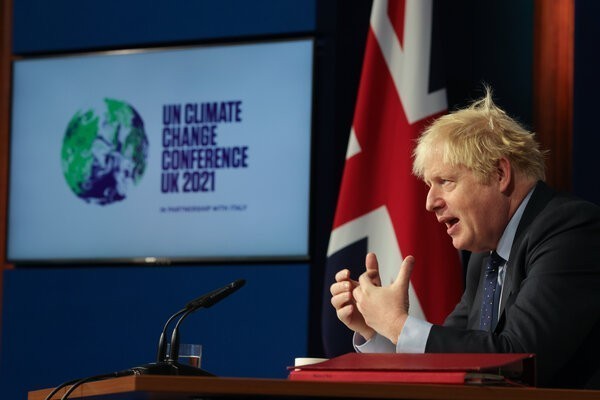 Boris Johnson is making grand climate promises in the lead up to Cop26.

Johnson is expected to announce this week that by 2035 all of Britain’s electricity will come from renewable energy sources.

But this will come with a catch. Last Friday, the government announced plans to expand nuclear power capabilities by investing in nuclear fusion to replace the burning of fossil fuels.

Nuclear fusion has been described as much safer to produce than nuclear fission. But it still produces the same dangerous ­by-products.

The technology has also never been produced on any significant scale.

Johnson also called for all of humanity to “grow up” ahead of the conference in November.

This comes after his invitation to India, China and the US to discuss trade and the climate was reportedly turned down.

India and China have so far not published any new plans to cut down on emissions.

Both are currently scrambling to buy up as much coal as possible to make up for shortages.

As of last Friday most power plants in India had only four days’ worth of coal. This has led the country to buy coal costing £11 trillion in total from Australia.

But India and China aren’t the only countries turning to coal to make up for plummeting gas reserves.

European countries have also been looking to buy more coal to meet power demands, with Russia under increased pressure to produce more.

The burning of more coal—the dirtiest and most polluting of all fossil fuels—will be disastrous for the planet.

Meanwhile US president Joe Biden is making big commitments to protect the planet.

Votes on the bill have already been delayed, with debates raging inside Biden’s Democratic Party and some senators seeking to decrease the budget allocated.

Big business is rallying to lobby against the bill. Apple and Amazon are backing a business group to crush new climate legislation.

World leaders continue to make promises to appear greener in the run-up to Cop26. But most are unlikely to keep them.