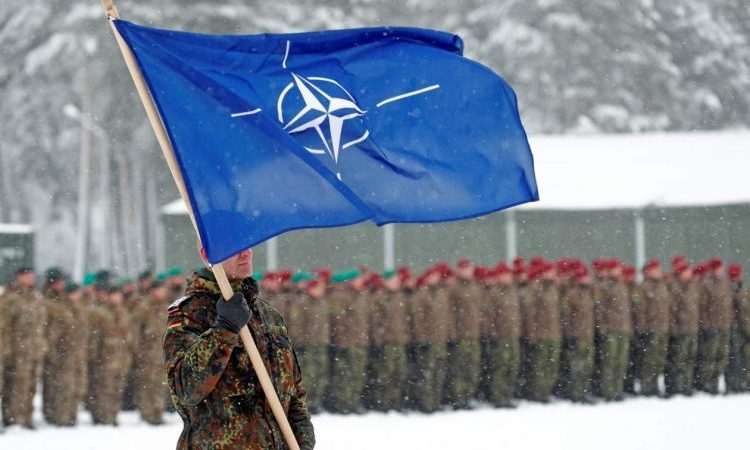 After two straight months of crying wolf over the supposed imminent threat of a Russian invasion of Ukraine, in a barrage of scaremongering and lies orchestrated by western politicians and all their tame media, US imperialism is coming under increasing pressure to deal with the real issue underlying all the hysteria: its failure to recognise and act upon Russia’s legitimate security concerns around its borders.

In particular, Russia is pressing imperialism (a) to publicly renounce any further consolidation or expansion of the warmongering Nato alliance into countries bordering on Russia, including Ukraine, and (b) to desist from using these territories as launchpads for potential missile attacks aimed at Russia.

Ever since the sad demise of the German Democratic Republic (GDR) and the reunification of Germany under imperialist rule in 1989, Nato has been progressively tightening a noose around the Russian Federation. A recent article in the Spectator usefully charts the growing security threat to Russia posed by this process.

“In February 2007, President Vladimir Putin condemned the dangers of establishing a ‘unipolar world’ and listed a range of strategic and security concerns, including the marginalisation of the United Nations, the installation of ballistic missile defences in eastern Europe – and above all Nato enlargement. He stressed that Russia ‘with a thousand years of history’ did not need to be instructed on how to behave in international affairs.

“How did the west respond? With the accession of Albania and Croatia in 2009, Nato membership rose to 28. The addition of Montenegro and North Macedonian in the last five years has brought that number to 30.” (Whisper it, but Putin has a point in Ukraine by Richard Sakwa, The Spectator, 25 January 2022)

So for over three decades, it seemed as if the tightening of the noose could not be stopped, that the encirclement of Russia (and its eventual balkanisation) under the sway of a unipolar world order was a foregone conclusion.

The shifting balance of forces

But over these three decades massive changes have been in train. The USA has instigated, and lost, a string of disastrous wars, culminating in the panic flight from Afghanistan. These wars, aimed at shoring up US hegemony, have in fact hastened its erosion.

Meanwhile, Russia’s determined stand in defence of Syria’s sovereignty, and positive contribution to diplomatic efforts to stabilise the middle east, have won the grudging respect even of its enemies. On the economic front, sanctions intended to weaken Russia’s economy have had the reverse effect, triggering its diversification. And militarily, Russian armed forces have been modernised and strengthened.

Over the same period, China’s star has also continued to rise, and increasingly Beijing and Moscow have come to share a common role, offering developing countries a way out of the ‘unipolar’ straitjacket imposed by Nato and the European Union. So whilst Nato might see Ukraine as the last piece of the jigsaw, and is itching to see the puzzle completed and Ukraine seamlessly slot in as the 31st Nato state, Russia has a better grasp of which way the wind is blowing.

Contrary to what has been asserted in all the imperialist media for the past two months, Russia is not now, and never has been, threatening to invade Ukraine. The only ‘proof’ to the contrary that has been offered is the conduct of military exercises by Russian troops on Russian soil.

The whole elaborate charade has been designed to paint Russia as an ‘aggressor’ in the public mind, preparing the ground for the coming (real) war. Refusing to be drawn into shadow-boxing with the USA over an invented military threat against Ukraine, Russia instead is challenging the US to have an adult conversation about ending the permanent security risk to Russia posed by Nato’s presence and activities on Russia’s border.

Whilst the US dreams of encircling and balkanising Russia, the eagerness of its Nato partners in crime to commit to an open-ended military confrontation with Russia is in increasing doubt.

“French president Emmanuel Macron called on the EU to forge its own plan for ‘security and stability’ with Russia, in a move that risks undermining western solidarity in the face of Kremlin aggression towards Ukraine.

“In a speech to the European parliament, Macron called for EU states to ‘conduct their own dialogue’ with Russia rather than support ongoing diplomatic efforts led by the US and Nato – and in sharp contrast to a plea from US secretary of state Antony Blinken for ‘unity’.

“Macron said that despite the joint EU-US diplomacy, Europeans had to offer Russia a solution to de-escalate tensions with Moscow in the ‘coming weeks’.

“‘We should build as Europeans working with other Europeans and with Nato and then propose it for negotiation with Russia,’ he told MEPs in Strasbourg on Wednesday. ‘It is good that Europeans and the United States coordinate, but it is necessary that Europeans conduct their own dialogue.’”

Shortly after this diplomatic sortie, apparently made without any consultation with France’s EU partners, US secretary of state Antony Blinken and Nato’s Jens Stoltenberg got leading EU diplomat Josep Borrell on the phone to find out what was going on. The three are said to have agreed on the need for “a strong, clear and united transatlantic front” – an eloquent confirmation of its absence. (Paris and Brussels reassure US after Macron’s call for EU-Russia talks by Henry Foy, Victor Mallet and Mehreen Khan, Financial Times, 20 January 2022)

For its part, Russia has made clear its preference to speak with the organ grinder rather than the monkey. Russian deputy foreign minister Sergei Ryabkov noted: “We would prefer to find an understanding and do a deal with the Americans foremost. Bringing in too broad a circle of countries into this process seems counterproductive to us.”

There were jitters elsewhere in Europe. Croatia’s president interrupted his visit to a sweet factory to declare: “Croatia will not send any troops in case of an escalation. On the contrary, it will recall all troops, to the last Croatian soldier,” adding: “All that is happening in the antechamber of Russia. One must reach a deal that will take account of the security interests of Russia.”

A further complication ensued when Croatia’s defence minister repudiated his president’s words. According to the constitution, the president is commander in chief of the army, but the defence minister is responsible for Nato deployments. The White House need not anticipate much back-up from that quarter. (Croatia sows confusion with threat to pull Nato troops over Ukraine crisis by Andrew Gray and Camille Gijs, Politico, 25 January 2022)

More seriously, Germany is distinctly wobbly over offering support for US meddling. The German government is not only refusing to send arms to Kiev, but is actually holding up a shipment of nine howitzers going from Estonia to Ukraine. Latvia’s defence minister made the acid comment that these days German deterrence was “not sending weapons to Ukraine, but a field hospital”. (Where Is Germany in the Ukraine standoff? by Katrin Bennhold, New York Times, 25 January 2022)

Suggestions that the Nord Stream 2 gas pipeline, recently completed but awaiting certification, could be blocked in order to put pressure on Russia, have been slapped down on the grounds that the project is a private sector initiative and completely separate from the Ukraine issue. (More to the point, Nord Stream 2 is core to Germany’s future energy security.)

Voices have also been raised in Germany against the exclusion of Russian banks from the Swift payment transaction network, arguing that such a move would harm Germany’s own economy.

This is wise advice on which Joe Biden should ponder.

Emergency rally at White House demands ‘No War with Russia,’ NATO be disbanded

Russia says US ignored its security demands over Ukraine

NATO Expansion: Blinken and Stoltenberg Lie Intentionally and the Media Let Them