Russia stands firm against the latest imperialist provocation over Ukraine 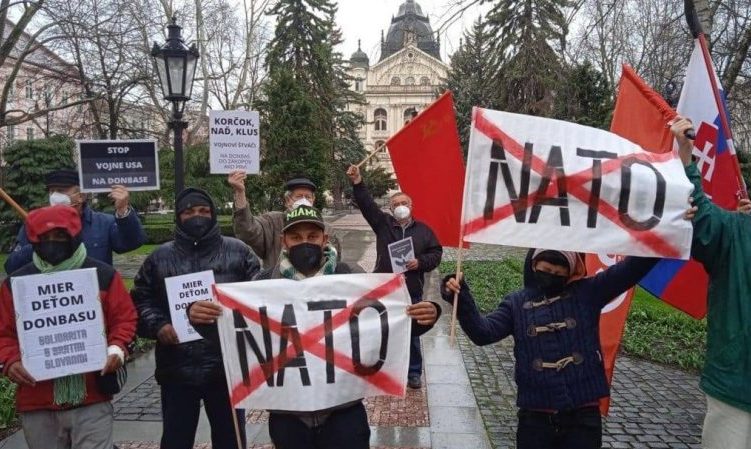 The current imperialist provocation, shunting fully one half of Ukraine’s armed forces right up against the Russian border whilst at the same time falsely accusing Russia of plans to invade Ukraine, is being actively assisted by all the mainstream media.

Their relentless lies about the allegedly aggressive intentions of Russia have nothing to do with honest journalism (currently languishing in solitary confinement in Belmarsh) and everything to do with preparing public opinion in the west for future wars waged by imperialism against any nation that dares to cleave a path independent of its hegemonic diktat.

How ludicrous are Nato claims of Russian aggression – of which no instance can be given other than troop movements taking place on Russian soil – is brought into relief by the extremely well-documented aggressive actions taken by Nato against Russia.

Despite assurances given to Soviet leader Mikhail Gorbachev at the time of the break-up of the Soviet Union that Nato would not extend itself into former Soviet or Warsaw Pact states, those assurances were very soon honoured in the breach, with Nato admitting countries such as Poland, Lithuania, Latvia and Estonia. In June 2021, at the Nato summit in Brussels, Nato made it quite clear that it intended to move into Ukraine as well.

It will be recalled that it was originally proposed that Ukraine should join Nato in 2008 and the process of integrating it was begun but was then suspended when Viktor Yanukovych won the presidential election in 2010, as he preferred Ukraine to remain non-aligned. For this reason, among others, Yanukovych, the elected president, was removed in a western-backed coup in 2014, yet another example of imperialist aggression aimed against Russia. And now the issue of Ukraine joining Nato has been revitalised.

Should Nato extend itself into Ukraine, President Vladimir Putin warned about the prospect of the US-led military bloc’s hardware appearing on Ukrainian territory, arguing that if western missile systems are deployed there, “their flight time to Moscow will be reduced to 7-10 minutes, and if hypersonic weapons are deployed – to just five”. (Russian president Putin says US is to blame for tensions in Europe, Sputnik News, 21 December 2021)

Imperialism is mortally offended by the very existence of strong and independent countries like China and Russia, countries which are ready and able to defend their independence and which can offer smaller countries relations on a basis of reciprocity, not hegemony. The sight of Russia and China carrying on regardless whilst imperialism plunges ever deeper into crisis drives the west into a paranoid frenzy.

To the imperialist mindset, it is unthinkable that the markets and resources of such countries should not be freely available for plunder and domination by foreign monopoly capital. By this logic, the sooner Russia and China can be broken up and assimilated into the ‘rules-based international order’, the sooner will the west secure a temporary reprieve from the consequences of its own crisis of overproduction.

Any and all steps Russia takes to make sure it will not succumb to this fate, such as demanding guarantees (as Vladimir Putin is doing) “to exclude the possibility of Nato moving any further to the east, and deploying threatening weapons close to Russian territory”, are universally presented in the media as further proof of Russia’s non-existent ‘aggression’.

Media and politicians act in consort to promote the big lie

Following in the footsteps of Joseph Goebbels, imperialist statesmen and media hacks pass the propaganda ball back and forth between them. The knack is not to waste time trying to concretely explain what Russia does that could reasonably be construed as ‘aggression’. Instead, Russia’s ‘aggression’ is taken as an a priori assumption requiring no proof, along with other axiomatic ‘truths’ like ‘Russia invaded the Crimea’ (ignoring the referendum which demonstrated beyond the shadow of a doubt that Crimeans wanted out of Ukraine) and ‘Putin’s a dictator’ (ignoring his obvious popularity among Russians, who keep on electing him president).

These ground rules of imperialist consensus are accepted by all ‘men of good will’, and anyone who is so lacking in manners as to question them must by definition be a Russian ‘bot’.

When US secretary of state Antony Blinken told a press conference in Latvia that “any escalatory actions by Russia would be of great concern to the United States, as they would to Latvia, and any renewed aggression would trigger serious consequences”, none of the assembled throng of mercenary hacks dreamed of asking how Russia could promise not to ‘escalate’ acts of aggression which had not occurred in the first place, or could promise similarly not to ‘renew’ aggression which only existed in Blinken’s paranoid fantasies.

You might just as well ask a man if he is still beating his wife.

Will Nato really come if the Ukraine junta calls?

Moving from fantasy to reality, the Russian foreign ministry identified the actual source of aggression in the region, noting that fully half of the entire Ukraine army plus a great deal of military hardware was being parked in the Donbass region, a piece of information that is absent from all mainstream media. In a further hostile move, the president of Ukraine is trying to get a bill through the Rada clearing the way for foreign troops to enter the country as part of Nato exercises.

And lest it be thought that Moscow is making up tales about the Kiev junta deploying heavy weaponry on the Russian border, hear how the head of Ukraine’s own military intelligence service, Kirill Budanov, boasted back in November that advanced Javelin tank-busting systems had already been deployed to Donbass. Where is the media chorus denouncing the ‘escalation’ of aggression by Kiev?

Whether this dangerous game played by the US state department will spark a conflagration is hard to judge. Nato head Jens Stoltenberg, whilst joining in the game and muttering mysteriously about “large and unusual” Russian troop formations, also cautioned that Ukraine is not (yet) a member of Nato and cannot automatically count on Nato military support.

And when pushed on the question of what the west could do to punish Russia for any supposed aggression, Blinken’s response was somewhat lame, threatening a “range of high-impact economic measures that we’ve refrained from using in the past”.

British defence secretary Ben Wallace has also said it is “highly unlikely” that Britain or its allies will send troops to defend Ukraine were Russia to “invade”.

“Wallace said that Ukraine was not a member of Nato and so the concept of collective defence did not apply. He told The Spectator magazine: ‘It is not a member of Nato so it is highly unlikely that anyone is going to send troops into Ukraine to challenge Russia. We shouldn’t kid people we would. The Ukrainians are aware of that.’” (Britain unlikely to send troops to help Ukraine, says Ben Wallace by Bruno Waterfield, The Times, 18 December 2021)

This sudden show of prudence is in all probability not unrelated to the fact that in order to protect itself against Nato aggression, Russia has developed extraordinary new weaponry to counter it:

“Russian defense minister Sergey Shoigu [has revealed] that Russia’s new high-tech hypersonic missile – capable of flying through the air at around nine times the speed of sound – has finished testing and will begin shipping to the military in 2022. He also said Moscow will be investing $3.5bn into upgrading the arsenal in the coming years.

“‘By 2026, the number of carriers of high-precision, long-range weapons will grow by 30 percent, and the supply of cruise missiles of various types will double,’ the minister explained.

“In November, Putin stressed the importance of developing and implementing technologies ‘necessary to create new hypersonic weapons systems, high-powered lasers and robotic systems that will be able to effectively counter potential military threats, which means they will further strengthen the security of our country’.” (Putin sets out military threats facing Russia by Layla Guest and Gabriel Gavin, RT, 21 December 2021)

The sanctions already in place against Russia have not had the intended effect, rather encouraging diversification measures that strengthen the economy. And the measures that the US ‘refrained from using’ in 2014, the threat to ban Russian access to the Swift system of international money transfers, have come a bit late, as in the intervening period Moscow has developed its own systems instead.

President Putin has now taken the initiative and has made a series of security proposals in the form of two draft treaties, one with Nato and the other with the United States.

These would require that the United States and its allies halt all military activity in eastern Europe and central Asia.

“Nato should offer written guarantees that it would not expand farther east towards Russia and would halt all military activities in the former Soviet republics, a vast swath of now-independent states extending from eastern Europe to central Asia …

“It demanded that Nato withdraw military infrastructure placed in eastern European states after 1997, the date of an accord signed between Russia and Nato that Moscow wants now as a starting point for a new security treaty.

“Russia is also insisting that Nato countries do not deploy offensive weapons in states neighbouring Russia, including countries not in the alliance — a reference to Ukraine. And the proposal suggested a ban on military exercises at strengths of more than a brigade in a zone along both sides of Russia’s western border, an issue that would address the current military build-up near Ukraine.” (Russia lays out demands for a sweeping new security deal with Nato by Andrew E Kramer and Steven Erlanger, New York Times, 17 December 2021)

Russia in turn is offering parallel guarantees to the US and other western countries.

Needless to say, the reaction from Nato was an outraged ‘No way – Russia can’t dictate terms to us’. But nevertheless they have set up talks on the terms of the proposed treaty that will take place in Geneva in January 2022.

If the talks fail and Nato and western imperialism continue to engage in their aggressive attempts at encircling Russia, President Putin made it clear that he was prepared to take all necessary steps to defend his country.

Whether or not imperialism decides to haul back its Ukraine dogs of war on this occasion, there can be no doubt that imperialist war is the direction of travel, and such stunts as these are designed to smooth the way and lead public opinion by the nose.

By standing up to these provocations on its borders, Russia is showing the world that imperialism can and must be resisted.

US-organized provocation against Cuba ‘fizzles out’

Cuba faced with reactionary provocation on 15 November: how to defend the revolution?

Cuba faced with reactionary provocation – How to defend the revolution?