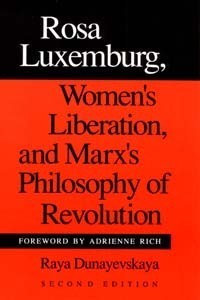 Revisit a high point of International Women’s Day, 105 years after working women in Russia began the Revolution that brought down the Tsar. From Rosa Luxemburg, Women’s Liberation, and Marx’s Philosophy of Revolution by Raya Dunayevskaya:

In the continuing imperialist war, which had wrought such havoc and brought such misery to the Russian masses, the various left organizations thought it right to celebrate International Women’s Day at a regular meeting….However, the women of the Vyborg textile factory categorically refused to limit themselves to a closed meeting.

Despite the advice of all political tendencies, they went out on strike, 50,000 of them. The next day they appealed to the metal workers, led by the Bolsheviks, who then joined the strike; now there were 90,000 out.

‘BREAD’ AND ‘DOWN WITH THE WAR’

Someone cried “To the Nevsky!” and the demonstration was joined by a mass of other women, not all of them workers, but all demanding “Bread!” Whereupon that slogan was drowned out with “Down with the war!” By this time, the third day of the strike, there were 240,000 strikers; the Bolsheviks issued a call for a general strike. The police opened fire and some fell dead, but the Cossacks had not unleashed their fury on the strikers.

COSSACKS DID NOT SHOOT DOWN STRIKERS

The women went up to the Cossacks to ask whether they would join them. They did not answer but, wrote Trotsky, “the Cossacks did not hinder the workers from ‘diving’ under their horses. The revolution does not choose its paths: it made its first steps toward victory under the belly of a Cossack’s horse.”

On the decisive fifth day, the prisons were opened and all political prisoners were freed. At the same time, the mutinous troops descended on the Tauride Palace. Thus descended on the earth the day of destruction of the Romanov monarchy.

Historic photo taken November 8, 1917, of revolutionary sailors who stormed the Winter Palace the…

For revolutionary women’s history explore the Archives of Raya Dunayevskaya