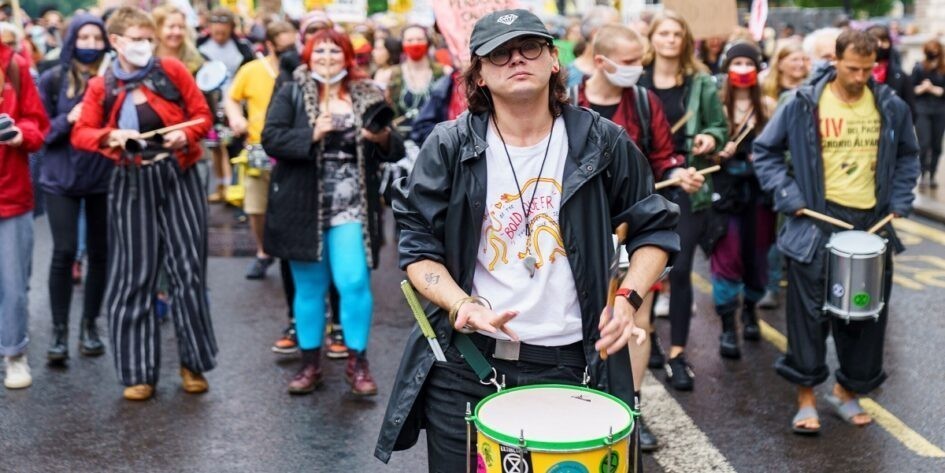 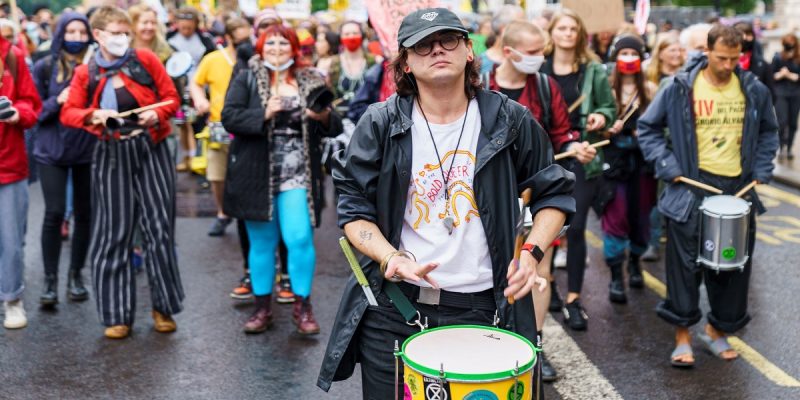 The author with a drumming band at a protest in London, August 2021. Photo by Jonathon Vines

In my activism and doctoral research in the London samba-fusion community, my goal is to learn how to use culture as resistance.

Samba, as a Brazilian music genre and culture, has always been explicitly political. There’s some mystery about its evolution, but we know it came from the music and dance traditions of black Brazilians, inherited from enslaved ancestors. Black and working-class Brazilians combined their traditions with European music and dance to create and celebrate a culture of their own, particularly during carnival season. Samba has been commercialised and appropriated frequently, but its process and output always somewhat reflects its political context.

European samba-fusion is a tiny genre of grassroots music inspired by samba percussion. Our tunes are designed to be accessible to small bands and inexperienced players rather than to authentically represent any particular samba genre. Activism is integral to the samba-fusion movement – whether explicitly as protest, or implicitly as building inclusive music-making communities.

Twenty-five years ago, anthropologists Chris Knight and Lionel Sims founded a band called Barking Bateria after seeing the Liverpool School of Samba playing on the picket line in support of the Liverpool dockers. Barking Bateria supported the London Reclaim the Streets demonstrations, creating a set of tunes that samba-fusion and ‘sambactivism’ bands still use. While police could confiscate sound systems used by Reclaim the Streets protesters, a band was considerably harder to confiscate.

From the collaboration of Barking Bateria and Reclaim the Streets came Rhythms of Resistance (ROR), a band that would start an international movement after participating in the September 2000 protests at the meeting of the World Bank and International Monetary Fund in Prague. There are now RoR bands across Europe and North America. RoR’s style also resembles that of Afro Bloc Brazilian bands of the 1970s, which performed during protests within the black community.

In London, RoR and Barking Bateria are no longer active, but the samba-fusion movement lives on in Sambatage, Sambattalion, Samba Sisters Collective and the Extinction Rebellion drummers.

I joined Sambatage (also a SOAS student society) in 2019. I didn’t have any musical experience, or connections to London activist communities, but after only a few practices, I was taking part in SOAS’s political life. As with Barking Bateria and RoR, our purpose is to bring energy and attention to social justice protests through music.

There’s no entirely safe way to protest, especially for marginalised folk, but sambactivism aims to be safer. A band moves as one, with our noise and big drums as a barrier, so no-one’s alone. We’re nonviolent and non-confrontational; players don’t need to talk to, let alone debate with, onlookers. With no hierarchy, we choose our level of risk together. Leadership is a temporary role, and directing shared between band members. This is both more democratic and safer, as no individual can be identified as the organiser. During one of my first protests with Sambatage, following the 2019 election, several band members felt unsafe as the march met the police. We made a band huddle by the roadside and decided to call it a day.

It helps that nearly everyone I’ve met in the samba-fusion community has been nice. A few months before joining SOAS, I had top surgery. While changing my shirt after a Sambatage performance, I warned a bandmate next to me that I had pretty visible scars, and they replied that the band wouldn’t be serving its purpose if I felt unwelcome in any way.

Inevitably, there have been uncomfortable situations and disagreements – particularly in larger groupings like the XR bands – but overall, we’re remarkably inclusive and cohesive. I’ve met several people who’ve come into activism through a band because they’ve felt so welcomed, which has challenged my assumptions about what motivates people to take action. Detailed theoretical knowledge doesn’t always come first – sometimes it’s finding out what you can do and who you can do it with.

When I first started playing, I decided I was too anxious about making mistakes to ever feel confident enough to direct, but two years later, I’m directing and teaching regularly. Learning that it’s okay to be imperfect has been key to developing confidence. In fact, accepting our mistakes and silliness is an act of resistance. The state wants us to respond to their violence with fear and obedience, or anger that will justify their oppression. RoR’s tactical frivolity responds to state violence with ridicule: the first bands wore pink carnival costumes, resulting in vivid images when band members confronted police.

Through Sambatage, I found out about the London Extinction Rebellion drummers building a band in preparation for the 2019 ‘October rebellion’. The XR bands are the most recent development, created in April 2019, and have grown incredibly fast nationally. However, simplifying the RoR tunes and using recycled kit drums mean they’re another step away from authentic Brazilian samba, and a focus on practice over theory means that many aren’t aware of the distinction, although such conversations are now becoming more widespread. Band members with experience in traditional samba have pointed out that calling ourselves ‘samba’ could be misappropriating the word. In London, we now call ourselves XR Drummers, but this arguably fails to address the wider issue of our appropriating Brazilian samba.

There will always be a place for a band in a huge, noisy march, but some of our most valuable contributions have been at smaller, local actions. A band can make ten people sound like 100, give folk the confidence to make their protest more impactful and build connections between communities. For example, the London XR bands recently worked with Black Lives Matter Enfield to protest against the expansion of the Edmonton incinerator.

Ultimately, all samba-fusion bands are using music rooted in marginalised cultures and communities of colour, and we must be conscious of that, proactively making connections with marginalised communities and accepting criticism. The most important thing I’ve learned is that mistakes aren’t bad. What matters is how we work with our imperfections.

Victor Max Smith is a doctoral student at SOAS, University of London, researching a social history of the samba-fusion movement

On Joining the Military and Marching to the Left

We need our own party, a labor party

Stochastic Parrots: How Natural Language Processing Research Has Gotten Too Big for Our Own Good