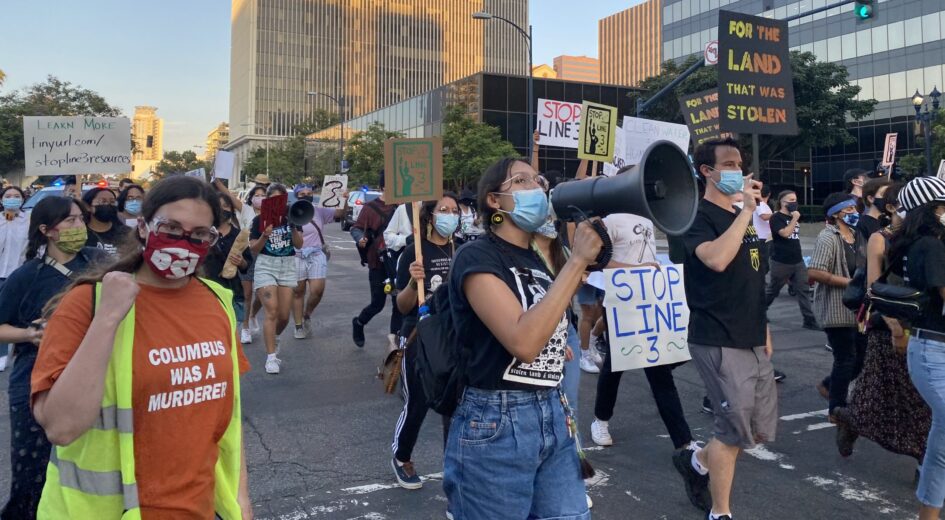 On the evening of August 25, several organizations and dozens of community members came together as part of a countrywide day of action to stop the construction of the Line 3 tar sands pipeline. Anakbayan San Diego, Liyang, Umoja and the Party for Socialism and Liberation held a march and press conference in solidarity with water protectors marching on the Minnesota State Capitol building just hours earlier.

The event began on the outskirts of Balboa Park. Demonstrators gathered and then marched one mile to the Environmental Protection Agency building in Downtown San Diego. Chants such as “Water Is Life!” rang out along the way. Upon arrival, several organizations and individuals spoke in front of the EPA building to support the action taking place in Minnesota and the broader struggle led by Indigenous peoples against U.S. imperialism and colonialism.

Victoria Abrenica of the Spring Valley Cleanup Crew compared the struggle against water pollution on Ojibwe land in Minnesota to that on unceded Kumeyaay territory in San Diego: “Just under 200 years ago, the Tijuana River Valley was a vibrant and diverse ecosystem that had hundreds of different plant and animal species and sustained human civilization for 10,000 years…. Colonialism and capitalism have turned this body of water that was billions of years in the making into the chronic health hazard that it is today.”

Huitzilopotchli Marron of PSL also expressed an anti-colonial sentiment. He said, “Even beyond Minnesota, Indigenous people are leading the fight for environmental justice and liberation from capitalist imperialism and colonialism.” Marron continued, “Whether it be the Movement Toward Socialism in Bolivia, the Perú Libre movement and the election of socialist Pedro Castillo, or the arduous struggle of Palestinian and Korean people against their foreign occupiers, history is being made now…”

After the press conference, Liberation News spoke with Alastair “Running Bear” Mulholland. Mulholland is a writer for Indian Voices newspaper and a member of the International Brotherhood of Electrical Workers Local 569. He told us, “We’re all related, we’re all connected. The Tijuana River Watershed [is] one of the most polluted in the country,.. the Indigenous struggle of the Filipino people,.. the African struggle for international African unity…. The sooner we come together, the sooner we can overcome all the problems we’re facing.”