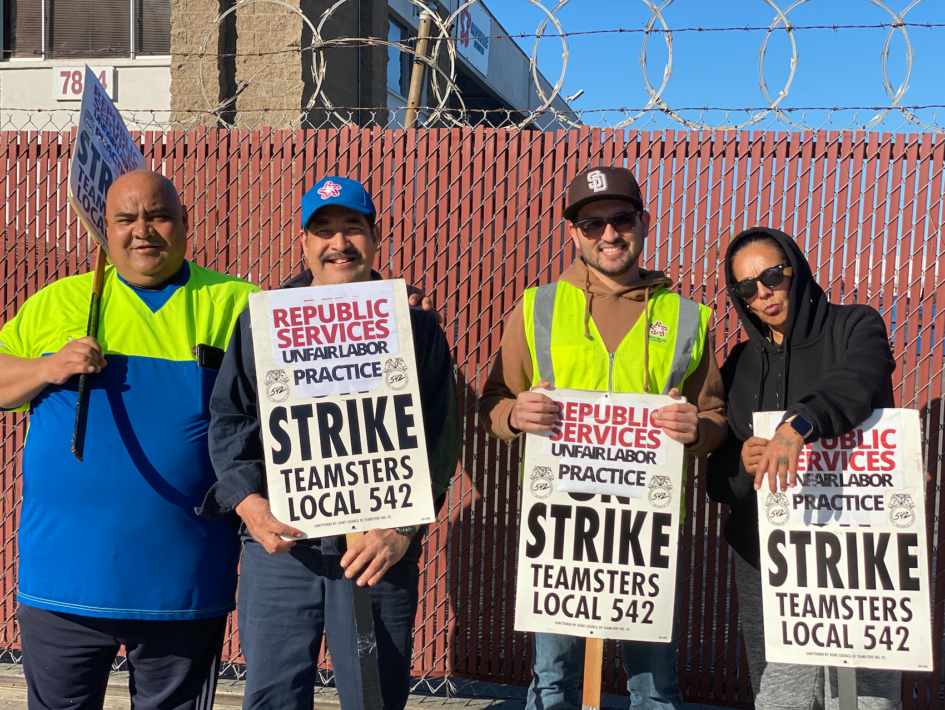 These workers won wage increases, improvements to their health insurance plan and a $1,000 bonus. The final concessions made by Republic Services fall short of the union’s demands. However, Teamsters Local 542 is “cautiously optimistic that Republic knows that these members will pull the trigger again if the company refuses to take them seriously,” as the union expressed in a statement announcing the end of the strike.

Republic Services customers, neighbors, community organizations and unions — including IATSE Local 122 and Encore workers who are currently fighting for a fair contract — came out to show solidarity with Teamsters Local 542 during the strike.

The struggle between Republic Services and their workers is not restricted to San Diego County. Over 300 trash service workers in Washington went on strike in solidarity with their union siblings in San Diego. Struggles for a new union contract are taking place at Republic Services sites across the country, including recently in Orange County, California, where they also led to a strike.

While some Teamsters Local 542 members are disappointed their effort did not result in total victory for the union’s demands, many members were eager to resume cleaning the city. Teamsters member Laderer Hampton told Liberation News, “It’s not [our union] that’s holding this up. We want to go back to work.”

Hampton also said, “The only reason why it’s like this is because they don’t want to give us a fair contract.”

So if not a fair contract, what brought the strike to a halt? There are several contributing factors.

Republic Services faced threats of divestment by the mayors of San Diego and Chula Vista. San Diego mayor Todd Gloria gave Republic until Jan. 16 to reach an agreement with the union. The indication by Republic that such a move could result in layoffs put workers in a tough situation.

On top of that, Republic promised this contract offer would be their last, which they also said about previous iterations. The company’s refusal to negotiate with Teamsters Local 542 in good faith made even incremental movement at the bargaining table difficult. The union’s demands for full social benefits, shorter work days (shifts can last 14 hours), adequate staffing and a living wage were ignored by Republic which took a “take it or leave it” approach to contract negotiations.

Like many strikes, this one didn’t result in a complete victory for the union’s demands, but these workers should be commended for their heroic efforts. They won important material gains: wage increases, lower health insurance costs and a $1,000 bonus. Perhaps most importantly, Teamsters Local 542 paved the way for San Diego County sanitation workers to stand up and demand better for themselves, their families and our class.