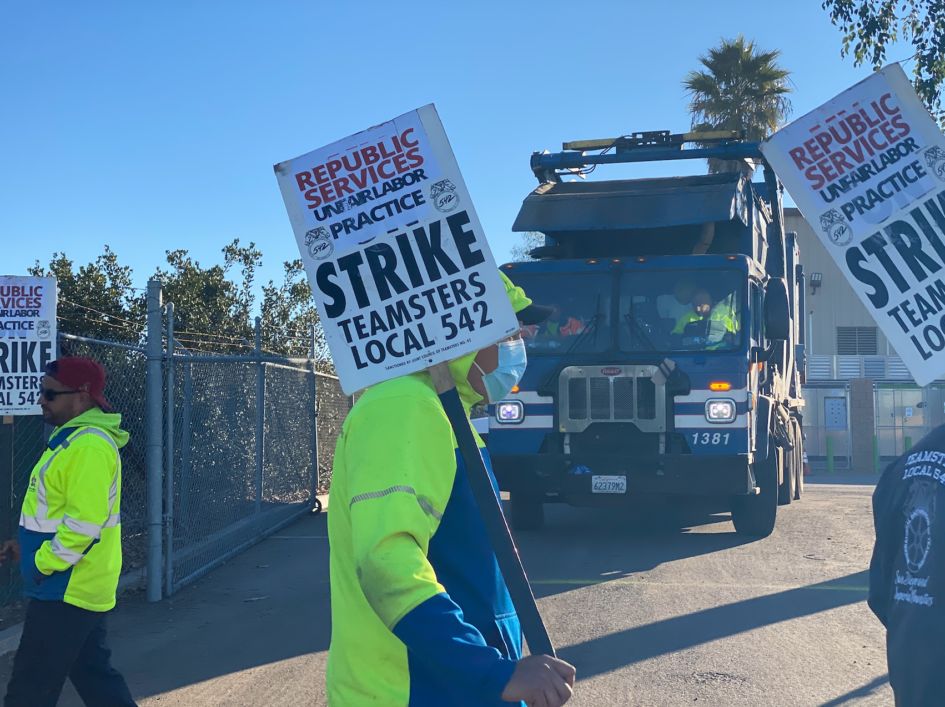 Since Dec.17, around 250 sanitation workers from Teamsters 542 have been on strike across San Diego County. It is the first strike in Teamsters 542’s history.

Union members say their primary goals are to obtain fair wages, full social benefits, reasonable workloads and adequate safety conditions from their employer, Republic Services. Aside from the New Year holiday, workers have been picketing all day, every day in 8 hour shifts, and have received widespread support from the community and local politicians.

Republic Services has thus far refused to meet the basic demands of the workers. They have even brought in scabs from out of town, offering them nearly twice the starting pay for garbage truck drivers plus covering room and board. Striking workers say that the scabs are not being subject to the same shift lengths or harassment from management that they’re used to.

Additionally, Republic Services has sent out daily text messages to striking workers in an attempt to get them to cross the picket line. One reads, “During today’s negotiations, the Company increased our first-year wage offer to a proposed raise of $1.00 per hour. This represents a highly competitive wage in the San Diego market. Unfortunately, the Union chose to disregard current San Diego labor market rates.”

Another particularly egregious, condescending strike-breaking message ends in a similar tone: “The Company will continue to bargain in good faith with the union for a contract we believe makes sense in this market and provides the best chance for long-term job security for all of us, But, please, remember, no customers, means no jobs. That’s just a fact of life.”

Republic Services is primarily owned by Cascade Investment, a private investment firm founded and controlled by Bill Gates. Cascade Investment is the largest farmland owner in the U.S. and has $70 billion in total assets. Are workers really supposed to believe the likes of Bill Gates can’t afford to meet their demands?

Liberation News spoke with several workers on the picket lines off Clairemont Mesa Boulevard. on Jan. 3.

Teamsters 542 business representative Nicole Moreno pointed out that, “We’re not reaching for the moon. We’re just asking for a fair contract. This particular industry has been overlooked for generations…These gentlemen were working during the pandemic. They were considered essential and heroes.”

This sentiment was echoed by Teamster 542 member Alexis Barrera, who said, “We really want to get back to work and clean the city.” He added that Republic Services could be using the money they’re spending on scabs to meet the demands of the workers, so the holdout shouldn’t be blamed on the union.

Teamster 542 member Octavio Cantero told Liberation, “They charge their customers more, yet we don’t see a wage increase.” He noted a racist argument that was used by management to keep wages down: “We’ve heard [them say] since we’re a border town we can’t pay you more. So, does that mean everybody lives in Mexico? Can you even prove that we live in Mexico? Do you send our paychecks to Mexico? Even if we were living in Mexico!”

Republic Services management is running out of time and leverage. The city of San Diego has threatened to take legal action against Republic Services over their contract violations that are a result of a drop in garbage collecting capacity during the strike. This would not be an issue if Republic Services would respect the needs of the workers and meet the union where they are at.

Negotiations between Teamsters 542 and Republic Services management are set to resume and take place on Jan. 4 and 5. When asked how the community can support, another worker said, “We’ll take any support we can get. Help us get the word out. Please join us at the picket line.”

Workers are currently on strike at the following four Republic Services locations: