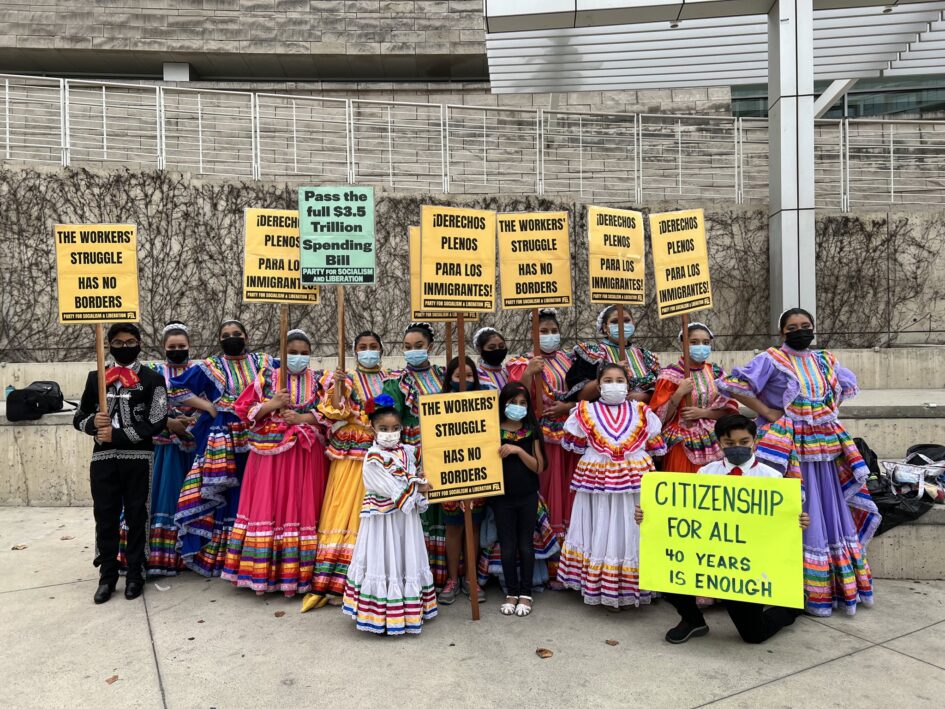 After the removal of a pathway to citizenship for undocumented immigrants in the Biden administration’s budget reconciliation bill, community residents came out on Oct. 23 to march and raise their voices in the Papeles Para Todos Campaign’s national day of action in San Jose, California. With the support of community organizations like Maiz, Showing Up for Racial Justice, and Services, Immigration Rights, and Education Network (SIREN), residents created a space of mutual support.

Speakers shared their personal experiences with the U.S. government’s inhumane immigration system that leads to deportations, family separations and living in fear. But the community also exhibited a spirit of resilience and pride, with dance, music and poetry.

Bay Area Party for Socialism and Liberation members participated in solidarity. Joining a crowd of families, community leaders and organizers, the PSL made a statement saying that “our power will always be with our communities organized.”

The people, immigrant and non-immigrant, want more for immigrant populations. Santa Clara Office of Education Board member Peter Ortiz expressed this when he said, “This country made it through this pandemic on the backs of undocumented labor. It is time for them to get repaid, we need a pathway for citizenship for our brothers and sisters who are undocumented.”

A few days later, on Oct. 28, the PSL participated in another Papeles Para Todos day of action, with a press conference in San Jose and banner drops over freeway overpasses in San Francisco. The actions demanded that Vice President Kamala Harris override the Senate Parliamentarian ruling on excluding the immigrant rights provision from the budget reconciliation bill The banner that were dropped read,”Ignore the Parliamentarian! Citizenship for all!”

So far the Senate Parliamentarian, Elizabeth MacDonough has shot amnesty down twice and right-wing Democrats have slashed the original budget in half. Vice President has the constitutional power to disregard the decision of the Parliamentarian regarding the budget reconciliation process.

Progressives are also demanding amnesty that immigrants be included in the budget reconciliation bill.