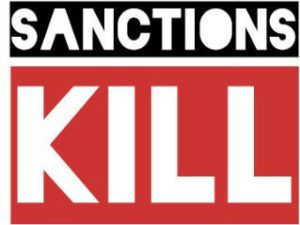 This March 17 statement issued by the Sanctions Kill Campaign links to a petition: solidaritycenter.ourpowerbase.net/civicrm/petition/sign?sid=28&reset=1

The Sanctions Kill Campaign is a broad coalition of social justice, solidarity and peace forces, focused on exposing the devastating impact of U.S. sanctions on civilian populations globally. 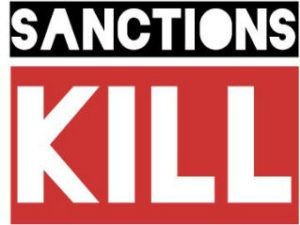 Sanctions are not a substitute for war

The current regime of sanctions against Russia is not a substitute for war but a form of warfare. Sanctions kill many thousands, just as bombs do. Sanctions create hyperinflation, artificial famines, social upheavals and health crises that punish civilian populations. As U.S. President [Joe] Biden said, the sanctions are intended “to inflict further pain.”

Sanctions are collective punishment and illegal under international law.

Nor are the sanctions by the U.S. and its allies against Russia a deterrent to war. They will not reduce hostilities but are an escalation of the current conflict.

Sanctions are being used to consolidate U.S. dominance in the region, even though it is counter to the material interests of the European Union and the Britain to cut economic ties with Moscow.

The growth in EU trade with Russia and China threatens the domination of U.S. corporate power in Europe. The EU is the biggest investor in Russia. While the U.S. is the largest exporter of methane gas, the EU purchases substantial gas from Russia at much lower prices, also oil and wheat.

With the EU and especially Germany unwilling to impose sanctions, which would break all relations with Russia, Biden threatened the U.S. allies that the only alternative to sanctions . . . would be nuclear war. The U.S. president said: “You have two options. Start a Third World War. . . . Or two, make sure that the country that acts so contrary to international law ends up paying a price.” Biden said the U.S. “goal from the very beginning” was to keep NATO and the EU “on the same page.”

Using the dominant role of the dollar in the world economy, Washington has unilaterally imposed over 5,500 sanctions on Russia, making it the most sanctioned target of U.S. aggressive policies.

U.S. sanctions drag the whole world into the conflict

Unfortunately, Russia is not the only victim of these unilateral coercive measures. Over 40 countries, comprising a third of humanity, are so targeted by the U.S. These include Cuba, Venezuela, Nicaragua, China, Iran, Iraq, Syria, Palestine, Afghanistan, Zimbabwe, Ethiopia and Sudan. Third countries trading with targets of U.S. sanctions face heavy fines. This deadly form of economic warfare destroys regional development.

Further, the U.S. is compelling other countries to execute these extreme economic penalties. We note, with grave concern, that these sanctions imposed on Russia are dragging the whole world into a conflict which has a high potential of spiraling out of control.

The United Nations did not approve the U.S.-instigated sanctions. Many countries now refuse to join with the U.S./EU sanctions imposed on Russia. To date India, Pakistan, Indonesia, South Africa, Turkey, United Arab Emirates, Saudi Arabia, Brazil, Argentina, Mexico and other countries with smaller economies have refused to comply with the U.S. measures. In fact, almost all of Latin America, the Caribbean and Africa, and most of Asia reject the sanctions.

Sanctions are a crime against humanity

Such sanctions would damage these countries’ own trade relations. Supply chain disruptions and inflationary pressures from the U.S.-led sanctions are already disproportionately impacting poor and working people globally due to shortages and higher prices for food, fuel and basic commodities. Especially impacted are people in the developing world.

As over 60 years of U.S. sanctions against the Cuban Revolution prove, sanctions meant to achieve the regime change the U.S. wants to impose have, in fact, resulted in raining misery upon the targeted people. These sanctions serve as a cautionary lesson to any nation that wishes to exercise its sovereignty under the globally inflicted “Pax Americana.” Sanctions are a crime against humanity.

This devastating war started with the U.S.-orchestrated coup in 2014, overthrowing the democratically elected government in Ukraine. Although Ukraine is not a formal NATO member, the U.S. has since dumped mountains of lethal arms and deployed U.S. military “advisers” into Ukraine.

Ukraine is a pawn in Washington’s strategy against Russia. Since the coup, Ukraine has been reduced to the poorest country in Europe with the highest rate of migration. Kiev’s continuing aggression against its eastern provinces and mass privatizations of socially owned property have furthered the economic ruin.

The Sanctions Kill Campaign calls on all sides to end hostilities and for the U.S. to employ diplomacy — not weapons, sanctions and war!

No war! no sanctions! no nato!

Baltimore Protest: No War on Russia, No Sanctions, No…

U.S. sanctions: an act of war against workers

No sanctions, no nukes, no war!

Theses About the War in Ukraine—Marxist Tendency, Ukraine