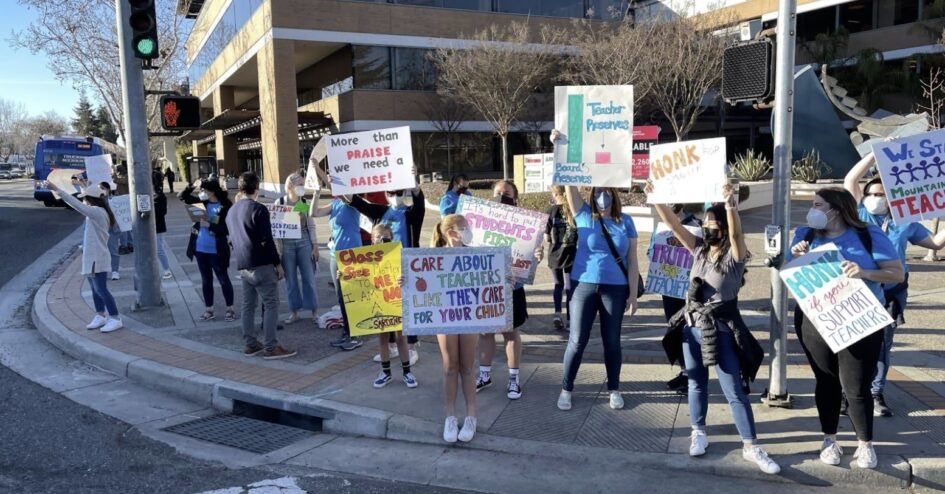 Students, parents, and educators gathered at the corner of Castro Street and El Camino Real in Mountain View to express their support with the Mountain View Educators Association, as Whisman school district teachers continue to demand a just contract.

MVEA has been advocating for the well-being of their students as well as educators throughout their contract negotiations with the district since early October of last year. After over three months, MVEA declared an impasse on Jan. 18, following the district’s unwillingness to meet the demands of the educators. Their demands are simple and are aimed at securing a more nurturing environment for both teachers and students alike: a reduction in class sizes to accommodate student demands exacerbated during the pandemic, reduction in staff meetings to 1-2 per month to allow teachers equal planning time to implement engaging lessons for students, more yard duty supervisors to increase student safety, addressing the substitute shortage, setting a defined work day for teachers, and compensation for work outside of working hours such as Individualized Education Program (IEP) meetings and other after school responsibilities.

Rather than supporting the well-being of teachers and students, the Whisman school district opted to turn down their demands. Demands aiming to better address the heightened student need for quality instruction, such as a reduction in class size to allocate more resources for student achievement, were outright rejected. Demands aiming to secure a more just compensation for educators were supplanted with counter-offers that severely underestimate the needs and the current reality of the cost of living in Mountain View. As of 2022, the cost of living index in Mountain View is estimated to be 315.4, which exceeds the national average of 100. To put this into perspective, the average cost of rent for a 1 bedroom apartment in Mountain View is 2.5 times the national average. These statistics highlight the colossal hurdle that Mountain View educators must overcome while simultaneously meeting the demands of teaching during a pandemic.

Katie Puglisi-Chan, mother of two students at Gabriela Mistral Elementary School, spoke up at Thursday’s rally to show solidarity with teachers. Puglisi-Chan said she is deeply grateful for the effort teachers have been making to help kids catch up after the disruptions caused by the pandemic, but said that their current workload is not sustainable.

“Being a teacher requires tremendous patience and care,” Puglisi-Chan said. “Doing that depleted is just an impossible ask – and yet they do it, day in and day out.” Puglisi-Chan spoke in support of the union’s demands, and urged the district to meet them. “Addressing the things they’re asking for will make the important work they do sustainable,” Puglisi-Chan added.

Originally, educators were demanding a 5 percent salary increase and a 3 percent one-time payment. The district only offered a 4 percent increase and rejected the remaining demands. “We have 7 percent inflation and you’re offering us 4 percent,” stated union President Sean Dechter. “As far as I see it, we didn’t gain anything this year.”

According to MVEA’s study on the school district’s retention and budget, the minimum yearly salary for a first-year teacher at Mountain View Whisman School District is approximately $68,535 – which ranks 7th out of 9 in comparison to similarly-funded nearby school districts. Comparing teachers’ maximum salary rates, the gap grows even larger with MVWSD teachers falling to 8th place and with teachers making nearly 20 percent less than the top paying district. Lastly MVWSD is in 9th place with the lowest hourly rate – and the District’s recent offer would only raise it to tie with the 8th lowest hourly rate.

In Santa Clara County an individual yearly salary of $82,450 is categorized as low income. These facts paired with the current 7 percent inflation rate highlighted by union president Sean Dechter expose the dire situation that teachers at MVWSD are currently facing.

Economic instability, paired with a work environment that foments burnout, inevitably leads to high turnover. MVWSD boasts the highest turnover rate in the county at approximately 20 percent, according to the union’s report. High attrition rates are particularly concerning because they cultivate an unstable and unpredictable learning environment for students. In a moment in which students are already experiencing incalculable amounts of learning loss, trauma, and anxiety, it is outrageous that MVWSD is failing to address the need for more supportive teaching conditions.

Funding is not the problem – MVWSD had the largest budget this year in fact. The problem is priorities. The district is failing to prioritize their educators and students, all while ignoring their high turnover rates which are the consequences of their own actions. In a city that is home to tech industry giants like Google, it is an outrage that its teachers are forced to accept unfair compensation and exhausting work conditions.

The struggle continues as MVEA prepares for another negotiation with another rally taking place Mar. 10 during the next district board meeting at 5:30 p.m.