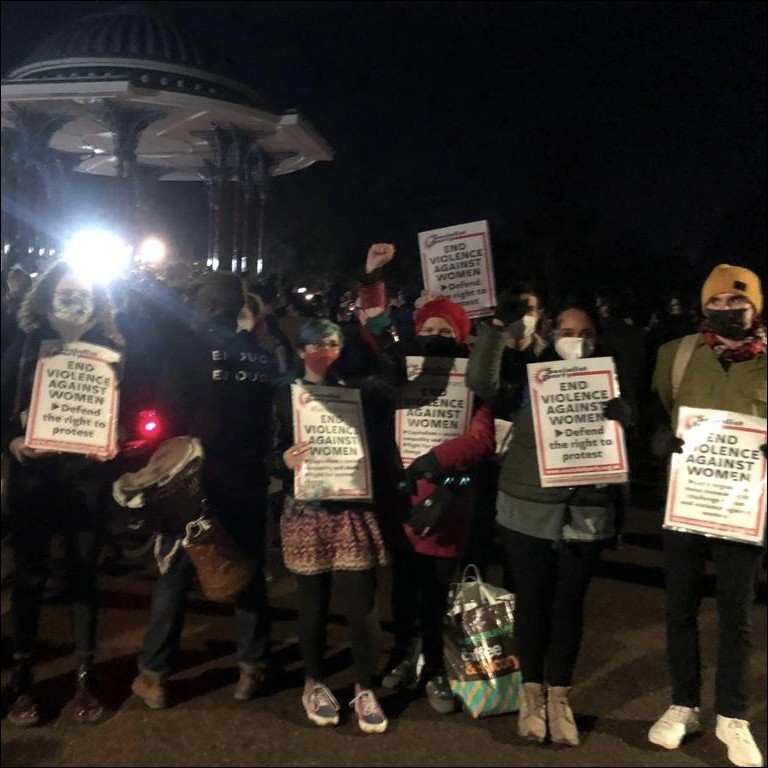 From The Socialist newspaper, 6 October 2021

For democratic control of the police The horrific and brutal details surrounding the abduction, rape and murder of Sarah Everard were made known to the public on 29 September as the sentencing against her murderer, Met police officer Wayne Couzens, began. Couzens abused his power as a police officer to falsely arrest Sarah Everard as she walked home, citing she had broken Covid restrictions. The premeditated murder has once again brought into question women’s safety and the accountability of the police.

The fact that Sarah was tricked by a police officer under the guise of the law has made many women ask: how can we be safe when the very people we are told will protect us can do this? In response, the Met police has released ‘advice’ to women suggesting that if they find themselves in a similar position to Sarah, then they should do things such as ‘dial 999’ and ‘wave down a bus’. This is rich considering directly after Sarah’s murder, the Tory government was suggesting using undercover officers in nightclubs and other places to help ‘protect’ women – now women have been advised how to escape them!

Over decades the Met has enabled undercover police officers to trick women into sexual relationships in order to spy on left-wing groups. On the same day as Couzens’ life sentencing for Sarah’s murder, activist Kate Wilson, who was deceived by an undercover police officer, won a tribunal against the Met police for its abuse of her human rights (see below).

While the Tories talk about how murders like Sarah’s should never happen again, their actions speak otherwise. They push through legislation such as the Spycops bill which would give police more power, and help protect officers from charges of rape. This is the same bill that in October 2020 Kier Starmer did not oppose, but rather told Labour MPs to abstain on.

Additionally, cuts to public services have had a massive effect on the safety of women. Street lighting, which many councils – both blue and red – have dimmed to cut costs, is just one example of how women’s safety has been impacted in the name of austerity. These cuts should be reversed, and the services fully funded to ensure the safety of all women.

The misogyny and sexism in the police does not stop at Couzens or a few bad apples. Another Met police officer from Couzens’ unit was charged with rape, and a WhatsApp group where police officers shared sexist and pornographic material is being investigated. 26 police colleagues of Couzens have committed sex crimes since 2016, and more than 750 Met police employees have faced sexual misconduct investigations since 2010!

Women and the working class should no longer accept the lack of accountability of the police, instead we should demand the democratic community and trade union control and oversight of policing as well as the criminal justice system. There should be independent workers’ and community inquiries into police misconduct. Couzens’ crimes did not occur out of the blue, so why were the warning flags ignored?

The culture in the police reflects that of society as a whole. The levels of harassment, violence and abuse that women face are systemic. Women should not be told to change their behaviour, but society should be fundamentally changed to end the inequalities embedded in capitalism which perpetuate sexism and abuse.

On 30 September, the Investigatory Powers Tribunal handed down its ruling in Kate Wilson’s epic ten-year legal battle over the use of undercover police against protest movements. The groundbreaking ruling identified a “formidable list” of breaches of fundamental human rights by the Metropolitan Police.

The case was part of the battle for justice by Kate and other women, following revelations that they had been deceived into relationships by undercover police. Having exhausted other routes, she took her fight for answers to the secretive Investigatory Powers Tribunal.

The tribunal found that police took steps to interfere with Ms Wilson’s political rights to hold opinions and with her rights to freedom of expression and association, as well as violating her right to a private and family life.

It ruled that the right to hold opinions and exchange information and ideas must include the right to do so without attracting the attention of the police and being monitored and placed under surveillance. In this case, it concluded, the claimant’s political views were the reason she was subject to surveillance.

Kate Wilson said: “The events in my case happened years ago, however the failure of the police to protect women from sexual predators within their own ranks, and police attempts to criminalise protestors are both still very live issues today. The Tribunal has gone some way towards recognising how deep the abuses run. We need to tackle the misogyny and institutional sexism of the police, and there needs to be a fundamental rethink of the powers they are given for the policing of demonstrations and the surveillance of those who take part.”

Railway bosses cook the books in another capitalist market failure

Unite health members say no to 3% and vote for action

Fighting for our future

Youth Fight for Jobs – why we’re marching on 9 October

Ten years since our 330-mile Jarrow March for Jobs

We have the right to breathe fresh air

Caffeine and capitalism – a symbiotic relationship