‘Save our children’ − from bigotry and hatred! – a WW commentary 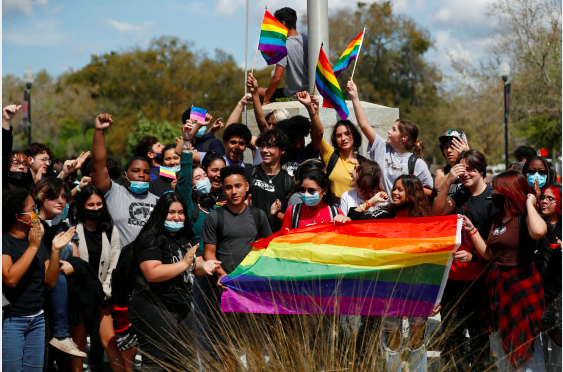 Right-wing forces are generating legalized hatred and bigotry in the U.S. under the banner of “Save Our Children!”

In Texas, parents arranging medical and mental health support for their trans children can now be prosecuted as “child abusers.” In Florida, teachers and school systems with a curriculum of LGBTQ+ sexuality and gender issues can be sued by parents under a “Don’t Say Gay” state law. In Idaho, a pending bill would sentence medical professionals to life in prison, if found “guilty” of providing gender-affirming care to youth.

In the first months of 2022, over 151 pieces of state legislation were introduced to restrict health care or access to athletics to trans youth, permit “religious” organizations to discriminate against LGBTQ+ adoptive or foster parents and ban LGBTQ+ curriculum and books in public schools. (tinyurl.com/yj695jc9)

An anti-LGBTQ+ “Save Our Children” campaign in Florida in 1977 — fronted by Anita Bryant, a Miss America pageant runner-up — aimed to fire all gay teachers in the state on the grounds they were “child abusers.” That vile lie was just resuscitated by Florida’s gubernatorial press secretary, tweeting that opponents to “Don’t Say Gay” were “probably groomers” — trying to lure children into sex. (tinyurl.com/vu5b83ax)

These right-wing bigots — shouting “Save the Babies!” — have fought tooth and nail to deny reproductive rights to childbearing people since the 1973 Roe v. Wade decision by the Supreme Court. They have physically threatened people at clinics, bombed medical facilities and murdered doctors and clinic escorts. They have mounted a war on reproductive rights for 50 years.

Result? A vicious SCOTUS decision last December favorable to Texas Senate Bill 8 banning abortions after the sixth week of pregnancy — no exceptions for rape and incest. The war on women and people who desire to terminate a pregnancy will have murderous results. The Guttmacher Institute estimates that, before Roe, one-sixth of all pregnancy-related deaths were caused by illegal abortions. (Workers World, Oct. 15, 2021)

Look at the actual voting records of those shouting “Save Our Children.” They reject progressive agendas to get food, shelter, education or any meaningful support to the most vulnerable families. The heaviest burdens fall on children of color and those from low-income families, often trapped in a school-to-for-profit-prison pipeline and condemned by racism to a life struggling against an “injustice system.”

Using “the children” to excuse and justify oppression is the most disgusting hypocrisy of a culture war created by the right-wing.

Indigenous peoples had their children stolen from them in the name of white-supremacist “civilization.” Genocidal U.S. wars on Native nations showed no mercy to the women, gender-nonconforming people or children, whom soldiers slaughtered.

Women of African tribes and nations kidnapped into enslavement in the U.S. were deliberately raped into pregnancy for children whom owners could sell away from them for profit.

The same right-wing forces are attempting to wipe out the history of racist injustice, by sponsoring anti-Critical Race Theory laws, and shut down progressive curricula in public schools.

This amounts to a ban on histories of resistance by people against white-supremacist, woman-hating, anti-LGBTQ+ repression and more. 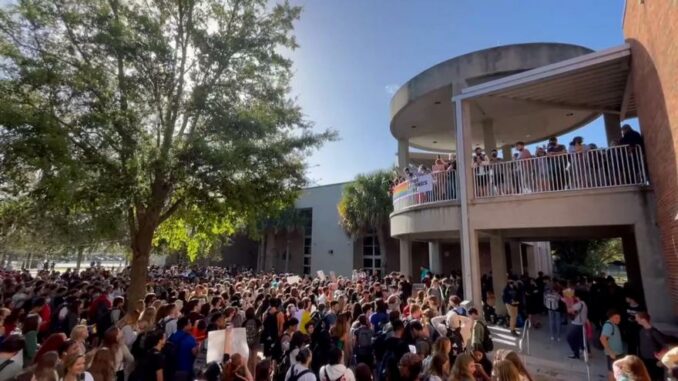 Fighting for their lives

Young people are fighting back, and they need stories of resistance to help win against the right-wing onslaught. The bigots are afraid that young people will discover the resistance of the past — and act on it!

Coco Gauff, the talented African American tennis player and a Florida native, spoke out against the “Don’t Say Gay” bill, saying: “I think it was in 2019 or 2020, when I talked about the Black Lives Matter movement — I said it was important to have those conversations. Same stance on this. I think it’s important to have those tough conversations; and from the people that I spoke to who are part of the community, it definitely makes a difference when you don’t have to hide who you are.” (ESPN, March 10)

We call for histories of resistance to oppression to be part of public education. We call for the right of people to have self-autonomy with their own bodies — queer bodies, young bodies, disabled bodies, people of color bodies, childbearing bodies and bodies that choose not to bear children. We call for people to have collective determination as workers over their conditions of education, work and governance.

In Florida thousands of high school students walked out against the infamous bill, shouting “We Say Gay!’ and waving Pride flags. STRIVE (Socialist Trans Initiative) of Florida said in “GAY IS HERE TO STAY!”:

“The ‘Don’t Say Gay’ bill is just the latest of the Florida GOP’s attempts on the lives of queer and trans kids’ lives. That’s what this is: a slow, painful and torturous attempt at killing off queer and trans kids. STRIVE condemns this bill and the many representatives and senators who passed it. The day will come where they will be made to answer for it. We must fight for that day to arrive. Love and solidarity with all queer and trans youth: They are terrified of y’all. Give them more reasons to be afraid.” (facebook.com/socialisttransinitiative)

Young people are fighting for their future. We must all be in this struggle with them.

In 1975 as a lesbian, Pratt lost custody of her young sons, ages 5 and 6, under the anti-LGBTQ+ “crime against nature” laws that were on the books in the U.S. until the Lawrence v. Texas decision by the Supreme Court in 2003.

SWP: ‘Combat Jew-hatred wherever it raises its head’

Save Lives – Save Money – Safe Consumption

Save libraries, save the world

The Washington Post Publishes a Commentary Full of Lies Against Putin

Fighting for voting rights and workers’ rights – a WW commentary