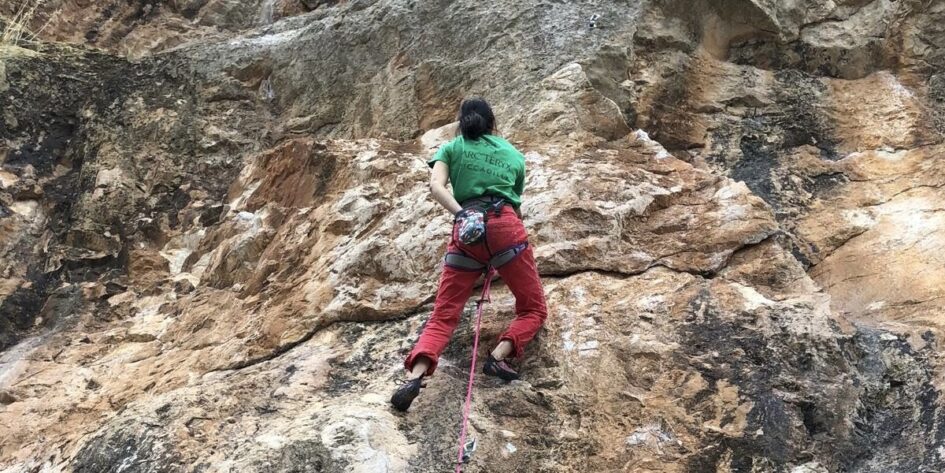 Just over ten years ago, my mother stepped foot in a climbing centre for the first time. The overwhelming friendliness of the counter staff towards my mother, dressed in her head to toe hijab with her two kids, hooked us onto the sport. This refreshing mentality, which welcomed a visibly Muslim, south Asian family into a predominantly white sport, has kept us coming back ever since. For the last decade we have disappeared into our local London wall tucked away besides the canal more times than I can count. I look back fondly at our youth climbing squad barbeques in which the coaches went out of their way to cater for my brother and I with halal meat.

Is this sentiment reflected across the whole of the UK? In my experience, mostly. Of course, you still get the odd racist – like the old white man who, a few years ago, asked my rather confused aunt if she was there ‘to blow up the rock’ on her first climbing trip to Portland crag in Dorset. On the whole though, the climbing community is one of the most inviting sporting cultures out there, and the London community is especially welcoming. But as the celebrations of South Asian Heritage Month overlapped with the explosion of climbing into this year’s Olympic Games, I felt the lack of BAME climbers become starkly evident.

Where are the brown girls?

What is to blame for this disparity? Is it demographic differences which render BAME people more likely to live in inner city areas with limited access to the outdoors? Or is it the lack of visible BAME women climbers? Perhaps the answer is both, and more besides. Another factor dawned on me recently when, about to embark on my gold Duke of Edinburgh adventure, I walked into an outdoor clothing shop to purchase the ‘must-have’ expedition kit, the reality of this sport’s expense. With the price of climbing shoes, rope, crash mats, chalk, cams, harnesses and quickdraws, it’s no wonder that this lifestyle remains out of reach for many. The outdoors has become a haven for those who can afford it.

There are also very real cultural barriers within South Asian communities themselves which must be addressed. Though improving, the ‘girls must stay home’ mindset is unfortunately still alive and kicking and partly explains why Asian women are the group least likely to be physically active in England. I myself have been urged to quit climbing countless times by certain males in my extended family. This self-destructive mentality can be healed, however, starting with those uncomfortable dinner table conversations.

On a recent episode of Women’s Hour, Shaheen Kasmani, who runs Muslim Girls Fence, and Mara Hafezi, the Sports Co-Lead for South Asian Heritage Month, discussed the issue of self-consciousness. As they noted, the courage needed to take climbing further, especially if first encountering the sport as part of a climbing outreach and participation programme, can’t be underestimated. Faced with training facilities of seasoned athletes, power screams, and a lot of shirtless climbing, feelings of intimidation are understandable and valid.

While my own feelings of self-consciousness have thankfully died away (I’m just there for a good climb!), many sports-people like me still face a tension. We desire validation of our climbing experience because of our strength and skill, but the reality is that strong brown female climbers attract attention firstly because of appearances and secondly for athletic ability.

The pitfalls of mainstream sport

The explosion of climbing walls all over London and beyond, and the inclusion of climbing into the Olympics for the first time, is certainly exciting news. Though a springboard for climbing to become more visible and accessible, there’s a current reluctance to fully engage with this newfound media spotlight. Why? Because a critical part of the sport’s appeal has always been its niche, undisturbed calm. As such, some have only grudgingly accepted the Olympic spotlight, and others not at all. For example, the Olympic format has angered some climbers because it combines three different disciplines; boulder, lead and speed. This is equivocal to expecting track athletes to excel in both long and short races, without opportunities for athletic specialisation.

The heightened attention on mainstream sport is another worry. The recent hype of the Euros and the possibility that ‘it’s coming home’, has brought the dark side of mainstream sporting culture to the fore – idle flag-waving, rampant racism and the ‘British if they win, immigrants if they lose’ mentality. Concern for ‘fans’ over competitors also prompted the Norwegian women’s beach handball team be fined for playing in shorts, not bikini bottoms, at the Olympics.

The desire to cover a few more inches of flesh being blacklisted on the international sporting stage reveals how female athletic uniforms are generally over-regulated. As someone who has climbed comfortably in a t-shirt and joggers for the past decade, the handball decision was dispiriting and demoralizing. With such intolerance on display at the very top, it is no wonder that some women are repelled from sport in general – especially those from a culture in which t-shirts are preferred over sports bras.

Back to the wall

Although the presence of brown girls in climbing, and in sport in general, is rarer than it should be, my own experience has taught me that tolerance and amiability can go a long way. It is the reason my family stayed for the taster session that first day at the climbing centre, and why we have embraced this incredible lifestyle both indoors and out, ever since. Fittingly, I now work on the centre’s front desk, in the very same position as those who welcomed me when I was young.

While there are undoubtedly bleak sides to any sporting culture, these conversations must continue. And eventually, the assumption that a hijab- or turban-wearing teen, or a black kid, or anyone visibly different is a complete beginner, or doesn’t know what they’re doing, will dissipate. Though I’ve always struggled with wanting to detach my identity from my climbing ability I’ve come to realise that maybe our differences do need to be highlighted, in order to show that our differences truly don’t matter. It’s just about the climb.

Hannah Zia is a student, freelance writer and competitive climber from east London