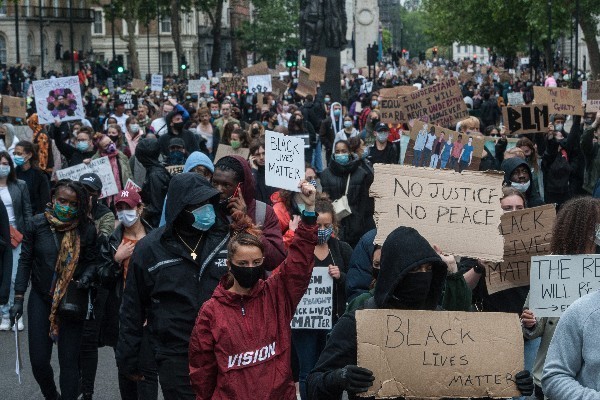 The issues raised in 2020 by the Black Liver Matter movement have not gone away (Pic: Guy Smallman)

Black and Gypsy, Roma and Traveller (GRT) girls experience some of the highest rates of exclusion from English schools.

Data uncovered by Agenda, an alliance of more than 50 charities, found that during the 2019-2020 academic year GRT girls faced rates of permanent exclusion four times higher than their white classmates.

Black Caribbean girls were permanently excluded from school at double the rate of white British girls.

Although boys still suffer the highest overall expulsion rates, these shocking statistics show that the number of girls permanently excluded rose by 66 percent over the last five years.

Laila was permanently excluded from school when she was 14. Now aged 19, she told Agenda how sexual abuse and racism played a fundamental role in her exclusion.

She said, “I experienced a lot of racism both at school and out of school. I was never afraid to call it out—if that was from teachers or other students.

“I was excluded for throwing flour on someone else who was racist to me. So, flour on their clothes, on their uniform, is more important than them telling me that I deserve something horrible because I’m black?”

Marie explained how a sexual image was shared without her consent when she was a pupil.

“That was just like the start of the hell”, she told Agenda. “From there, I got excluded a few times, just for little things, like setting off the alarm and bunking and stuff like that.

“I just felt like I gained a stereotype. Like “loud, black girl”, and that really is not tolerated.

Exclusions are a product of a broken education system obsessed with exams and directed towards a single model of “success”.

Teachers are under immense pressure to teach the national curriculum, impose national testing and compete on school league tables. This creates a motive to exclude students whose exam results may lower a school’s average performance.

Jemima Olchawski, CEO of Agenda said, “The pandemic has been really tough for many girls and young women.

“We know this is the group most likely to be struggling with their mental health and also that violence against women and girls increased significantly during lockdown.

“Now those girls are returning to the classroom, we should be asking, where is the support that recognises and responds to what they’ve been through?

“It’s a real concern that the government’s emphasis on behaviour management and discipline could see more girls facing exclusion, when what they really need is more support.”

Read the Agenda report here Drive2Survive is a GRT campaigning organisation challenging the police bill and the eradication of GRT cultures. For its events at the Tory party conference go here