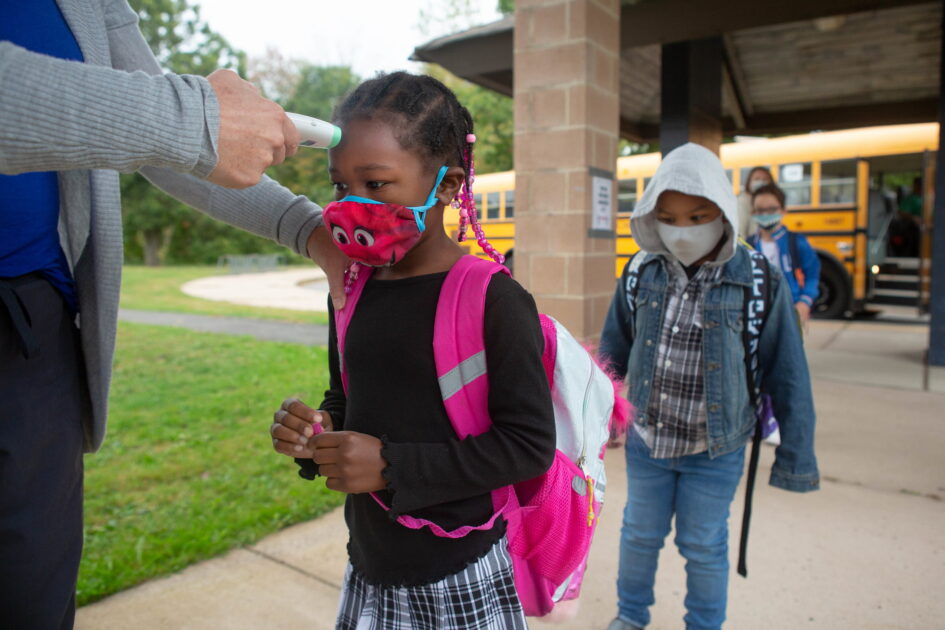 The Delta variant of COVID-19 is running rampant across the country. It is now the dominant form of the virus in the US and appears to be significantly more contagious than the original strain and previous variants. Though the majority of new cases involve unvaccinated individuals, breakthrough infections are on the rise, even among highly vaccinated populations. Israel, for example, achieved vaccination of 78% of the eligible population. But after relaxing restrictions, a surge of the Delta variant hit, resulting in 7,500 new cases a day, one of the highest totals in the world.

To end the pandemic, rapid vaccination of the overwhelming majority of humanity is absolutely necessary, along with other measures such as wearing masks, proper ventilation in buildings, contact tracing, and expanded healthcare, educational facilities, and staff. But the profit motive has inhibited the aim of full vaccination at each step of the way. Defense of intellectual property rights and “vaccine nationalism”—whereby rich countries hoarded their supplies of vaccines, laying the basis for eventual viral mutations, especially in countries where vaccination rates are much lower—are just two examples.

Compounding the problem, the widespread erosion of confidence in the institutions of capitalist society has caused vaccine hesitancy among significant layers of the population, further inhibiting efforts to fight the pandemic. Over a year and a half into the pandemic, many governments are callously urging workers to live with the “new normal,” unfazed at the prospect of sacrificing human lives for the sake of the economy.

It is in this context that students and teachers across the US are returning to in-person classes for the 2021–22 school year. For the wellbeing of teachers, parents, and students, a safe return to in-person learning is desperately needed. But the capitalist government’s track record for managing the virus in schools gives no indication that the transition will be completed responsibly.

Even before the pandemic, students and teachers alike were forced to deal with underfunding and decaying educational infrastructure. In many parts of the country, students are crammed into antiquated buildings without air conditioning or proper heating. Air and water quality can be dubious, and even before the pandemic, some 19,000 schools servicing 11.6 million children did not have access to an internet connection that could support digital learning. These factors had been accumulating for decades, but the onset of the pandemic exposed the rot—and class fault lines—of the educational system.

Due to the government’s mishandling of COVID-19, the 2020–21 school year was marked by dramatic shifts and inconsistencies across the country. School districts implemented a variety of educational models, ranging from completely remote learning, to fully in-person classes, to hybrid models in between. Many districts attempted some combination of the three, often making multiple changes within a year, with little guidance for staff or students. The administrations’ tacit expectation was that teachers would pick up the slack and somehow seamlessly construct and convert lesson plans to work effectively in those vastly different modes of learning.

When the inevitable return to in-person classes began last fall, hardly any consideration was given to the safety of staff and students. Proper ventilation was absent in many schools, which in turn tried to skirt the issue by leaving windows open throughout the winter. CDC recommendations for social distancing were ignored when inconvenient, mask mandates were inconsistently enforced, and contact tracing efforts in many schools were insufficiently robust for the complexity of a student body.

The increased pressure, not to mention concerns over safety, caused an exodus of teachers and support staff, further burdening the remaining workers. The erratic shifts in learning models and colossal strain put on teachers only further disrupted student learning already impacted by school closures, poorly implemented remote learning, and anxiety over the health and safety of loved ones that many students faced.

Meanwhile, in areas where in-person learning was not pursued, millions of students suffered from the traumatic downsides of remote learning, namely severe social isolation, and decreased knowledge retention. In households where parents and students were simultaneously confined to working and learning from home, parents either had to deal with the extreme difficulty of parenting throughout the workday, or were simply unable to work at all.

How not to reopen schools

Previous experience shows that, provided schools implement rigorous and multifaceted measures to curb the spread of the virus, safe reopenings are possible. However, the current push to return to in-person learning is dictated above all by the capitalists’ desire to finish reopening the economy. Even Vermont, which was a model for safe school reopenings last fall, is backing down from the approach that allowed for success, hiding behind high vaccination rates despite clear evidence in places such as Florida and Israel that other measures are needed.

Infection rates among young people have risen sharply in the past few weeks. A recent study proved that unvaccinated teachers can infect students, who can in turn transmit the virus to their families. While it is not yet known whether the Delta variant is more contagious or deadly among young people than previous strains, the initial data should at the very least result in a huge boost of caution around reopening plans. This has clearly not been the case.

From August 5 to August 12 more than 121,000 child COVID-19 cases were reported among children. School districts in Arizona, Georgia, Indiana, Iowa, Kentucky, Mississippi, New Mexico, Oklahoma, South Carolina, and Texas have all been forced to close due to COVID-19 outbreaks, spread, and resulting quarantines.

With the pandemic already taking a toll on school-age children, the Biden administration continues to echo CDC recommendations to use multiple prevention strategies in order to mitigate transmission of the virus. These recommendations may appear sufficient on paper—but how they are put into practice is a completely different story.

Writing on reopening plans across the country, the New York Times concluded:

Many states have urged localities to return to in-person schooling while promoting policies that conflict with the goal of educating young people in safety. For example, as of this month, nearly one-fourth of the states had banned COVID-19 vaccination requirements, hamstringing localities that want to prioritize student safety. As of early August, only 29 states had recommended that students wear masks—down from the 44 states that did so last fall—and nine states had banned masking requirements.

While many of the states in question are dominated by Republicans, Democratic politicians are also guilty of negligence, with states such as New York, Minnesota, and Vermont currently not mandating mask-wearing in schools. Likewise, Democratic Mayor Bill de Blasio of New York City has unveiled the city’s reopening plans, involving, scandalously, a plan to reduce the school system’s COVID-19 testing program—in the midst of a nationwide increase in cases.

Notably, the CDC guidelines recommend that counties with 50 or more new cases per 100,000 and 8% or greater transmission rate in the community implement hybrid learning models. The CDC recommends that counties with 100 new cases per 100,000 and 10% or greater transmission rates implement hybrid learning models for elementary school and full remote for middle and high school. These categories encompass many counties, including large sections of the Southeast. Despite this, the push for full in-person learning in many of those areas continues, pointing to the economic motivation and capitalism’s disregard for science-based public health measures.

Only the working class can ensure a safe reopening

Last year some teachers’ unions resisted the push for unsafe reopenings. When the Chicago Teachers’ Union held an emergency meeting to call a strike vote, the plans to force teachers and students into dangerous conditions were called off. Teachers in Andover, Philadelphia, and other parts of the country also successfully resisted attempts to force teachers into unsafe buildings. The teachers’ strikes of 2018 showed workers that if they organize and fight back, they can win.

Despite this, the AFT and the NEA have merely fallen in line behind Biden’s policies. After decades of attacks on educational staff and students, this policy of class collaboration has proven to be a dead end. What is needed instead is bold and decisive class-independent action. Reopening the schools must be guided in the interest of public health, not the capitalists’ profits, and will require the efforts of the entire working class.

A safe return to in-person learning can only be guaranteed if schools are operated under the democratic control of teachers and school staff. Teachers and staff should enforce full compliance with mask-wearing, and the highest-quality masks must be provided to teachers, staff, and students at no cost. With genuine workers’ control we could ensure meaningful social distancing by limiting class sizes to 15 or even 10 pupils and effective ventilation systems. In addition, a minimum of one nurse must be provided for every 750 students to maintain health and safety and ensure effective contact tracing.

Whenever necessary, an immediate transition to remote learning must be implemented, with time off at full pay for all those quarantined—including all adults living in the exposed students’ households. More broadly, the unions must educate their members and the public at large in the effectiveness of the vaccines and the science behind them. Vaccines should be administered on demand for free at the workplace, overseen by the health professionals and the labor movement, independently of the capitalist state.

Given the scale of the problem, it is evident that even workers’ control within this or that school would be wholly insufficient. Far wider policy changes and shifts in social priorities are needed. Society as a whole must be retooled in the interests of the working class, and to fight for this, workers need class-independent political representation.

Embedded as we are in every working-class community in the country, teachers, staff, and our unions have an essential role to play in the fight for a mass working-class party 100% independent of the Democrats and Republicans. Such a party would fight to ensure access to quality education for all by eliminating means testing and privatization in the classroom. Its program would include massive funding to update educational infrastructure, while providing teachers and students with the tools and technology they need to effectively teach and learn. It would fight for higher wages for all teachers and staff, and for democratic workers’ control over the workplace. Working directly with educators, it would fight to revamp curricula and classrooms to address all students’ educational needs. All of this would transform schools from glorified child warehouses or factories for churning out workers into essential nodes for genuine learning, social, and emotional support.

The money for all of this exists—650 American billionaires saw their wealth increase by $1.2 trillion in just the first year of the pandemic. If the capitalist politicians refuse to guarantee the safe opening and management of schools, teachers must be prepared to link up with fellow workers and strike for our lives and those of the children entrusted to us. Ultimately, we need a workers’ government and democratic workers’ control over the education system to permanently address the needs of all teachers and students.