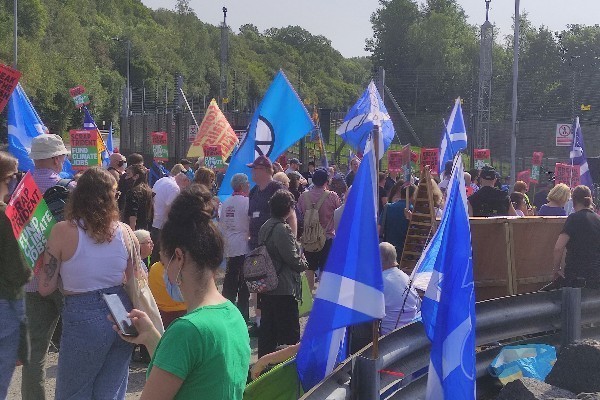 The Scottish independence movement is returning to the streets in a renewed push to achieve a referendum on breaking up the British state.

Marches are set for Stirling on 11 September and Edinburgh on 25 September.

These will be the first marches called by the All Under One Banner (AUOB) independence campaign since January 2020.

In the run-up to these mobilisations, activists have held static events.

Last Saturday about 200 people joined a rally for independence and for a nuclear-free Scotland organised by AUOB at the Faslane nuclear weapons base. This is the site of Britain’s Trident missile programme.

The rally was supported by the Scottish Campaign for Nuclear Disarmament (CND) and the SNP CND group among others. It represented a shift for AUOB which normally organises marches and rallies only on the question of independence.

Speakers highlighted what the £205 billion to be spent on Trident could be used for. Some highlighted funding the NHS or building council housing.

Others pointed out the hypocrisy of the Tory government claiming that it doesn’t have money to welcome Afghan refugees while it clearly has money for the weapons used in wars that make people refugees.

Lorna McKinnon, from the Socialist Workers Party, said at the rally, “That’s why it’s so important that we’re all here today. Because what a blow it would be to the Tories and their system if we broke up the British state with independence and started building a society that puts people before profit and war.”

The rally was younger than most independence events organised during the pandemic. The issue of Trident and the fact the rally wasn’t just about independence motivated some young people to travel to Faslane.

Lorna added, “In a world that’s so deeply in crisis, we can’t just postpone these struggles until after independence—because it’s not inevitable that independence will make a better society.”

Then on Tuesday, around 120 people joined a demonstration called by the Now Scotland campaign group at the Edinburgh parliament building.

It was organised to coincide with the return of the parliament and to demand that the new SNP-Green Party government steps up plans for a new referendum.

Speakers talked of their frustration at the Scottish government and the need to make another independence referendum a priority. Former SNP MP George Kerevan spoke of the danger of working class people who backed Yes in 2014 becoming disillusioned if the SNP doesn’t push for independence.

Socialist activist Donny Gluckstein said Scottish independence could strike a blow to British imperialism in the wake of the disaster in Afghanistan. He added that the battle against climate change is crucial in the fight for independence with Cop26 talks happening in Glasgow in November.

The SNP and the Greens have spoken about a new referendum within the lifetime of this parliament. But there is no real strategy to take the issue forward in face of the Tories’ refusal to grant a vote.

Militant mass mobilisation, more confrontational than has taken place so far, can challenge the Tories and pressure the Scottish government.

For details of the Stirling and Edinburgh marches go here