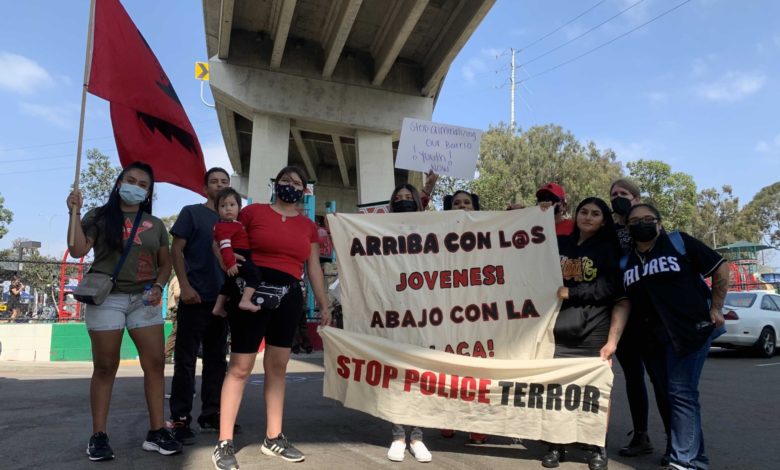 On August 21 the Brown Berets de Aztlán organized a march at Chicano Park demanding justice and accountability for neglect by the San Diego Police Department, which contributed to the deaths of two Latino youth. Liberation News is omitting their names at the request of the family. The march was attended by Unión del Barrio, San Diego Drumline, the Party for Socialism and Liberation and members of the Barrio Logan community.

On the night of July 19 at Chicano Park, police responded to what they called a “possible shooting.” According to the family, someone called 911 requesting an ambulance and medical assistance. The police showed up to the scene with several units in full riot gear.

Police then prevented the immediate medical assistance needed for the wounded teenage Latinos by delaying the ambulance for more than 40 minutes. A crowd of community members gathered around the scene demanding fair treatment for the victims. They were met with riot police, tear gas and rubber bullets.

The march on August 21 began with opening speeches at Chicano Park. Participants then marched from Chicano Park towards the police station in Logan Heights. Throughout the march people were chanting “Esta es mi tierra, esta es mi lucha!” (Translation: This is my land, this is my fight!), “No justice, no peace! No racist police!” and “Chicano Power!”

After reaching the station attendees marched back to Chicano Park, where Brown Beret Eddie Alvarez gathered those in attendance to read the seven demands of the march, including the right to medical aid without interference of law enforcement and for the community to have the means to hold law enforcement accountable for delaying medical aid. After the march the Brown Berets welcomed participants and the community to enjoy some chicken tacos and seasoned watermelon.