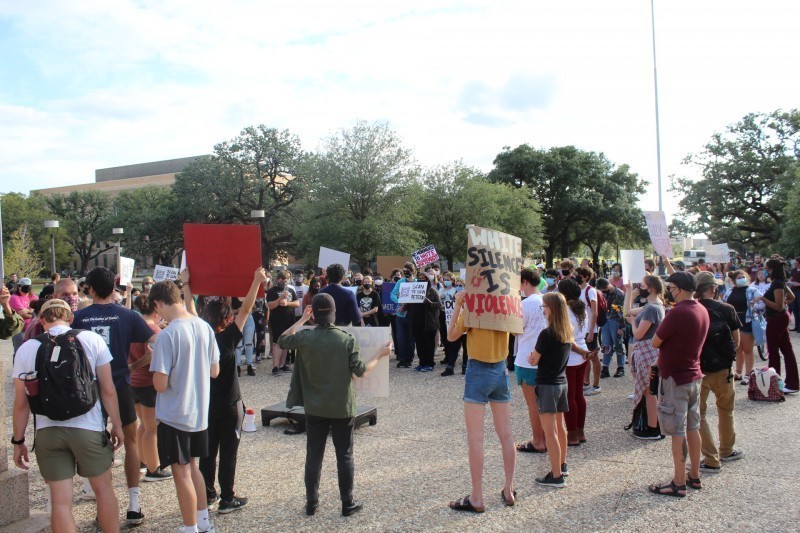 College Station, TX – On September 16, Students for a Democratic Society at Texas A&M University held a protest against the continued presence of a Confederate statue on their campus, racial profiling in the surrounding community, and how TAMU continually fails to meet the needs of Black students on campus.

Roughly 60 students, faculty and community members demonstrated in front of the Lawrence Sullivan Ross statue, calling for it to be taken down. Protesters chanted, “Hey, ho, ho, Sully Ross has got to go!”

Amorae’ Shamberger, from the organization Round Table Talks, spoke about her experiences as an African American Aggie, and how the university does not provide an inclusive atmosphere for oppressed nationality students, saying, “Sully is a representation of A&M saying that they don’t care how he’s a symbol of oppression for students of color, they have the audacity to say put a penny on him, he is love. I’m pretty sure we can all say he don’t represent an inch of love. Sully being removed would be the first step of A&M taking initiative in saying they will not tolerate racism and any symbol of racism here.”

A representative from the Black Graduate Student Association at TAMU called out the both the Bryan and College Station police departments for continued instances of racial profiling. They expressed that though we may be having these conversations on topics of racial injustice, we are not seeing change met in our policing institutions, demanding that “the police need to stop racial profiling,” that “it has been [proven] that people of color are still getting pulled over based on racial profiling.”

SDS organizer Mia Ogolo spoke on the atrocities committed by Lawrence Sullivan Ross, detailing the heinous actions performed by him from his time as a Texan Ranger to his time in the Confederacy as a general. His crimes included the killings Black Union soldiers who had surrendered to him during the Civil War. Ogolo stated that Ross “personally participated in the disenfranchisement and plunder of Black progress. Even after the Civil War, he was a traitor to America and to democracy, circumventing federal efforts to uplift and educate newly freed African Americans.”

Dr. Michael Alvard, SDS advisor and professor of anthropology at A&M, echoed student sentiments and emphasized the power students have to achieve change.

Ogolo presented the SDS’s list of demands, principal of which was the relocation of the statue to the university library’s archives. They also called for a shift to community control of police, and a decrease in funding to police departments, with a reallocation of these funds to social programs, education and infrastructure.

The protest concluded with an opportunity for students to step up and share their stories, which affirmed the student discontent with their administration. This event was only one step in a much longer campaign to shift the culture of Texas A&M University to one of diversity, inclusion and equality.