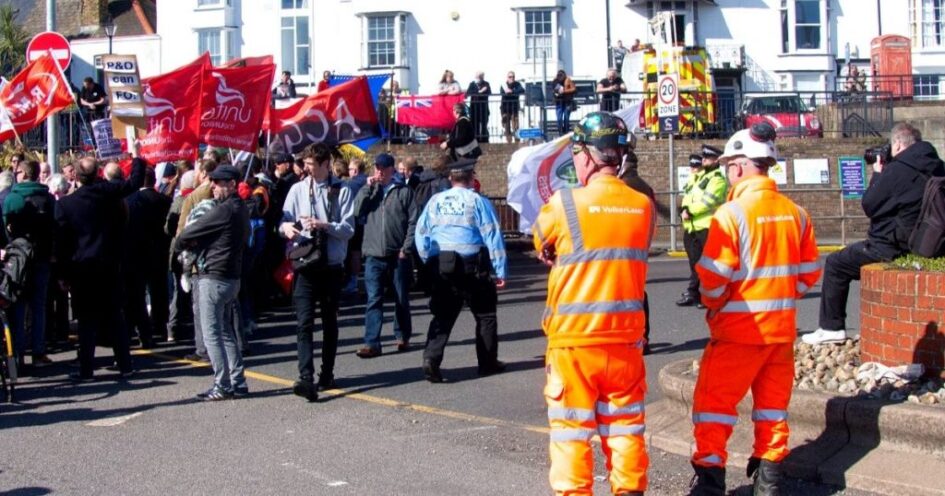 rs21 member Danny Shultz reports on protests in Kent over the mass sacking of ferry workers by operators P&O.

‘Wake up, we’ve all just been sacked.’ This is how the mother of a seafarer described her son losing his job this week at P&O Ferries. He had been asleep in his cabin and missed the extraordinary pre-recorded video message delivered by Stephen Nee, the Head of Internal Relations at P&O Ferries. A colleague had to shake him out of sleep to deliver the news.

‘Just finished two years of training and recently bought a house. Now what’s he supposed to do?’ She added that a friend works in the P&O offices in Dover and they have all been told they are not allowed to talk to anyone about what’s going on. Not even in the quiet of night when Stephen Nee might not be listening? Welcome to workplace democracy of the management style.

The news of the sackings was followed by security guards wearing balaclavas escorting workers off the ships. In Dover, the ferry crews work a seven days on, seven days off shift system. Their cars are parked outside the town and they would be taken there after their shifts by bus. On Thursday morning even the bus had been cancelled and they were told to walk or call a cab. Having to unexpectedly clear all their belongings from the ships meant the further indignity of going home with their possessions bundled into black bin liners.

The news has stunned and shocked workers in the ports of Dover, Hull and Liverpool. And not just those directly employed. Dover has a population of around 28,000 people and the port is an integral part of many people’s work. The town recently commemorated the 25th anniversary of the sinking of the Herald of Free Enterprise in which 193 people lost their lives. A moving ceremony in St Mary’s church in the centre of the town involved a reading out of all the names, including many ships crew and day-trippers who lived locally and lost their lives that day.

There are still people traumatised by those events. A completely unnecessary disaster caused by the relentless drive to make money, cut costs and compromise safety. A few months later the 1988 strike started which lasted for 16 months. The workers went back defeated and there is still bitterness about how the dispute was managed.

This is not a situation where a company has gone bust and all its buildings have been closed down. In Dover, three ferries are still in the port (a fourth is undergoing a refit). Having sacked its existing staff, P&O Ferries plans to use agency workers on lower pay and conditions and with shaky contracts of employment. It is likely that if this goes ahead there will be fewer staff, none with any experience, and many fearful and mistrustful of the company they work for.

This is not the sort of culture or atmosphere which is conducive to providing the level of health and safety that a ship needs. People might think it’s only the Channel, and only 22 miles to France, but this stretch of water experiences gale force and hurricane level storms, and these are becoming more intense as a consequence of global warming.

The sea can be a hostile and extremely dangerous environment and ro-ro (roll-on, roll-off) ferries are intrinsically badly designed and difficult types of ships to manage. Putting a great big hole at the front of a ship with a movable door goes against most principles of marine engineering. The report on cross channel ferries after the Herald of Free Enterprise sinking was an alarming read.

The Channel is the world’s busiest shipping lane and 300,000 tonne container ships, oil tankers, car carriers move at rapid speeds. And ferries themselves carry large numbers of lorries full of hazardous and fire-risk cargoes. How a poorly trained agency worker earning less than the minimum wage might be expected to deal with any number of emergencies does not bear thinking about.

P&O Ferries claims it needs to make the route viable. But if a capitalist concern can not make money out of cross -channel lorry traffic, that suggests the problem lies with them and not the workers. The Port of Dover is the UK’s busiest ro-ro ferry port handling £144 bn of trade in goods per annum. And 33 percent of all of the UK trade with Europe. While P&O claims it has money problems bear in mind that it recently paid out a £270 million dividend to shareholders and spent £147 million sponsoring a golf tournament.

P&O Ferries itself is owned by DP World a major global logistics company based in Dubai. By a weird coincidence, Boris Johnson actually visited the United Arab Emirates on Wednesday and the workers were sacked on Thursday. Given his pathological lying, nothing he might say on the issue can be believed.

At the demonstration in Dover today (Friday 18th March) a crowd of about 400 hundred assembled. There were union banners and representatives from the RMT, Unison, Unite, CWU and FBU. There were local people too, and I spoke to a couple of workers on the Eurostar who had come down to show support.

That conversation, and another with a firefighter, quickly turned to the cost of living crisis. I don’t tend to provide lead in questions so it was interesting that increases in the costs of gas, electricity, food are seeping into the public consciousness and being politicised. It’s one thing to moan about the cost of living, it’s another when that starts to become a criticism of government.

Both Mick Lynch (RMT General Secretary) and John McDonnell spoke. Lynch started by saying that he had just had a video conference call with Keir Starmer, ‘who has pledged his full support’. What this means of course no one knows, but on face value it should be welcomed. He then made some interesting observations about oligarchs and pointed out that there was now a precedent for seizing their assets. Looking across to the Dover Western Docks where the three P&O ferries are berthed he said, ‘well they are assets and they should be seized’.

This is an excellent point. How many of us, some who have been socialists for long periods of time, would ever have imagined the day when private jets, super yachts and luxury homes would be seized from billionaires. Unfortunately it’s the government doing this and not the workers, but it has set a precedent. I mean really, if the government can go about doing this, couldn’t too the workers?

The question of ‘foreign’ labour came up – and will continue to come up in this dispute. On the one had Lynch stated that there needs to be a fight for the rights, pay and condition of all workers, but then rather muddied this by insisting on ‘British jobs for British workers’. This is a god-awful slogan and is already at odds with the sacking of 800 people, many of whom are not British by nationality.

It is also a horribly divisive slogan. There are 1.5 million seafarers in the world and they are of all nationalities. That is the character of seafaring. We want all seafarers to have the same rates of pay, the same benefits of pensions, sick pay and holidays and contracts to a proper legal standard. Instead, shipping companies operate a racialised hierarchy of labour and constantly seek to undercut one set of workers with threats of another set of workers.

John McDonnell also spoke and aimed to rally the troops with some morale boosting talk of ‘we will win’. This is not guaranteed by any means. While hot words can warm the ears they don’t fill the belly. A proper strategy is needed. For McDonnell the strategy is emergency legislation on Monday and if that doesn’t happen, seize the ships on Tuesday. Fine. But what if these things don’t happen. What’s the plan for Wednesday?

Natalie Elphicke, the odious Tory MP for Deal and Dover, was there but didn’t speak, and there were shouts of ‘Shame on you!’ She has a recorder which she plays but it only has one note. ‘Look, refugees in the channel!’ She voted for hire and fire and is an unpleasant right-winger. Unfortunately, she was allowed to march at the head of the demonstration as it marched to the port. Not so much a popular front as an unpopular front.

We headed off towards the port along the A20 and this suggested a lot of possibilities but who was taking notes? Despite the police trying to get the marchers to stay on the pavement, we took over the road. This caused a tailback of lorries and cars. Big articulated lorries coming from the port blasted their horns and the drivers held out their hands with a big thumbs up. They know all about logistics, these people – lorries from Poland, Germany, Netherlands, Belgium, Romania, Latvia, Lithuania, Spain, Italy, France.

Those horns and thumbs of support felt like something raw and elemental that the speeches had missed. An instinctive rank and file solidarity. There is a lot of discontent at ground level, a million grievances every day, just put up with it, shut up about it, take it on the chin. But there are masses of people who understand what it’s like to work hard for not much reward and be bullied and shouted at and ordered around all day.

The demonstration arrived at the port and all the traffic stopped. The lorry drivers switched the engines off. The police seemed busy on their mobile phones. Some construction workers on the port redevelopment came over wearing orange overalls and hard hats. They had stopped the pneumatic drills and generators. Here for a moment was a new atmosphere, something more charged and with greater possibilities. For a moment, a glimpse not just of workers solidarity, but of workers strength and power.

That port entrance might provide the clue. And if the timetable of Monday and Tuesday fails, perhaps the plan on Wednesday should be to fill that entrance with trade unionists and workers. Idle machines and stationary lorries will exert pressure on the government and P&O Ferries unlike anything they have known before. And could put all sorts of ideas into the heads of those who do the driving, the digging, the lifting and shifting, delivering and manufacturing, who teach the children and care for the sick and the elderly.

Whatever the plan is to win this dispute, it needs to involve all of them as well. Because if a powerful company can sack 800 workers and get away with it then a dangerous precedent will have been set. All calls for solidarity are to be welcomed, and demonstrations have their place. But this dispute needs picket lines.

Why the Left has to Seize Power