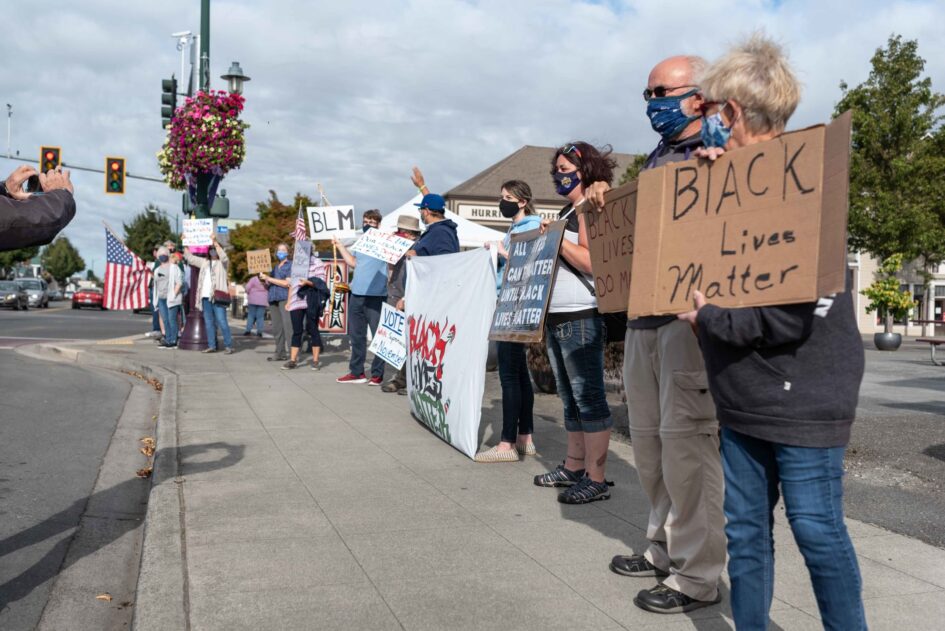 The little town of Sequim in Washington state has off-and-on been the subject of national news coverage regarding Sequim’s city council and its mayor in the New York Times, The Nation and other outlets. Of particular interest: now former Mayor William Armacost is not only a Trump supporter but a vocal follower of QAnon conspiracy theories.

In the most recent election, local citizens, finally fed up with Armacost and the conservative City Council, organized a grassroots, progressive slate of candidates. The Sequim Good Governance League won a majority of seats on the city council and removed Armacost from his position as mayor. This major victory for progressives did not just fall from the sky; it was a product of grassroots community organizing given life by the activities of Indigenous and Black communities here on the Olympic Peninsula as well as across the nation.

Armacost did not simply fall out of the sky, either. He has been here — grocery shopping, going to church, and cutting hair in relative anonymity for decades prior to his appointment to the Sequim City Council in 2018. Neither he, nor his racist and backwards ideas are uncommon in our community, unfortunately. When you drive through our neighborhoods, the support for a Trump 2024 campaign run is easily visible. The struggle against this reactionary blend of conservative politics became especially pronounced in the fight over the Jamestown S’Klallam Tribe’s Medication Assisted Therapy Clinic.

Before anyone outside of Clallam County knew who Armacost was, before SGGL was formed, before the Movement for Black Lives took the country by storm, members of the Jamestown S’Klallam Tribe were battling by themselves against the conservative city council. Things began to change on May 25, 2020, with the murder of George Floyd.

On June 7, 2020, in the wake of George Floyd’s murder by Minneapolis Police and historic nationwide Black Lives Matter protests, a crowd of over 350 people came together in Sequim for a peaceful march in solidarity.  As the march drew to a close and the crowd began to dwindle from its former size, the remaining marchers were suddenly confronted by a posse that had been called to action by a local gun shop owner.

During this time, the right-wing elements on the Olympic Peninsula had been whipped into a paranoid frenzy by various conspiracies about black-clad anarchist looters infiltrating BLM and being bused by the dozens from Seattle into rural communities all over Washington. Several men with assault rifles and dogs drove up in their pickup trucks and approached the marchers.

The local police present at this point during the march showed an apparent reluctance to suitably separate the armed white vigilantes from the marchers. They even invited the posse to debate the marchers, mainly families, women and children, many of color. The officers, directed by community members and members of the PSL, finally took action to separate the groups. By that time, most of the families had felt terrorized and left.

Thankfully, nobody was hurt on that day. However in the weeks after the incident, people in the community demanded the city government condemn the posse, specifically petitioning for an official statement denouncing racism. Armacost would give no such condemnation. Instead, he made a statement about how racism only exists in people’s minds, adding that the whole thing would blow over in a couple of days and that we should “let the dust settle.”

Sparked by the Movement for Black Lives, Sequim progressives and even normally apolitical members of the community, rightly outraged by the city officials’ disregard for basic decency, justice and public safety, were catapulted into political struggle. This display of white supremacy along with the spark of the Black Lives Matter movement is what galvanized the Sequim community and gave birth to a new group of activists and organizations such as the SGGL. It was this spark that brought the community’s politics in line with those of the Indigenous people of the area.

Over the course of more than a year, the members of the SGGL turned their organization into one that was able to sweep the city council in elections and defeat every candidate put forward by the Independent Advisory Commission, a local Republican political machine which was responsible for initially scouting and coaching Armacost. The SGGL did a good job of practicing electoral politics: recruiting candidates, including two Indigenous women activists, Vicki Lowe and Rachel Anderson, who formed a unite slate along with Brandon Janisse, Lowell Rathbun and Kathy Downer, and finally, getting out the vote. But more than that, the SGGL and its members intervened in local struggles against racism and for Native sovereignty.

As long as the community stays engaged working alongside SGGL and other city council members while remembering their anti-racist roots, progressive politics has a sunny future in Sequim. Stay informed and keep active. A list of city council meetings can be found here.

Corporate Democrats have only themselves to blame for loss in Virginia, say progressives

If Biden wants to be popular, he should take on corporate greed, say progressives

How Can Some Progressives Get Basic Information about Nicaragua so Wrong?