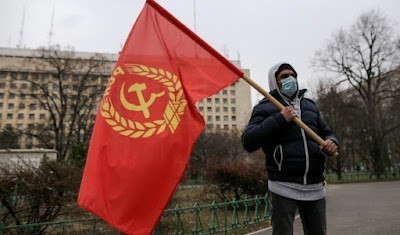 A spectre is haunting the “democratic” institutions of the European Union; the spectre of communism. On December 21st the European Court of Human Rights (ECHR) ruled that the 2014 decision of the Romanian authorities to refuse to register the Romanian Communist Party (RCP) was justified!

In its decision in the case of the “Organizing and Registration Committee of the Romanian Communist Party against Romania” (application no. 20401/15), the ECHR unanimously declared the application inadmissible. In fact, the European Court adopted the preposterous decision of the national courts of Romania according to which “the PCR program and status ignored democratic values and the country’s socio-political evolution after 1989” and “allowed totalitarian (sic) and extremist actions that could undermine national security, posed dangers to democratic values”.

The ECHR also based its decision on the fact that the PCR “did not dissociate itself from the former Communist Party of Romania”!!!

The Organizing and Registration Committee of the Romanian Communist Party complained about the refusal of the Romanian national courts to register PCR on the list of political parties. Relying on Articles 10 (freedom of expression) and Article 11 (freedom of assembly and association) of the European Convention of Human Rights, the Committee filed a complained about the rejection of its request and the reasons given by the national courts. Nonetheless, the ECHR decided to examine the complaint only under Article 11 of the Convention thus ignoring the right to “freedom of expression”.

The despicable decision of the European Court of Human Rights (ECHR) consists an undemocratic and completely unjustified action which shows the limits of “democracy” in the EU member-states. It underlines the actual nature of the bourgeois democracy and the bourgeois state, as well as the manipulation of the European Convention of Human Rights for the restriction of a series of freedoms related to class struggle. Such decisions pave the way for more prohibitions towards the activity of Communist Parties, as it already happens in some EU member-states, especially in Eastern Europe.

The European Court of Human Rights (ECHR) proves its role as a useful instrument of the dictatorship of the capital in the EU member-states. By refusing the registration of the Romanian Communist Party the ECHR serves the interests of the ruling bourgeois class in Romania and sets obstacles to the democratic expression of the country’s people.

Just for the record, the decision was made by a group of three judges consisting of Gabriele Kucsko-Stadlmayer (Austria), President, Iulia Antoanella Motoc (Romania) and Pere Pastor Vilanova (Andorra).

The Cultural Genocide in Palestine: On Sally Rooney’s Decision to Boycott Israel