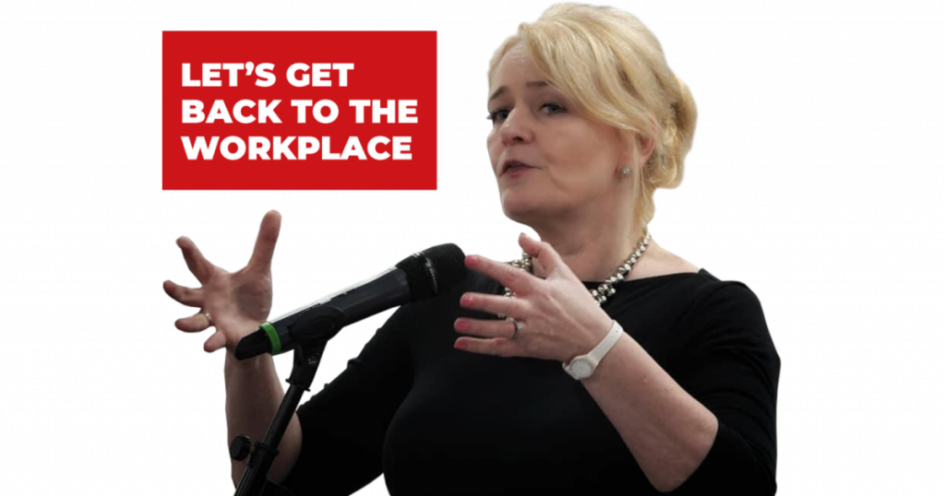 Sharon Graham, seen by most as an outsider, has won a clear victory in the Unite General Secretary election, with implications across the labour movement. She recognises the need to focus on rebuilding workplace power to reverse union decline. rs21 members in Unite respond to the election result. Sharon Graham has shocked the establishment by winning the Unite General Secretary election with 46,696 votes (37.7%). This is a great boost at a time when members of the union desperately need a co-ordinated fightback against the employers and government. It is brilliant to have a strong left woman heading up Unite; brilliant to have a Unite General Secretary who has made a commitment to building industrial organisation and building the fightback we need. Of course Sharon Graham’s election doesn’t guarantee change – but it creates opportunities for union activists to make change happen.

Graham’s victory shows that many members want more robust workplace resistance. It will encourage all those who want change and opens up better prospects for reversing union decline. But as she recognises herself, winning the election is, at best, only the start of change.

As soon as Sharon Graham declared she was standing, she was accused of splitting the ‘left vote’. This was despite her being the best candidate and doing much better in nominations than most expected. Graham provided a positive alternative to Gerard Coyne, the right wing candidate, for members who were dissatisfied with the status quo. Coyne’s vote fell to 35,334 (28.5%). The result demonstrates that the strategy of the United Left (UL) – the broad left organisation within Unite which backed Turner – of repeatedly trying to defend a failing status quo is a strategy for the left that brings diminishing returns. This, and the UL’s attachment to first past the post elections, were what created the danger of a Coyne victory.

Unite has been led by the UL since its inception 14 years ago, but it has overseen a decline in membership engagement and participation. McCluskey’s vote declined from 145,000 in 2013 and 101,000 in 2010 to 59,000 in 2017. Turner’s vote this time was even lower at 41,833 (33.8%). The UL is split and in disarray. Their approach to this election illustrates the problem. The Unite Executive had approved regional hustings to give members the opportunity to hear from each of the candidates and boost engagement. Instead of seizing this opportunity, the Regional Secretaries, all of whom backed Turner, ensured that none were organised. Turner failed to take part in the only public hustings, hosted on LBC.

The UL has been in decay for years, but this election triggered its disintegration, raising the question about how we build a new left within Unite. As Graham pointed out, there is really no organised left within Unite at the moment, which is a real problem, but we shouldn’t simply replicate it. The UL was critical to Unite backing Jeremy Corbyn for Labour leader and helped secure positive policy changes in Unite, though it blocked others, such as on free movement, Trident, defence diversification, nuclear power and attempts to democratise the union. With the UL’s McCluskey at the top of the union it often acted as a lay member support network for the leadership and drew in many people with no real left credentials who were simply after positions as full time officers or senior lay reps.

The campaigns around Turner and Coyne engaged in negative campaigning, attacking the union or circulating sexist material against Graham. Neither should have any place in a union election. Not only do these tactics not encourage membership participation, they turn members off and further suppress the vote. Graham was not only right to stand, as the only candidate offering positive change, but she was right to highlight the fact that she was the only female candidate when sexism remains so widespread in the movement – and within Unite.

Having endured over four decades of neoliberal cuts, restructuring and work intensification, we now face a new pandemic offensive from the Tories and employers. They hope to take advantage of the Covid crisis to make workers pay yet again. With ‘fire and rehire’ gaining traction across the economy and another threatened round of austerity being scheduled for the autumn, candidates had an opportunity to show how Unite should respond to the situation. Neither Turner nor Coyne offered any serious proposals.  Unite members deserve better.

Another poor turnout (around 12%) shows the disengagement of the majority and the scale of the task ahead. Since the last election in 2017, former members of UCATT in construction have become eligible to vote, offsetting membership losses. Despite this, the approximately 125,300 votes cast are down from 130,071 in 2017.

The Covid pandemic made it harder for the campaigns to talk directly with reps, activists and members, but this can’t explain the weaknesses of all of the campaigns. Although Graham’s campaign came closest, none of them offered a radical vision for change to address the growing problems members face and none of them managed to inspire enough new layers to vote to increase the turnout significantly. There has been little evidence of member-led and member-focused campaigning, which meant the campaigns missed opportunities to build networks. The lack of hustings and members’ meetings has made this one of the most passive General Secretary elections in living memory.

Sharon Graham won on a commitment to return power and focus to the workplaces. We need to use this opportunity to revitalise our union at workplace level and beyond. She has told supporters that she wants to build on the networks brought together in her campaign, and that she recognises the importance of them being member-led to keep her accountable.

We will face major obstacles to implementing Sharon Graham’s plans. The Unite structures that aren’t fit for purpose are still in place. She will undoubtedly face resistance from sections of the officer-corps who don’t want to see a greater focus on organising. None of the Regional Secretaries backed her, and some will doubtless want to hold on to their power rather than moving to a structure that better matches the employers members face. The Labour Party establishment, not just the right, will pile on the pressure against challenges to Labour local authorities and mayors. We will need to extend the activist networks beyond those directly involved in her campaign to ensure that her programme is implemented. To achieve the changes members voted for, we will need pressure from below that not only supports her plans but goes beyond what she can do from the general secretary’s office. We need every Unite workplace strike-ready and to inspire workers to organise everywhere with wins against prominent companies like Amazon.

A significant weakness in Graham’s campaign was her reluctance to take a public position on current issues such as climate, Covid, gendered violence, the Police Bill or migrant rights. Strengthened workplace organisation raises workers confidence and aspirations and makes it easier to tackle a broad range of issues. But the left will need to fight for principled, socialist politics within the union – militancy isn’t automatically radical. There are examples in the USA of unions adopting a robust organising approach to force employers into partnership deals rather than helping workers build and use their power on an ongoing basis. Despite Grahams’ win and whatever emerges from the realignment of the left within Unite, the left needs to maintain its independence from the general secretary at the same time as working with her to win change.

Despite all of the problems we face, there is no shortage of opportunities to build and support resistance to the employers’ offensive. Along with other health unions, Unite is running a consultative ballot over health workers’ pay. Given the surge in support for the already-popular NHS as a result of the pandemic, this has the potential to be a defining dispute against the Tories. However, involving enough members to reach the threshold is the major challenge and Unite isn’t yet doing enough to help activists shift this. The new General Secretary should address this urgently.

With the effects of the Tory Brexit and the pandemic combining to create labour shortages across the economy, we have a real opportunity for some big wins. In hospitality and construction workers are seeing pay rates rising rapidly. But in many cases it will require collective action to take advantage of the favourable situation. At Anglian Water, branch reps for HGV drivers recently won massive £400 per month pay rises with improved leave, to retain drivers. These pressures exist across several sectors in the economy. If these skill shortages were met with co-ordinated action we could start to see an effective worker led response to the crisis. To deliver this kind of co-ordinated action we need networks of rank and file activists who can push forward even when some officers don’t.

It’s not just the workplace issues that present opportunities. Even the pandemic couldn’t suppress new waves of Black Lives Matter activism or resistance to gendered and police violence and the Police Bill. Housing campaigns continue to gather strength while the government tries to cut Universal Credit. The latest developments in Afghanistan have widened the audience for migrant solidarity. Climate activism is likely to return to the centre of politics. Taking up such issues in the workplace, alongside solidarity with strikes in other workplaces, presents opportunities to draw new people into collective activity and to connect the potential power of workplace action with all the big issues facing working class people. We can’t sit back and hope our General Secretary will do this for us.

Everyone who wants change should get involved in whatever new grouping Sharon Graham launches. Unite Rank and File, the network set up in 2017 after the previous election, attempted to build solidarity and promote democratisation and radical policies, but it hasn’t so far achieved a critical mass. Members should get involved in it but seize the opportunity provided by Graham’s victory to create something with greater reach.

Unite Rank and File are encouraging activists to join in an online discussion at 4pm on Sunday 5 September to discuss the election result and the next steps for building solidarity and an independent network of activists within Unite.