Shoot to kill: the British army on Bloody Sunday 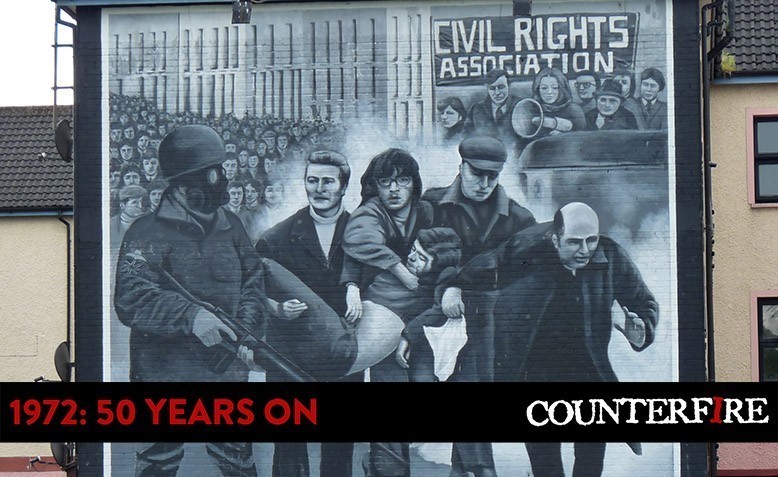 50 years on from the Bloody Sunday massacre, Chris Bambery recounts the deliberate decision by the British state to murder unarmed protesters in Derry

What took place on Bloody Sunday, 30 January 1972, gives the lie to the standard story of why the British army was in Northern Ireland during the 1971-1997 Troubles. That story portrays the British army as “piggy in the middle,” trapped between Republican terrorists on one side and Loyalist killers on the other, valiantly trying to keep them apart.

But on Bloody Sunday one of the crack units of the British army, the Paratroop Regiment, were specifically sent to Derry. Fourteen unarmed, innocent civil rights protesters were gunned down in cold blood.

The truth is now known that they were on a carefully prepared shoot-to-kill operation sanctioned at the highest level.

But at the time, in the wake of the killings, the Widgery Enquiry, headed by the Lord Chief Justice of England and Wales, just repeated the army’s lies that they had only responded to IRA gunfire. The Provisional Irish Republican Army (IRA) had withdrawn all its volunteers and weapons from Derry’s Bogside, where the march against internment without trial was taking place.

If there was any acknowledgement of any possible wrongdoing it was because ordinary squaddies “slipped off the leash” and proceeded to “run amok”. That’s the excuse offered by British commanders after a long list of bloody atrocities: the massacre of fleeing Jacobites after they were routed at Culloden, the atrocities involved in the brutal suppression of the 1857 Indian Rebellion, the 1919 massacre at Amritsar in the Punjab, the first Bloody Sunday when 30 people watching a Gaelic football match in Croke Park, Dublin, were shot dead. The list is long.

The British army is run on rigid, class lines and squaddies are trained to follow orders – not to strike out on their own.

It has now become known that there was another very similar operation involving the Paratroops six months before.

Six months before, between 9 and 11 August 1971, as internment without trial was being introduced, aimed at Republicans and some socialists involved in the civil rights movement, the 1st Battalion of the Paratroop Regiment shot 11 civilians in Ballymurphy, West Belfast. No one was brought to book for this and in 1972 a coroner returned an open verdict. Relatives seeking justice had to wait until last year for a coroner to declare all the victims innocent and to state the killings took place “without justification.”

Internment was followed by the creation of No-Go Areas in West Belfast and Derry’s Creggan and the Bogside, with barricades built to keep out the British Army and the Royal Ulster Constabulary – a heavily armed, deeply sectarian police force. These areas had, effectively, opted out of the United Kingdom. That could not be allowed and the British elite was seething about it.

The operation which led to the Bloody Sunday killings was a direct consequence of that.

In December 1971, Home Secretary Reginald Maudling was told this by the commander of the British army in Northern Ireland, General Harry Tuzo:

“A choice had to be made between accepting that Creggan and Bogside were areas where the army were not able to go…or to mount a major operation…which would involve, at some stage, shooting at unarmed civilians.”

In the first week of 1972, the commander of the British army in Northern Ireland, Major General Robert Ford, wrote a memorandum to his superior Tuzo, following a visit to Derry, saying he was “disturbed” that the army and RUC in Derry were too soft in reply to the almost daily rioting which occurred at Free Derry Corner, the entrance to the no-go area. He concluded:

“I am coming to the conclusion that the minimum force necessary to achieve a restoration of law and order is to shoot selected ringleaders amongst the DYH [Derry Young Hooligans]… I am convinced that our duty to restore law and order requires us to consider this step.”

“As to Londonderry, a military operation to re-impose law and order would…be a major operation necessarily involving numerous civilian casualties.”

Later, when Ford appeared before the Saville inquiry into Bloody Sunday, which would come to a damming conclusion concerning the events of that day, he claimed not to remember having written the memo to Tuzo.

On the day of Bloody Sunday Ford was in Derry, although he had no formal role in the operation, and as the Paras charged through the barbed wire was heard shouting “Go on the Paras!”

Ford had experience of colonial war, serving in Palestine immediately after the Second World War, and clearly viewed the conflict with the IRA in exactly that light.

A second aim of Bloody Sunday was that it was hoped the IRA would respond to the killings directly and the Paratroops could use their better training and heavier weapons to hit them hard. Fortunately, the IRA did not respond.

Immediately after the killings, the British Home Secretary, Reginald Maudling, stood up in the House of Commons to tell MPs that the troops “returned the fire directed at them with aimed shots and inflicted a number of casualties on those who were attacking them with firearms and with bombs.”

At this point the MP for Mid Ulster, Bernadette Devlin leapt to her feet on a point of order. When her objection was dismissed by the Speaker, she shouted, “Is it in order for the Minister to lie to the House?”

As Maudling tried to continue with his statement, Devlin shouted again was up again, yelling, “nobody shot at the paratroopers, but somebody will shortly.” Adding that Maudling was “that murdering hypocrite.”

As the Speaker struggled to maintain order, Devlin threw herself at Maudling, punching him before Tory MPs pulled her off.

The next day Devlin, the only Westminster MP present at Bloody Sunday, told the House of Commons the truth about what had happened:

“The first shot fired came from the British army wounding a civilian below the knee.”

Then she spoke of the panicked people, who were fleeing and falling:

“It was a sight I never want to see again: thousands and thousands of people lying flat on their faces on the ground. I was lying on my mouth and nose.” While prone, she tried “to tell the people to keep their heads down and on no account to rise any higher than their knees, but to crawl—crawl on the streets of their own city, on their hands and knees—out of the line of fire. That is what they did.”

Those involved in the planning and direction of Bloody Sunday, including, of course, Edward Heath and Reginald Maudling, suffered not a jot from it.

After his service in Northern Ireland, Tuzo was appointed Commander-in-Chief British Army of the Rhine and in 1976 he was made Deputy Supreme Allied Commander Europe. After retirement in 1979, he became chair of Marconi Space and Defence Systems until 1983.

He was awarded the Most Honourable Order of the Bath in 1973, rose to become a Knight Commander of that Order and then further to become one of the select Knights of the Grand Cross.

In October 1972, Col Derek Wilford, the man in charge of the Parachute Regiment in Derry on the day, was awarded an OBE (Order of the British Empire) by Queen Elizabeth. The Saville Enquiry was equally damming of his role that day.

In 2019, ten years after the publication of the Saville Report, Wilford rejected its findings stating the old lie once more:

“We were under attack and we will actually remain convinced of that actually to the end of our days.”

The second in command of the paratroops in that day, Captain Michael Jackson, would become commanding officer of the Parachute Regiment, commander of the British Army on the Rhine, Nato chief in Kosovo, then Chief of the General Staff – Britain’s top soldier.

Jackson had also been present at the Ballymuphy Massacre.

Giving evidence at the Saville inquiry, he too suffered from severe loss of memory in regards to the fact that on Bloody Sunday itself he had written up the accounts by each soldier involved of who they supposedly targeted.

The British elite and military had got their revenge for the No Go Areas but it quickly became apparent that the reaction not so much in Northern Ireland, which they discounted out of colonial arrogance, but in the Irish Republic and in Britain itself threatened their position in Northern Ireland.

In the Republic a general strike spread quickly. Every airport was closed, the mail was halted, no buses ran, no trains ran, no factories opened, pubs and shops were closed, for two full days. On the first day, the Dublin Council of Trade Unions, a rank-and-file trade union group, called a march on the British Embassy. When it arrived there they burnt it down. The Gardaí, the Irish police, stood back helpless.

The Dublin government was scared witless and then on the second day came up with the idea of calling a national period of mourning!

In Britain, 30,000 marched in London and fought police outside Downing Street. There were protests across the country. In Edinburgh University students marched into the city in protest and building workers struck. The Labour Party and trade union leaders, though, argued against getting involved in Northern Ireland.

The British ruling class are the oldest capitalist class and are not stupid. They realised they had to change quickly from a policy of direct repression. They simply dismissed the Unionist government of Northern Ireland, which had run the place as a one party state since 1921 and partition, and entered talks with the IRA after the latter agreed a ceasefire.

The Heath government was not prepared to reach an agreement. Their aim was that when the talks and the truce broke down, as it did, to put the blame on the IRA and to damage sympathy for them in the Republic and Britain.

Finally, I recall as a 16 year old in Edinburgh, sitting watching the TV reports live from Derry on the day of Bloody Sunday. Of a priest waving a white hankie as a dead man was carried away, and shouting angrily when a Paratroop tried to intervene. He became Bishop of Derry. Tears were coming down my face and I was angry, very angry. That anger has never left me. And then as now I applaud Bernadette Devlin McAliskey’s action in punching that lying, corrupt shit, Reginald Maudling.

It was murder. The men who were responsible went unpunished. But that’s the British way and of ruling classes the world over.

What remains to be said about Bloody Sunday?