Shut Down the Whole UC System! No Retreat on COLA! 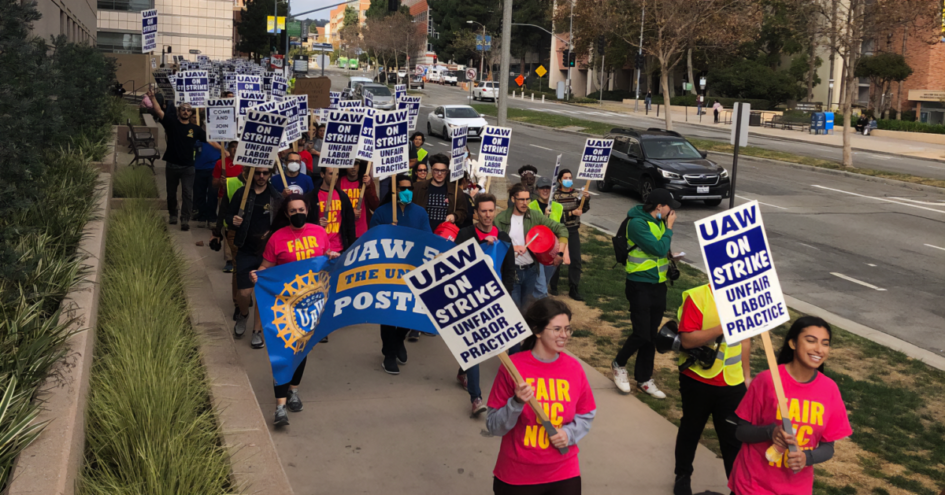 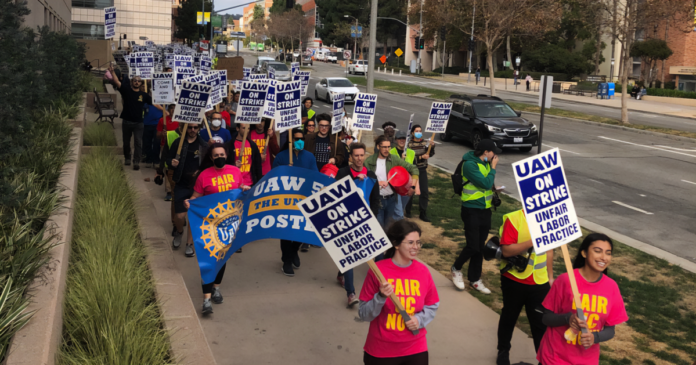 48,000 University of California graduate students, instructors, researchers and postdocs are on the biggest-ever strike by academic workers in U.S. history, and the biggest strike of any kind in the U.S. since before the pandemic.

With the strike now in its third week, the UAW 5810 bargaining team has reached a TA with management which includes some advances in pay and benefits, though, significantly, COLA is not part of the deal. As the post doctoral researchers in 5810 await a ratification vote on their TA, their leadership has emphasized that they remain on strike alongside workers in 2865 and SRU. While 5810 remaining on strike is positive, it will be critical to remain united in order for all workers to get the best possible contract. Especially as a potential showdown with management is imminent with the approaching end of term and finals period. Graduate student instructors (who are in 2865, which does not have a TA) will be able to withhold grades if they are still on strike.

There is significant, broad support in California for UAW workers. Alongside this support is the concrete solidarity of other workers who recognize the importance of a union victory over UC. Teamster drivers at UPS are refusing to deliver packages to the University of California, including its health centers, causing major disruptions for business. Some university construction projects have also been closed down as unionized construction workers walked off the job to side with the academic workers.

Undergraduate students face the same outrageously high housing costs as graduate students, and they have been rallying support, leading a march of 4,000 workers and students on UC President Michael Drake’s $6 million mansion. Meanwhile, UC workers and students in Berkeley, Los Angeles, Santa Cruz and San Francisco are struggling to pay rent and childcare on as little as $22,000 per year. Academic workers have been pushed to the edge, so it’s not surprising that a supermajority of union members (an almost unanimous 99% of ballots, with over 75% turnout) voted to strike.

The academic workers, organized into three UAW locals, are fighting for a minimum wage of $54,000 for student workers and $70,000 for postdocs, based on current rental markets. Other economic demands include annual Cost of Living Adjustments (COLA) to tie wages to rent, and childcare support for workers with families. The UC workers’ current low pay has been dramatically worsened by escalating inflation and predatory landlords. UC itself charges more to live in one of its studio apartments than the UC financial aid office officially budgets for grad student rent!

Neither “Resolve the Strike Now” nor “One Day Longer”

There has been much debate among worker activists on the importance of the length of the strike. One relatively popular slogan poses the union’s strike battle against the UC as “One Day Longer, One Day Stronger.”

This slogan reflects widespread concern among the striking workers that the UAW leaders and staff, who are working with the union’s conservative International, are in a hurry to accept a contract without significant economic gains. This latter view has been strengthened by news indicating that the UAW Bargaining Teams, or at least a slim majority among them, have already dropped the demand for COLA under management pressure. Worse still, the Bargaining Teams for 2865 and SRU have lowered their initial wage demand from $54,000 to $42,000.

These concessions are huge mistakes by the unions’ negotiators. Without COLA, any gains made with this contract will be undermined in the future. Moreover, the effect of calling off a historically unprecedented strike with a hasty capitulation for mediocre economic results would be very damaging for the ongoing morale and fighting spirit of union members, and would also be a blow to the millions of workers across the U.S. who want to win economic gains for themselves by joining the union movement. Lastly, the lowered demand to $42,000 is unsurprisingly still unacceptable to UC! This is because management will drag its heels and refuse to accept any offer, no matter how diluted and supposedly “reasonable,” unless they are forced to do so.

Of course the best outcome would be for the strike’s first day to be so intense that the employer is forced to concede quickly. However, a short strike weakens the union in the long run if it does not result in meaningful gains.

But this does not mean that a long strike is necessarily the right approach either. Long strikes can create enormous hardships for the poorest-paid workers, who will be calculating how much they lost in wages over how much they gained in a raise. In recent history, a large number of union TAs across the country have been rejected by rank and file workers, forcing union leaders to go back to the table to fight for more.

Whenever the first Tentative Agreement (TA) is offered to members and put up for a ratification vote, workers will need to collectively decide for themselves whether to accept it or whether to continue the strike. There should be space for workers to discuss the TA before voting, on the picket lines if needed, and demobilizing the strike by shutting down pickets before the vote would be a massive mistake.

The question of strike length is often a proxy for a more important discussion, which is the power of the strike. For example, while a long, drawn-out strike is not necessarily an effective strike, standing firm until the end of term and refusing to submit grades would be a powerful move that puts pressure on UC management at its most vulnerable point.

An effective strike that widens as it develops is the UC’s greatest fear, but so far, some of workers’ best instincts for strengthening the pickets have been discouraged. For example, some union-appointed strike captains have told workers to just hand out flyers to passing undergrads, instead of speaking with these students and persuading them not to cross the picket line. UAW leaders should abandon this cautious approach, and instead build up the strength of the strike.

Public sector strikes don’t have the ability of private sector workers to immediately stop the flow of profits by stopping production. Instead, public sector strikes need to make a wider, more political impact to succeed. Workers need to disrupt business as usual as much as possible, closing down facilities and creating an intolerable reputational crisis for management.

Additionally, they need to win the support of those using their public services – in this case, the students. Just as UAW picketers are actively winning over Teamsters and unionized construction workers, the union should also help undergrads organize into their own unions and strike with them for their own economic demands, including tuition freezes, student stipends, and housing allowances. This is also why picket lines should be organized to dissuade students and other community members from crossing them, not through intimidation, but through conversation and political persuasion.

Professors who are currently working are often doing what they can, within the letter of the law, to support the strike. Many are refusing to come on campus, although some of these professors are still teaching on Zoom. Some have brought their classes to the picket lines. Campus staff are honking their support as they pass by the pickets.

All of this support needs to be made more concrete in the form of a massive, coordinated shutdown. Workers across the UC system not currently on strike can, through word of mouth, join a sick-out on a specific day. The UAW leaders can name a date to shut down the UC, and other workers could stay home out of solidarity. Leaders of other unions could promote such a sick-out in a clandestine fashion, or even challenge anti-union laws by joining the pickets and arguing for their members to join them.

It is possible that such a large-scale action could topple UC management off their throne of contempt for all UC employees. This is a public university that should be run by the public and in the public interest. For years, the UC has been sliding toward becoming an appendage of the private sector and its addiction to profit-making. UC workers can only reverse this process by organizing and by deploying their collective power.

Shut Down the UC! No Retreat on COLA! End Academic Worker Poverty!

According to the UC Regents’ Report, the University of California’s assets increased from $130 billion to $168 billion in 2021. As usual, there was never any public discussion or debate on how to use this additional $38 billion. The doubling of wages of UAW workers to $54,000 would cost the university system far less than this. Such a wage increase is entirely mathematically possible, but in a world driven by the profit-hungry logic of capitalism, such gains will never be handed out freely by UC management.

When the UAW negotiators agreed to take COLA off the table and drop the demand for $54,000, they helped UC management broadcast a clear message back to the 48,000 striking workers that COLA is unfeasible. The UAW International has often played the part of arguing that management’s demands should be accepted because they are “reasonable,” implying that workers’ demands are inherently unrealistic or unreasonable. This is not the kind of unionism that UAW members and activists want or need.

Seattle City Council Member Kshama Sawant and Minneapolis Transit Workers Union President Ryan Timlin have each donated $1,000 to the UAW strikers. Both SA members refuse the full inflated wage of their office, instead only accepting an average workers’ wage and donating the rest back to causes like the UC strike.

Retreat from Mali: an historical setback for French imperialism

Nazis on the retreat as Russian encirclement bites in Ukraine

Climate change and war: The whole social structure needs to be overturned