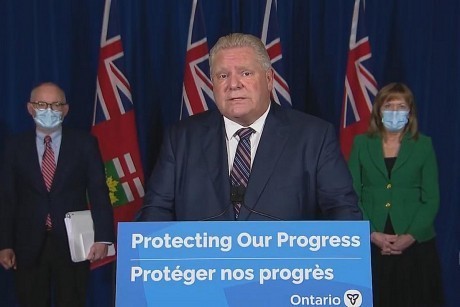 It’s a twofer for Doug Ford: use COVID as a pretext to privatize health services and at the same time rake in piles of corporate donations for his bulging re-election funds.

Early in January the Ontario Conservative government furthered its privatization agenda by contracting out running COVID vaccine clinics to FH Health corporation. The company bills itself as “Leaders in Corporate Testing and Wellness”. FH also got the concession to conduct for-profit COVID testing, costing as much as $350 per test.

According to a Ministry of Health official: “The Ministry of the Solicitor General entered into an emergency procurement with FH Health to establish additional vaccine clinics as they already had physical capacity and Health Human Resources supports in place.”

Oddly, the initial announcement of FH Health’s contract was made by Education Minister Stephen Lecce, saying the firm would focus on immunizing school students and staff. That seems to have been a smokescreen: a scroll through FH Health’s website reveals their focus is in retail malls, not schools.

The choice of FH Health was unilateral, and other companies were not even allowed to put in competitive bids.

In a circumstance which both FH Health and the Tories say is purely coincidental, just a few months before the partnership was announced, every member of the FH Health board of directors, and their spouses, their children and some their inlaws donated the maximum legal amountto the Conservative Party. Compounding this astounding coincidence, all of these donations were made within days of each other.

FH spokesperson Patrick Kasebzarif insisted: “In every case they have done so on their own and most certainly not at the behest or suggestion of the company.”

As for Doug Ford, like his idol Donald Trump, he doesn’t even know the meaning of quid pro quo.

One wonders why this sleazy scandal is not widely reported by the corporate media, and then again one doesn’t.

Communists in Ontario call for escalating mass action against Ford