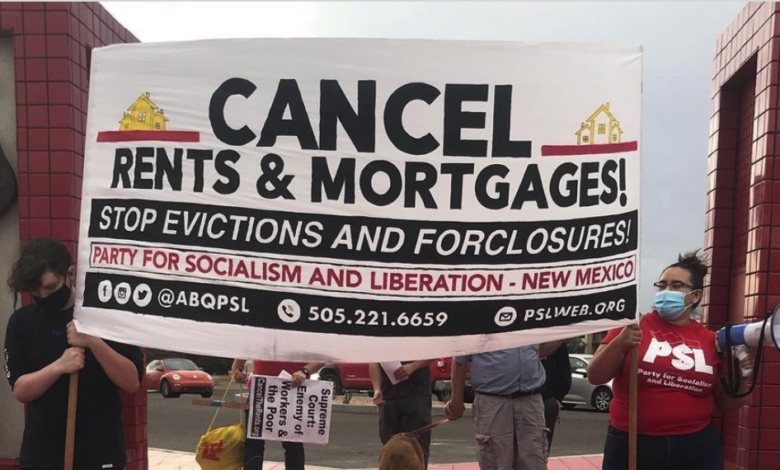 The Coronavirus Aid, Relief and Economic Security Act, passed in March, 2020 promised to provide substantial relief for working-class and low-income families including exemptions from paying rent. Although highly praised for the help it provided, the reality proved to be very different.

What the CARES Act promised was especially important for New Mexicans. They live in one of the poorest states in the nation, and the poverty rate is one of the highest in the country. During the pandemic, the unemployment rate reached as high as 8.2%. Homelessness is a constant problem. And rents are only rising — they have risen more than 30% in New Mexico in the last four years.

The portion of the Act that provided eviction moratoriums was especially important. New Mexico has a long history of providing little support for those who rent. Renters have few rights, and existing laws make it easy for landlords to evict tenants. Appeals in housing courts are universally frustrating for tenants, who compare them to factories. Housing court sessions last an average of twenty minutes and almost always decide in favor of landlords.

The eviction moratoriums were supposed to provide relief for renters by preventing landlords from evicting tenants for failure to pay rent. The New Mexico state government was allocated $170 million from the federal government to compensate landlords for lost revenue. Despite the exemption, landlords continued business as usual — one investigation found that over 11,000 illegal evictions had been filed in New Mexico between March and July of 2020 alone. Nearly 300 of these were filed in Albuquerque and the majority of these in just seven properties.

The struggle for renters

The vast majority of illegal evictions during the pandemic in Albuquerque expelled people from unsanitary, substandard housing conditions. Many living in these complexes are already vulnerable and downtrodden — those struggling in minimum-wage jobs, single-parent families, elderly and disabled people living on Social Security income, people facing substance abuse. What options do they have after eviction?

At another complex, Standard East Apartments, one tenant had an illegal eviction filed against her family for late rent — which she could not pay on time because management had shut the mail slot used to drop off rental payments after hours!

After being evicted on a noise complaint from a high-poverty complex called Alta Vista Apartments in East Albuquerque, a couple was forced to move into an extended-stay hotel. Of their income (just $1500 from Social Security), they now pay $1300 in “rent” for a small room in the hotel. This is more than double their old rent.

Where is the rental relief money?

Tenants in New Mexico have struggled to access the funds that the CARES act, and subsequent legislation, allocated for rental assistance. In order to access funds, already overworked people have to navigate complex, oftentimes inaccessible systems of social services to pay their rent and utilities.

Yet there are millions — even billions — available. New Mexico received $170 million in rental relief, but has spent just $20 million. Nationally, just $1.5 billion out of $25 billion had been spent by the end of May.

In addition to these funds, New Mexico has received huge amounts of other COVID relief money from the government. Eighteen months ago, the state received a $1.7 billion allotment for relief. The governor and legislature have battled over the allocation of these funds, and $1.1 billion remains unspent.

This strategy was intentional; capitalist politicians set up relief funds in this manner so that as little of that money as possible goes to workers. When the federal government rescinds these leftover funds from states after they’ve failed to meet the deadlines because of the inefficient set-ups they have for people to access them, politicians can simply blame the workers for “not doing enough” to get those funds.

New Mexico is a particularly acute example of a struggle that working and poor people are facing across the United States — unable to pay rent during an unprecedented pandemic and concurrent economic crisis, thousands in New Mexico and 11 million people around the country are now facing eviction.