Smart Dust: A Tiny Part of What They’ve Got Planned For You 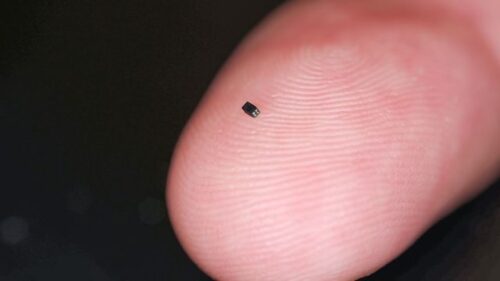 Thanks to corporate media, anything outside the accepted parameters of debate (e.g. CNN vs. Fox, NY Times vs. Wall Street Journal) is considered beyond the pale. Thus, when I wish to introduce you to what the transhumanists in charge have planned for you, by default, I sound like a fringe weirdo in a tinfoil hat. This highly efficient system keeps the rabble in line by encouraging each of us to do the enforcing of such censorship. We willingly limit our own access to information — in the name of “justice” or “science,” of course.

With that in mind, I offer you a 2-minute video on “smart dust” in the hope you have enough attention span and open-mindedness to focus that long:

Keep in mind that the above video is already five years old. In tech years, that might as well be a century. As far back as 2013, MIT was talking about “How Smart Dust Could Spy On Your Brain.” Smart dust (or “neural dust”) is already here, already in use, and will soon be a daily part of your life — whether you ask for it or not. Are you okay with that?

Smart Dust is comprised of “many small wireless microelectromechanical systems (MEMS). MEMS are tiny devices that have cameras, sensors, and communication mechanisms to transmit the data to be stored and processed further. They generally range from 20 micrometers up to a millimeter in size. They are usually connected to a computer network wirelessly and are distributed over a specific area to accomplish tasks, usually sensing through RFID (radio-frequency identification) technology.”

You can probably see what they’ve been given the nickname of “dust.” In fact, they can even be distributed via tiny, unmanned aircraft that would serve as crop dusters of sorts. Without being detected, they’d spray the virtually invisible motes over a large area and collect information that way. They are so small, you’d never know they were there — perhaps gathering info on you. How small? The prototype smart dust currently measures 0.8 millimeters x 3 millimeters x 1 millimeter can be only 1 cubic millimeter or less in size — possibly as small as 100 microns per side. Some of you, I’m certain, are already embracing this sci-fi kind of idea as yet another fine example of  “science.” Before you get too misty-eyed about such “progress,” please allow me to remind you that smart dust was developed by (surprise, surprise) the U.S. military. More specifically, it is the brainchild of the notorious DARPA — Defense Advanced Research Projects Agency. These are the same folks who brought you mind-control weapons, cyborg insects, synthetic blood, mechanical elephants, programmable shape-shifting matter, and so much more.

So, go back and re-read the details above and recognize how easily smart dust could be weaponized. Even better, accept the reality that step one (as always) was weaponizing smart dust. And now, digest the fact that those well-intentioned and good-hearted souls in the military want to implant smart dust inside you… for your own good, of course.

“Neural dust represents a radical departure from the traditional approach of using radio waves for wireless communication with implanted devices,” said Doug Weber, a DARPA program manager. “The soft tissues of our body consist mostly of saltwater. Sound waves pass freely through these tissues and can be focused with pinpoint accuracy at nerve targets deep inside our body, while radio waves cannot. Indeed, this is why sonar is used to image objects in the ocean, while radar is used to detect objects in the air. By using ultrasound to communicate with the neural dust, the sensors can be made smaller and placed deeper inside the body, by needle injection or other non-surgical approaches.”

I’ve already told you about the Internet of Bodies. And I’ve also already told you about the Pentagon’s openly-discussed plan to insert microchips inside us to “protect” us. With smart dust, they could just let the technology waft down from the sky and have you unknowingly inhale it. Why is no one talking about this? I ask you to re-visit my opening paragraph for that answer. To even talk about smart dust is to be dismissed as a “conspiracy theorist.” Once again, those in power have trained the public to do the policing for them. Somewhere, Goebbels is drooling. All of the above has become easier to employ thanks to the pandemic. To explain that, we need to meet Klaus Schwab — the founder and Executive Chairman of the World Economic Forum (WEF), and author of a book called The Fourth Industrial Revolution. Here’s how the WEF explains this concept:

The First Industrial Revolution used water and steam power to mechanize production. The Second used electric power to create mass production. The Third used electronics and information technology to automate production. Now a Fourth Industrial Revolution is building on the Third, the digital revolution that has been occurring since the middle of the last century. It is characterized by a fusion of technologies that is blurring the lines between the physical, digital, and biological spheres.

To repeat: “a fusion of technologies that is blurring the lines between the physical, digital, and biological spheres.” This is transhumanism. It’s an ideology that proposes that technology can and must “enhance” the human mind and body and they are already working to “prove” this theory. Men like Schwab believe we must connect the physical, digital, and biological domains via steps like “implantable technologies such as smart tattoos, smart dust, smart pills, and other implantable smart functionalities.” They want to turn your heartbeat into your digital ID. Schwab and his ilk also support work going on in areas like designing human genomes, and simulating, monitoring, or even influencing brain activity, both in medical and non-medical applications. (P.S. Elon Musk is also currently setting up a company that links brains and computers.) Click here to watch Schwab telling Charlie Rose about his plans to edit your genes. Most people would’ve probably cast a wary side-eye at such suggestions — until Covid-19. For 18 months, the powers-that-be have successfully scared the population into believing anything they decree. They’ve also coerced and manipulated billions into allowing novel nanotechnology to be injected into them without a second thought. Never mind thinking, the masses are lining up to serve as unpaid PR people for the experimental jab.

With such widespread and enthusiastic compliance, there seems to be little to stand in the way of Schwab, the World Economic Forum, DARPA, Big Pharma, and the transhumanist agenda. They are counting on you going along without asking too many questions. But there’s the catch. You still can demand and reclaim autonomy over your mind and body. For starters, all you need to do is a little self-loving homework to see what they have planned for you and then… just say no. Unless, of course, you’d prefer having your consciousness uploaded to the cloud.