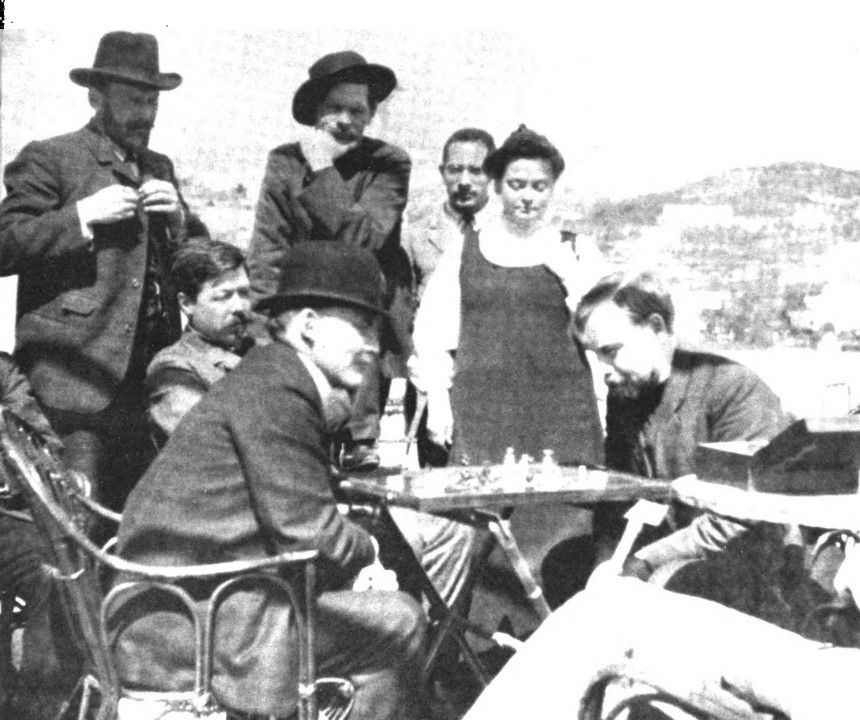 Uncovered in 1969, these snapshots show a chess game between Lenin and Alexander Bogdanov at Maxim Gorky’s villa on the Italian island of Capri in April 1908. In 1969 an archivist at the Gorky Museum in the USSR came upon some mostly previously unknown photographs that showed what appears to have been a very intense and lengthy game of chess between Lenin and Alexander Bogdanov at Maxim Gorky’s villa on the Italian island of Capri.

They were taken in April, 1908 by a young man who would later become a well-known Soviet cinematographer and film director, Yuri Zhelyabuzhsky (1888-1955). Gorky had encouraged him to take them, though surreptitiously!

Bogdanov and Lenin not only sparred at chess but also ideologically. Lenin devoted parts of his work Materialism and Empirio-criticism to countering what he saw as Bogdanov’s idealism. Bogdanov would be expelled from the Central Committee of the Bolsheviks in 1909 but would continue with the party and play various roles after the revolution. He died in 1928.

The photos are fascinating and show not only the game, but Gorky with his parrot Pepito on his shoulder.

Here the photos are shown with text from the Soviet press at the time. They include a humourous story of Lenin being taught to fish by Italian fisherman during his six-day visit and how they were so fond of him that they nicknamed him “Signor Drin-Drin” (the text reveals why).

After his departure they would repeatedly ask Gorky “How is Signor Drin-Drin getting on? The czar hasn’t caught him yet?”

There is no indication of who won the match.

AN INTERESTING SERIES of amateur snapshots, showing Vladimir Lenin on the island of Capri, Italy, in April 1908 has been pre-served until now. The photos depict a chess game between Lenin and Alexander Bogdanov, his constant opponent on questions of philosophy. Lenin criticized Bogdanov’s ideas in his well-known work Materialism and Empirio-criticism . The scene is the verandah of the Blesus de Maria Villa, where writer Maxim Gorky lived at the time.

During this period Lenin was in emigration. Though far from Russia, which was living through the years of reaction following the defeat of the 1905 Revolution, he went on rallying and strengthening the Bolsheviks. He headed a party school in Longjumeau, near Paris, and contributed to the newspapers Sotsial-Demokrat and Proletary, which were published by Russian revolutionary emigrants.

Early in April 1908 he went to Capri as a guest of Maxim Gorky, his close friend. Lenin had been overworked in recent months, and the six days in Italy afforded rest and recreation. But the leader of the Russian Bolsheviks could not forego struggle completely. Overlooking his visitor’s status, he immediately attacked the opinions of his host, whom, incidentally, he loved sincerely.

At the time Gorky was carried away by the “God-building” ideas of Alexander Bogdanov and Anatoli Lunacharsky. (Lunacharsky later rejected these views, and after the Revolution he became a People’s Commissar of Education.) Lenin, who opposed idealism of all kinds, tried to win Gorky over to his side. But such differences did not prevent their taking long strolls together across the island, angling, and visiting the mainland, where they climbed Vesuvius and toured Pompeii and the National Museum in Naples.

In Days with Lenin, Gorky wrote: “I cannot imagine another man who, so far surpassing other people, could yet remain unaffected by ambitious cravings and retain a lively interest in simple folk. . . . “One old fisherman, Giovanni Spadaro, who saw Lenin on more than one occasion, said of him: ‘Only an honest man could laugh like that.’ ”

Gorky describes further how Italian fishermen taught Lenin to angle, explaining that he should hook the fish when his finger felt the line vibrating.

“A second later he hooked a fish, drew in and cried out with child-like joy and a hunter’s excitement ‘Drin, drin!’ “The fishermen roared with laughter, gay as children, and nick-named the fisherman: ‘Signor Drin-Drin.'”

After he had gone away, they continued to ask: ‘How is Signor Drin-Drin getting on? The czar hasn’t caught him yet?’

Gorky recalled that Georgi Plekhanov (the first Marxist propagandist in Russia, who subsequently broke with the Bolsheviks) had once visited Capri. The Russian emigrants tried to talk with him, but he did not want to see anybody. A gifted, well-educated person and a keenly critical thinker, Plekhanov was also known for a certain arrogance and bitterness, an inclination to self-admiration. Lenin, on the contrary, was altogether free of these qualities: naturally the Russian emigrants made him one of their own.

This group of photographs, unfortunately, depicts only one episode in Lenin’s six-day visit to Capri. Most of the snapshots (the first at top is the exception) were discovered recently in the archives of the Gorky Museum: they consisted of prints without negatives.

Researchers believed originally that the pictures of Lenin at the chessboard were taken by artist M. Botkina. Not long ago, archive documents and the testimony of contemporaries led to a discovery: The photographer was actually Yuri Zhelyabuzhsky, who later became famous as a film director and cameraman. Zhelyabuzhsky was the son of Maria Andreyeva, an actress at the Moscow Art Theater and close friend of Maxim Gorky. The youngster, who was known as Yura, had just become interested in photography. Incidentally, ten years after that meeting on Capri, he took pictures of Lenin in Moscow on the first anniversary of the October Revolution.

At Gorky’s home on Capri, photography was everybody’s hobby. The host himself thought up plots, Maria Andreyeva directed, and Yura Zhelyabuzhsky served as technician.

Yura kept clicking his new camera endlessly. Before Lenin’s arrival, Gorky suggested to the boy that he take pictures of the visitor unnoticed. In those days the concealed camera was not usual among amateur photographers. So involuntarily, Gorky had provided quite a creative idea. In fact, he had simply feared that Lenin might object.

And, indeed, looking through the family album at Yuri’s humorous photos, Lenin joked that it was risky to get within camera range at the villa. From now on, he announced, he would turn his back on the indomitable amateur.

Yet Zhelyabuzhsky managed to take Lenin’s picture calmly from different angles. In only one photo the visitor has his back to the camera (below).

While Lenin was amused by the pictures at first, he finally asked Yura to put his camera away. Possibly he was afraid that the snapshots, in some mysterious way, might fall into the hands of the czarist okhranka (the secret police) and that unwittingly he could jeopardize both his host and the other guests.

The photos reproduced here show some technical flaws. If the negatives had been found, those defects could have been corrected. But so far their whereabouts are unknown.

Also, several of the details conflict. For instance, two snapshots show the same woman, Bogdanov’s wife. But somehow during the chess game her dress has changed. In the first picture she wears a white blouse, while in the second her clothes are dark. There are also differences in the details of Maxim Gorky’s clothes. It appears that the partners forgot about time in the heat of battle, and the game lasted so long that the villa residents managed to change for dinner. As the game progressed, the audience grew. The photographer’s mother Maria Andreyeva, joined the group. In the photograph above she is seated to the right. The man behind her is unidentified. The second woman is probably Mrs. Bogdanov, who has changed her clothes. Gorky’s parrot Pepito, on his master’s shoulder, is another addition. Yuri Zhelyabushsky evidently made these shots with a concealed camera.