So You Go Deaf at a Protest: *MIC/MICC* at the Helm 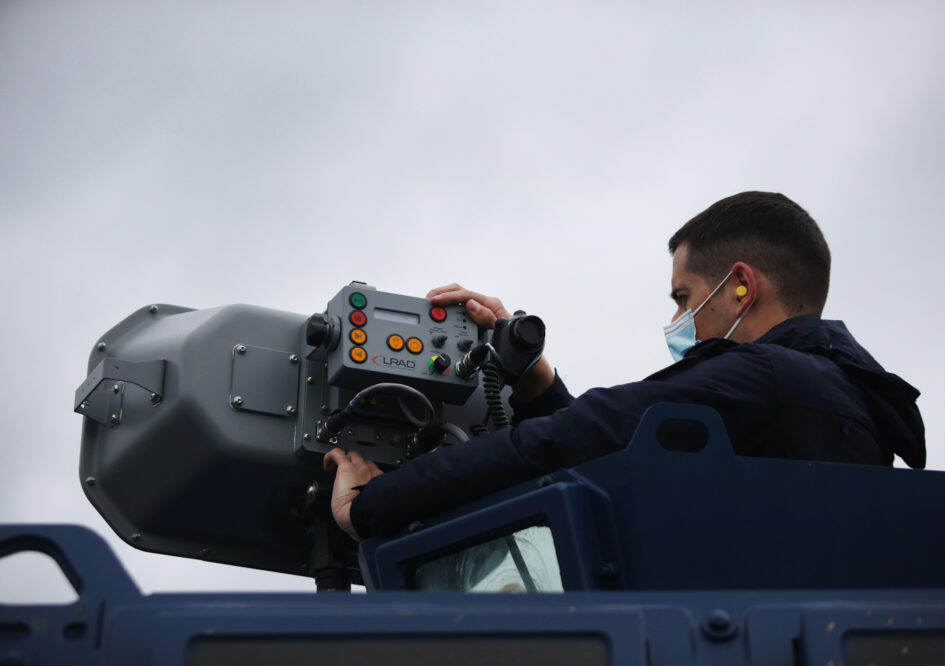 You get a story on the supposed Havana Syndrome, and then you also get the concept of mass psychogenic illness (you know, it’s all in your head, buster, those heart palpitations, the sweats, the throbbing veins, after getting mRNA “vaccinated”) explained, and, well, no huge outrage on these weapons of mass destruction created by USA, Israel, UK, France other shit-holes. None. Yes, of course, China and Russia, they have their directed energy weapons, their lasers, their rail guns.

As a collective, we just take it up the rear end daily, a thousand times, with these illustrations of the perversion of the inventors (scientists) and the CEOs and their armies of Eichmanns and then their armies of wrench turners and computer motherboard makers to help build these tools of oppression and murder. .

Get this one here:

DEW manufacturers seem to be developing more hand-held versions of what was industrial-scale military weaponry. So they are transitioning from something that was the size of a truck used in Afghanistan or Iraq and turning it into something more like a taser that can be held by a police officer. In fact, the Taser Corporation, as well as other manufacturers of crowd-control weaponry, are listed in the WikiLeaks files as being manufacturers of directed energy weapons.”

LRADs are used at airports to deter wildlife from runways. But they are also commonly used by law enforcement against protestors, such as at Occupy Oakland, the George Floyd protests, and at the 2017 Women’s March.

[An EU police officer deploys an LRAD near a popular refugee crossing point on the Greek – Turkish border, May 21, 2021. Giannis Papanikos | AP]

LRAD focuses a piercing and unbearable noise at those at whom it is pointed, leaving targets dizzy and suffering headaches. It is undoubtedly effective, but also poses a risk to human health. The National Institutes of Health advises that permanent hearing loss can begin when exposed to sounds of more than 85 dB. Yet police LRADs are capable of producing sounds of higher than 150 dB. There are serious concerns that the LRAD will be used liberally and illegally to disperse peaceful demonstrations. This is already happening: in 2017, the city of New York was forced to pay $748,000 to Black Lives Matter protestors targeted with LRAD. The NYPD suspended its use.

So, look at the thug, with earplugs and fake mask on, while using a weapon turned on refugees. Now if this is not a picture of the Great White Sadistic Race, then, I can’t begin to help you, kind reader.

Our tax dollars at this murderous work —

So, from illegal and unethical and monstrous weapons against we the people, to the power of the Food and Drug Administration’s prostitutes in the employ of Big Pharma and Big Med:

Yep, emergency use authorization to approve the universal jabbing of hundreds of bottles of boosters on the wall, that FDA is something else —

Resveratrol, a plant-derived polyphenol found in grapes, could be eliminated in supplement form like pyridoxamine (B6) was a number of years ago due to an FDA back-channel that lets Big Pharma turn supplements into drugs. If Big Pharma asks the FDA to remove resveratrol, the agency’s job of eliminating these supplements is made much easier if it gets the “mandatory filing” requirement that it wants. We need to fight for major changes in the law and to block this “mandatory list” from ever passing to protect our access to important supplements.

So, imagine, all those supplements, all those proven natural elements to keep us out of the medical system. Out of the death chambers of doctors’ offices and mass murder hospitals. You know, this FDA and CDC and NIH group of liars, or in some camps, poison delivery villains:

Rumble — Expert Testimony provided by Dr. Christina Parks, Ph.D, to the Michigan House of Representatives in hearing on HB 4471. This is an unedited screen recording. This science of viruses, what they can and cannot do, and that is a huge discussion point, though I see this doctor talking to glazed eyes in the Michigan House — Eight minutes to get illuminated so please, watch. This absurdity, using boosters of those mRNA jabs to stop the Delta Variant? Makes zero sense. Listen, watch, and enlighten yourself.

If there are no national leaders, folks with bully pulpits, with media stages, to really drill down on the absurdity of this country, these trillions lost/stolen of our tax dollars, then the cascading number of stories will continue to come out with no umph, no fanfare, no repercussions.

The Pentagon doesn’t care that it snuffed out innocent lives in an airstrike; it does that all the time and its officials would do it a lot more if that’s what it took to secure their futures as lobbyists, consultants, board members and executives for defense industry corporations after they retire from the military. And the mass media don’t care either; they only cared about this one particular highly politicized airstrike during a withdrawal from a military engagement the mass media vehemently opposed.

“Pentagon acknowledges Aug. 29 drone strike in Afghanistan was a tragic mistake that killed 10 civilians.” Can you believe that headline? Not “admits” but “acknowledges”. Not “killed children while targeting an aid worker based on flimsy evidence” but “was a tragic mistake”. How many times did New York Times editors rewrite this? Imagine if this had been a Russian airstrike.

It’s the CIA (and assassinations) Stupid!

And so, we get back to the USA, CIA, all those nefarious mutants from the UK, Israel, et al. I was almost five when Dag Hammarskjoild was murdered (1961). This documentary goes around the evidence, gets into the ugly reality of MI6 and CIA and apartheid whites wanting to eradicate the Blacks in, well, Black Africa. Lo and behold, the documentary that looks into the UN chief’s murder exposes another reality — a clandestine group using fake medical doctors and fake clinics to inoculate Blacks (poor, of course) with HIV, to help spread the deadly virus.

The mystery of the second U.N. secretary-general’s death festered until the 2011 book Who Killed Hammarskjöld? by British researcher Susan Williams, who uncovered new evidence that pointed to the likelihood that U.S., British and South African intelligence had a hand in his death in a plane crash in Northern Rhodesia, today’s Zambia. He was on his way to negotiate a cease-fire in Katanga’s separatist war from the Congo.

Williams’ findings led to an independent commission that called on the U.N. to reopen its 1962 probe in the killing, which ended with an open verdict. “The possibility … the plane was … forced into descent by some form of hostile action is supported by sufficient evidence to merit further inquiry,” the commission concluded.

All roads lead to hell, when it comes to USA, Israel, UK, EU and Canada. Exterminate all the Brutes!

Check out more on Dag over at Consortium News —

Oh, the truths of the day, around 6 million people dead because of the War on Terror. Six million!

“at least 5.8 to 6 million people are likely to have died overall due to the War on Terror – a staggering number which is still probably very conservative.”