Social Media: “Who Would You Like Me to Be?” 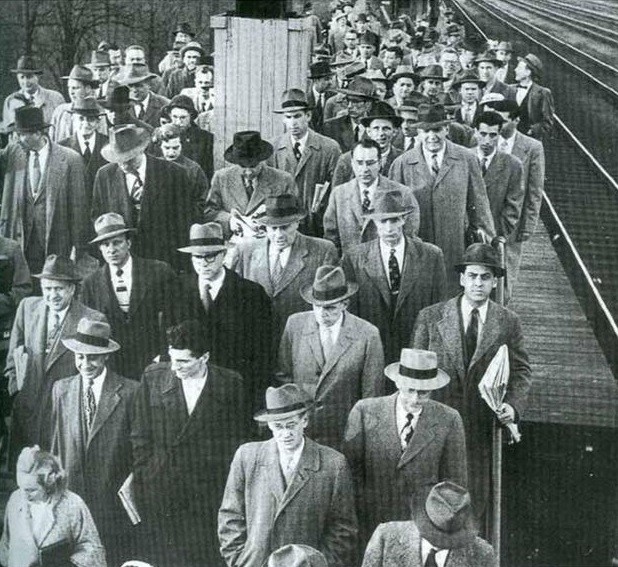 Way back in the 1830s, the brilliant Alexis de Tocqueville, visiting the American experiment of “democracy,” found a nation of persons afraid to disagree with the “tyranny of the majority.” Despite Ralph Waldo Emerson’s inspiring Self-Reliance of 1841, there remained very few free-thinking individualists to be found. Some 10 years later, when Thoreau published Walden and “Life Without Principle,” he found very few readers indeed. 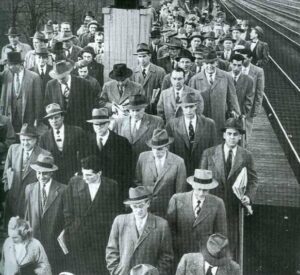 The 1950s was a time of mass conformity. Americans thought, acted, and looked the same.

It took another century, but post-WW2 social scientists became increasingly alarmed by a prevailing mass conformity–to mindless patriotism, the targeting of dissenters (blacklisted socialists), hypocritical sex-norms (shaming of unwed mothers but titillating movies), and mindless acceptance of the benevolent, paternalistic corporations which had brought Jello and Life Magazine into their lives. William H. Whyte’s The Organization Man (1956) was about the suburban executive-class which willingly accepted a kind of Faustian bargain: follow the boss, accept the hierarchy, always be cooperative–and you will “succeed,” thereby giving your (white) family the split-level home and two-car garage indispensable to social status. (The price?: one’s “soul”–but what did that matter!). Eminent sociologist David Riesman, deploring the decline of “inner-directed” individualists, wrote his scathingly influential The Lonely Crowd (1950). Like his friend Riesman, radical psychoanalyst Erich Fromm deplored the decline of autonomous character in favor of what he termed “the marketing personality”–i.e., the role-play or “presentation” of an outward persona finely-honed to win approval, acceptance and “likability” (cf. also: Erving Goffman, Donald Winnicott, Dwight MacDonald).

But their critiques proved short-lived: after all, by the late Sixties, the consumerist cornucopia made possible myriad, alternate “lifestyles,” most of which encouraged more hedonistic consumption, including sex (thanks to Kinsey, Hugh Hefner, and the birth control pill). In fact, while disillusioned, idealistic youth bitterly rejected the racist, materialistic, and pro-war conventions of their elders, others embraced a conformist, hedonistic subculture (i.e., low-grade rock music, semi-promiscuous sex, disdain for work, and foolish drug use–the latter of which differed little from the alcohol over-use of their older generation). Rather than seeking intense enlightenment through the disciplined study of philosophy and literature, they often opted for the latest fad of LSD “trips” (little realizing the irony that the hallucinogenic drug was first developed by the CIA to brainwash its former agents). Communitarian belonging, no matter how small one’s commune, included sharing of assets, childcare, even sex–and inevitably led to disagreements and eventual dissolution. To be fair, young people of the time had read humanist intellectual Paul Goodman’s Growing Up Absurd (1960), and on the whole showed a generosity of spirit which contributed to the civil-rights movement, and mobilized the campus-wide anti-war revolt.

So here we are, some fifty-plus years later, with a constant media-blitz about celebrities and billionaires. Hardly envied role-models to those rebellious youth of yesteryear, they are now, for the most part, cultic super-human figures worshiped by their awestruck, “insignificant” acolytes. Yet even a “nobody”–especially an adolescent plagued by peer-pressure and parental demands–would love to be “famous for 15 minutes” (Andy Warhol). To be liked and admired–very human longings, but not the end-goal of a maturing, authentic selfhood.

Over a century ago, sociologist Charles Cooley introduced a highly influential but pernicious concept: the looking-glass self (1902). This theory claimed that the “self” is shaped entirely by: how I think I appear to others, what I imagine their judgment of me is, and how I respond by “presenting a self” which conforms to their expectations. Social psychologist G. H. Mead–and more recently, a bevy of deluded anthropologists–have promoted similar views. Although humanistic psychologists of the Sixties rejected this approach entirely, emphasizing self-awareness, meditation, and growth-oriented, often solitary, study, Cooley’s conformist outlook, demeaning to the dignity of self-directed, singular persons, has prevailed. (By contrast, Abraham Maslow wrote: “Far from needing other people, growth-motivated people may actually be hampered by them.”

So we come to “social media,” a distinctly 21st century phenomenon. “Only connect!” exhorted the depressed novelist Virginia Woolf, who met a tragic end a century ago. But now, the more urgent question is: “Why connect?” Admittedly, having enjoyed my youth in the free-spirited Seventies, I have had no desire to connect with social media. In fact, if a professor had demanded that the class do their work on a computer–much reviled in those days–I like many would have walked out, saying “I loathe computers.” But now, young people are for the most part so habituated and brain-addled to constant cyber-gadgets that very few indeed would consider dumping them into the nearest trash can. (I personally was able, thanks to a lifetime of evading authoritarian demands, to avoid even having a cellphone. Who, unless their job requires it, would willingly want to be constantly accessible and “on call”?!).

In the Sixties, psychoanalyst Erik Erikson wrote brilliantly of the adolescent identity-crisis, in which a young person painfully separates from the authority of her parents and just as painstakingly seeks to forge a genuine identity composed of well-thought-out principles, values, and emotional cultivation. The goal, first and foremost: genuine individuation, not the social popularity which results from conformity to the demands of peers (or even, via Facebook in our time, thousands of “insignificant others”). As I previously wrote in my articles “The Sanctum of Self-Identity,” and “The Need for Alienation,” authentic self-identity is strengthened and integrated over a lifetime as one sustains one’s moral and intellectual integrity, the bedrock of one’s self-esteem as one confronts an often hostile, unappreciative social milieu. As scholars such as Mary Aiken and Susan Harter have documented, the evidence is overwhelming that adolescents and young people, trying to elicit favorable approval and attention–as in generating “likes” and “followers”–are thereby becoming more vulnerable to depressing disapproval and feelings of insufficient self-worth.

Intellectual historian and psychoanalytic anthropologist, William Manson (Ph.D., Columbia) has published numerous scholarly books and papers, and is a longtime contributor to Dissident Voice. Read other articles by William.

Social Media Is Filled With Spooks! With Mike Papantonio

‘Nearly Every War Has Been the Result of Media Lies’: Julian Assange, State-Corporate Media and Ukraine

No Letup In Economic And Social Decline