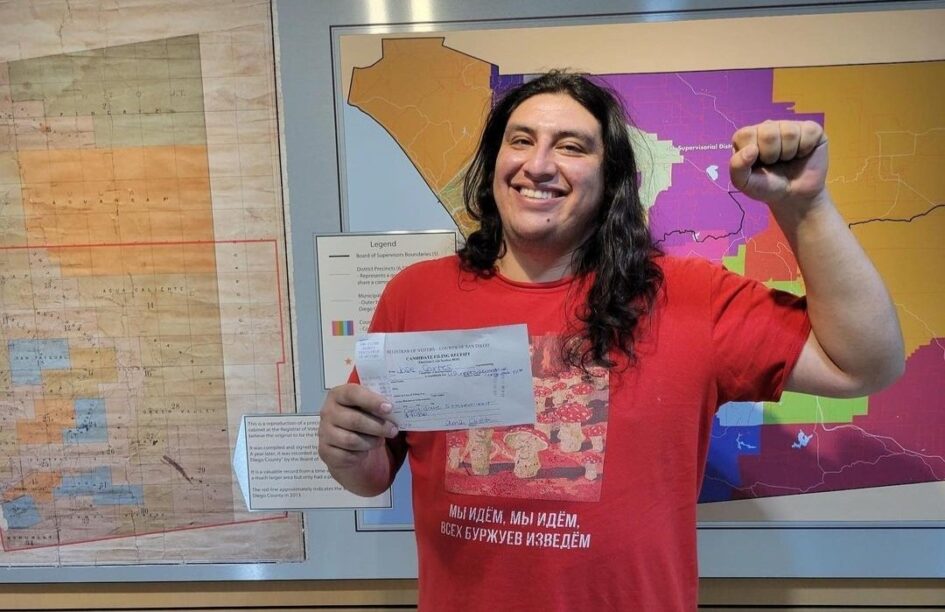 Jose Cortes, a member of the Party for Socialism and Liberation, will officially be on the ballot with a full voter guide statement on June 7. Cortes, who grew up in El Cajon, is running on the Peace and Freedom Party ticket in California’s new 51st Congressional District race for U.S. House of Representatives.

At a campaign fundraiser celebration on March 10, Cortes announced to over 40 supporters at Next Door Craft Beer & Wine Bar that the initial campaign efforts were a success. Cortes said, “Thank you for coming out and supporting a grassroots, revolutionary campaign here where they feel the safest . . . Here in this political system that they tell us it is so democratic, but we see with our own eyes is meant to keep people like us out.”

By collecting hundreds of signatures and raising over $6,000 Cortes was able to submit a 250 word statement that will go out to hundreds of thousands of voters throughout San Diego County. The full statement is published below.

I am running to represent the interests of the working class, and dedicate my platform to building real power in our communities to create lasting systemic change. I am Chicano and a member of the Party for Socialism and Liberation. I have organized with the PSL since 2017, after participating in anti-racist protests in El Cajon.

Since then I have participated in and led actions against police brutality and war. I helped organize a successful campaign to overturn a local ban on feeding homeless people.

I am running on a campaign platform that includes addressing the housing crisis by canceling rent and mortgage debt accumulated throughout the pandemic, passing Medicare for All, constitutionally guaranteeing universal healthcare and housing, eliminating private health insurance, disbanding NATO, bringing home all of the troops for humanitarian and environmental reasons, jailing killer cops, defunding and demilitarizing the police, paying reparations to Black and Native Americans, guaranteeing full rights for all immigrants, and canceling student debt. The PSL has a plan to actually defeat COVID-19 using the money billionaires have stolen from us workers.

I encourage supporters and voters to get involved with the struggle for a better world by contacting the San Diego branches of the PSL and the Peace and Freedom Party. This campaign is about building community power, and that cannot be done without working class organization and struggle. A better world is possible, but we have to fight for it!

Voter Repression and the Fight to Defend Democratic Rights

Voter Suppression and the Fight to Defend Democratic Rights

Lessons from Rio Grande: a post-Roe mirror on abortion access