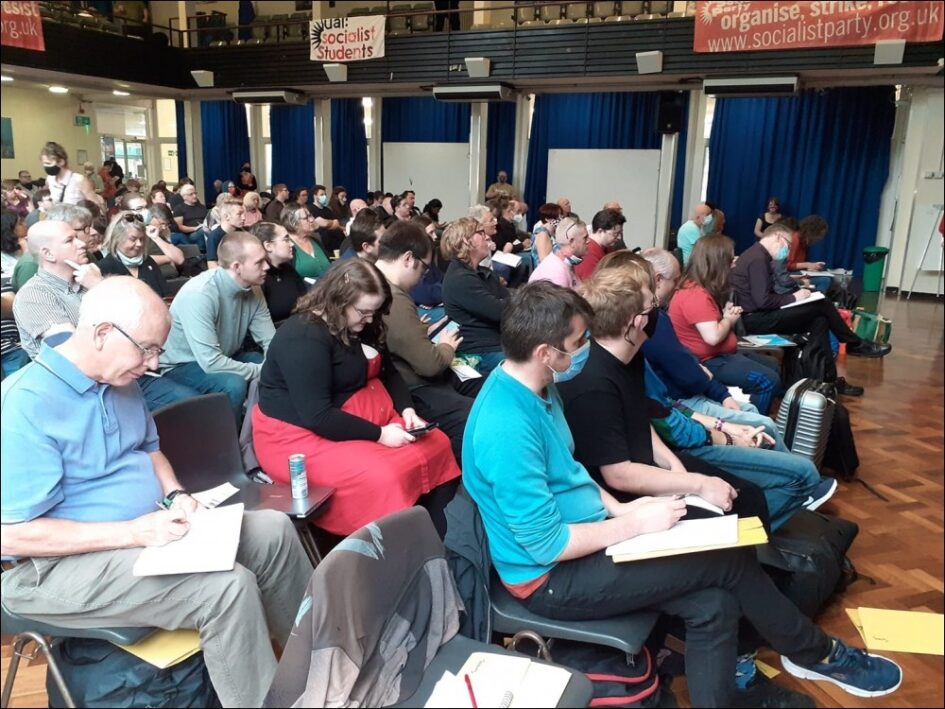 Members of the Socialist Party in England and Wales had to wait 552 days from the last opportunity they had to meet up in person at our congress in March 2020. After that long wait, the national council that took place on 4 and 5 September 2021 didn’t disappoint!

People who have previously only met on Zoom, finally met in person. Those who attended will agree that nothing compares to the energy that comes from over 150 socialists sharpening their ideas in preparation for class struggle, just a flavour of what is to come in the upcoming Socialism2021 event.

Those 552 days have been months of turmoil for the capitalist system, and the world’s working class. Introducing the discussion on perspectives and programme, Hannah Sell, the Socialist Party’s general secretary, started by commending the work of our members and branches in rising to the challenges that the pandemic, and subsequent restrictions, have posed.

She explained how, although not ideal, we were quick to learn how to use Zoom as a way to maintain weekly branch meetings, and how we have been able to continue the weekly publication of the Socialist. This meant that when the apparent quiet of lockdown was pierced by explosions of youth and workers onto the streets, like in the Black Lives Matter movement, we were well prepared to take our socialist message out and build our party. In fact, we have recruited over 500 new members to the party during the pandemic, and several of them were at the council.

The Covid crisis has revealed the incapacity of capitalism to keep us safe. Spending, and state intervention that was previously dismissed as impossible, has been shown to be possible. It have been laid bare to millions that it is workers, often exploited in low-paid, insecure jobs, that really make the world go round – manufacturing and transporting goods, caring for the vulnerable and more. And yet it is the billionaires that have got richer.

This stark inequality, and the instability of capitalism as it emerges from the economic lockdown experiment, gives big opportunities to build support for socialist ideas among the working class, particularly the youth. After all, a recent survey revealed that 75% of young people in Britain agree with the statement that “socialism is a good idea, but it has failed in the past because it has been badly done”.

The pandemic marks a turning point for capitalism and for the working class. To correspond to the changed circumstances, the Socialist Party’s political programme is in the process of being adapted accordingly. A draft ‘what we stand for’ document was distributed to members ahead of the meeting, starting the process of discussion in our branches about what political programme is needed as we begin to emerge from the pandemic.

The party building discussion faced up to the organisational tasks that will be necessary to realise the potential for growth and influence of our ideas. A pressing task is to continue to fight to find ways to arrange safe, weekly, in-person discussions for our branches in order to plan our intervention in the movements to come.

Another is to continue to finance our organisation by selling the paper, raising fighting fund donations and with our member’s subs. Heather Rawling, introducing the finance appeal, set a target of £5,000. This was eclipsed by the final total raised: £8,655 – emulating the financial commitment shown by our members and supporters throughout the pandemic.

The autumn months could see class battles develop on any number of fronts: strikes against ‘fire and rehire’, on the issue of NHS pay or against the public sector pay freeze. Workers moving into struggle will be given confidence by victories for the left in the trade unions – Sharon Graham’s victory in Unite and the left majority on Unison’s national executive committee. The Socialist Party’s trade union activists, backed up by all of our membership, have played an important role in these victories.

The discussion on our work in the trade unions revealed the important role out party is playing, with our members, and assisting with the transformation of the trade unions into fighting, democratic organisations.

Equally, autumn could also see a new surge of youth protests develop. Those in attendance will be confident in the ability of our young members who contributed to the youth discussion, to intervene and take a lead in these movements.

Our young members are preparing to talk to thousands of others in the next month as university term starts. Delegates left armed with socialist ideas and the determination to help build Socialist Students on the campuses. Our young members will also be preparing to take the lead in organising Youth Fight for Jobs protests on 9 October, linking the struggles of young people to the need to be organised in the trade unions.

For many, the national council was the first all-England and Wales meeting they had attended in person. One remarked on their confidence in the organisational capacity of our party to lead workers’ movements in the future.

Others have a long track record of leading workers’ struggles, and building the Socialist Party. Peter Taaffe, the Socialist Party’s political secretary, spoke in the discussion on perspectives for Britain, and signed copies of the most recent volume of our party’s history: ‘The Struggle for World Socialism’.

Now the task is to begin to write the next chapters of our party’s history, by preparing to take part in the class struggles of post-pandemic Britain.