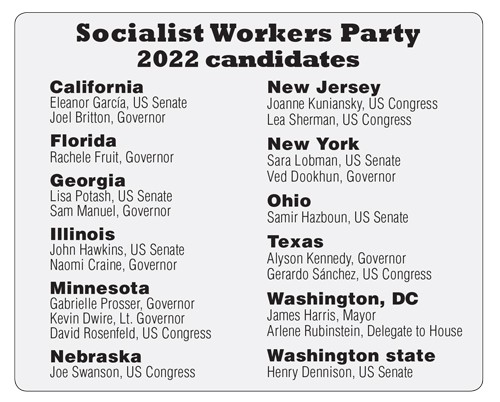 A lively debate over the war in Ukraine has been featured in the letters page of the San Leandro Times. Joel Britton, Socialist Workers Party candidate for governor of California, joined the discussion in a letter printed March 17. The SWP calls “for the defense of Ukraine’s independence, for the defeat of Moscow’s invasion, and U.S. troops and nuclear arms out of Europe,” he explained.

One letter charged Putin’s action was justified because of “NATO aggression.” A riposte claimed NATO was “one of the last bulwarks of freedom.”

Britton disagreed with both. “The claim by Putin that he was forced to invade on the grounds of moves by Washington and NATO governments is false,” he wrote. “As is the idea that Putin, a product of Russia’s notoriously Jew-hating secret police, is out to “de-nazify” Ukraine. Ukraine poses no military threat to Russia.”

“Washington claims to be concerned about Ukraine’s sovereignty, but as we’ve seen in past wars in Vietnam, Iraq and elsewhere their real concern is protecting capitalist profits and interests.” Working people in Ukraine — or anywhere else — can’t look to the Pentagon or Washington-led NATO for defense of their independence. The SWP opposes economic sanctions on Russia, Britton said, because “they fall most harshly on working people” who we must win to fight against Moscow’s war.

Britton was advancing the SWP’s campaign today against imperialism and war. At the heart of this effort is a wide-ranging propaganda campaign to win 1,600 new readers to the Militant and get out a similar number of books by SWP leaders and other revolutionaries that draw out lessons from past working-class battles, including struggles against imperialist war. The drive includes raising $165,000 in the working class for the production of the paper.

“Rail workers are doing their part to stop the Russian troops,” said Archambault, who subscribed to the Militant. “They’re taking the tracks apart.” He was referring to actions by rail workers in Belarus to stop Moscow from sending troops and equipment to aid its invasion into Ukraine.

Ardea responded, “That’s the point, it’s workers here, there and in Russia that have the potential power to end that war.”

At the doorstep of her house in Mount Wellington, New Zealand, Lia Pou, who works at a retirement village, told Communist League members Janet Roth and Patrick Brown March 24 that Ukrainians fighting Moscow’s invasion show “they are strong and independent.” Moscow’s invasion “is all about power and land,” she said. Given the strong resistance Russian forces face, “They’re not gonna go nowhere fast.”

Pou was encouraged to hear about a two-week strike at the nearby CHEP plant, where workers won significant wage increases. “The capitalist rulers are waging an intensifying war against the working class at home and abroad,” Roth said. “Workers need our own program and our own working-class party.”

“I’ll help in any way I can,” Pou said, as she signed up for a Militant subscription and purchased Are They Rich Because They’re Smart? by SWP National Secretary Jack Barnes.

“I’m very pleased to hear about efforts to build a working-class movement and political party,” Ameley Sultana told Communist League member Hugh Robertson when he knocked on her door in London’s Tower Hamlets March 27. Referring to the fight to  defend Ukraine, she said that Bangladesh, where her family’s from, “wouldn’t exist were it not for a revolutionary struggle by the people there for independence and sovereignty.”

Robertson said that “the first country to recognize Bangladesh after their 1971 battle for independence from Pakistan was Cuba. Through its revolutionary struggle, Cuba’s workers and farmers established their own government, uprooted capitalist social relations and transformed themselves in the process. That’s really the only way to prevent the capitalist rulers’ march toward devastating economic crisis and war.” Sultana got a Militant subscription.

Two days earlier in Belfast, Northern Ireland, Eoin McCaul, a student at Queens University, met CL members Hugo Wils and Jonathan Silberman. They discussed the impact that Moscow’s invasion of Ukraine is having on the drive by the capitalist rulers in Europe to rearm and the dangers this poses for the working class.

“Capitalism is preparing for a catastrophe that threatens the entire culture of humanity,” Silberman said. “This points to the necessity of building a proletarian party that can lead the working class in a revolutionary struggle for power.”

McCaul purchased a Militant subscription and five of the books on special — Malcolm X, Black Liberation, and the Road to Workers Power; Cuba and the Coming American Revolution; The Turn to Industry: Forging a Proletarian Party; Tribunes of the People and the Trade Unions; and Labor, Nature, and the Evolution of Humanity. He plans to join CL members in reaching out with the Militant and books like these.

As party members go door to door, introducing the Militant and revolutionary literature to working people, many are open to making donations to the Militant Fighting Fund. Donations can be sent directly to the Militant at 306 W. 37th St., 13th floor, New York, NY 10018, or online at www.themilitant.com.

What sort of Anti-War Campaign (2) – A broad campaign?